Growing up in Beaumont, Texas, with an uncle who worked at NASA, Squire Booker’s first childhood scientific love was astronomy. Another uncle was a math professor at a local university, and between the two, Booker’s lifelong interest in science was sparked.

After studying chemistry at Austin College, Booker earned his Ph.D. from the Massachusetts Institute of Technology. He researched an enzyme involved in DNA synthesis called ribonucleotide reductase that uses free electrons, called radicals, to facilitate a chemical reaction — this was his introduction into the world of radical chemistry. 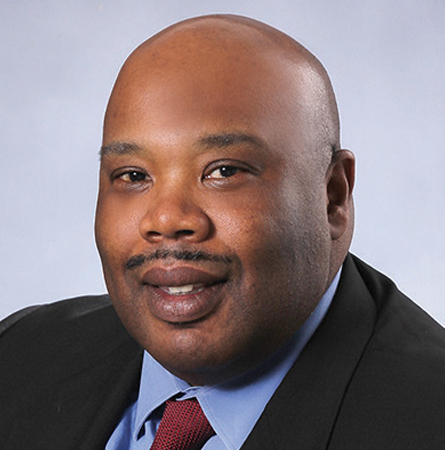 After graduate school, Booker went to Paris on a National Science Foundation–NATO fellowship to do research at the Université René Descartes and then took a second postdoc at the University of Wisconsin in the Institute for Enzyme Research. There, he continued to study how enzymes use radicals to catalyze reactions.

“During my second postdoc, doing enzyme research, was when I started getting interested in iron–sulfur clusters and how they were involved in radical chemistry,” Booker said.

Enzymes that rely on radicals can generate and use the radicals in many different ways, some depending on associated groups called co-factors. Around the time Booker was starting his second postdoc, a researcher at Wisconsin described a new mechanism that enzymes use to make radicals that involves iron–sulfur clusters, a widespread and ancient metal co-factor, and a molecule called S-adenosylmethionine, abbreviated SAM. The radical SAM superfamily was named after this discovery.

“The radical SAM superfamily of enzymes just blossomed into this incredibly large group of enzymes that catalyze an amazing array of different types of reactions,” Booker said. “And they all need to have iron–sulfur clusters to generate the radicals.”

Booker, now a professor at the Pennsylvania State University and a Howard Hughes Medical Institute investigator, has dedicated much of his research to understanding the structure and function of enzymes with iron–sulfur clusters, with particular focus on radical SAM enzymes. In recognition of his work, Booker has won the American Society for Biochemistry and Molecular Biology’s 2023 ASBMB–Merck Award, which honors outstanding research in biochemistry and molecular biology.

In his letter of nomination for the award, Penn State colleague J. Martin Bollinger credited Booker’s deep curiosity, technical acumen, creativity and courage with allowing “him to lead and even transcend the field” of enzymology research. Vahe Bandarian, a professor at the University of Utah, added that “Squire has the gift of being able to collaboratively solve complex problems.”

Of his research career, Booker said he has enjoyed the freedom to study what he’s most interested in.

“Other than scientific freedom, the other enjoyable aspect (of research) is working with and training young people and students,” he said, “and seeing them blossom into incredible scientists themselves and do incredible things on their own.”

Throughout his career, Booker has been committed to supporting young scientists, particularly those from historically underrepresented backgrounds. He helped establish and currently serves as principal investigator for the ASBMB Interactive Mentoring Activities for Grantsmanship Enhancement, or IMAGE, workshop program, which is designed to teach early-career scientists and postdoctoral fellows how to write effective grant proposals.

Booker also serves on the advisory board and as a mentor for the ASBMB’s Maximizing Opportunities for Scientific and Academic Independent Careers, or MOSAIC, program, a National Institutes of Health–funded effort to enhance diversity within the academic biochemical research community.

In recognition of his work related to advocacy and outreach, Booker is also the recipient of the ASBMB’s 2023 Ruth Kirschstein Diversity in Science Award. This is the first time a single person has received two ASBMB awards in the same year — a testament to Booker’s character and consistent efforts to advance science and expand the research community.

In her nomination letter for the Kirschstein award, Ruma Banerjee, a professor at the University of Michigan, described Booker as an “inspiring role model” and praised his “tireless and outstanding contributions to advancing STEM diversity.”

Booker said he was happy when he found out about both awards.

“I’m always excited to be recognized for my science, so I was thrilled about the Merck award,” he said. “I think my award and the Avanti Award in Lipids given to Russell Debose–Boyd is the first time an underrepresented minority (or at least an African American) has gotten a science award from ASBMB.”

Booker was on the ASBMB team that helped conceptualize and implement the Kirschstein award, which he said was intended originally to help underrepresented minorities gain recognition and have a chance to give award talks at the society’s annual meeting. The 2023 award recognizes his long-standing efforts to make the sciences a more diverse and equitable place.

“I’m happy to get this particular award as well,” Booker said. “I’m happy that (the awards committee) recognized that I do the best I can to contribute to outreach to scientists.”

Chemical bonds are essential for holding chemical entities together — without these connections, life would be impossible. Covalent bonds are the strongest bonds in nature and are formed when two atoms share their electrons. The bond formation process varies greatly and often relies on enzymes that can help move around single electrons, called radicals.

During his award talk for the 2023 ASBMB–Merck Award, Squire Booker plans to focus on how enzymes can tackle the feat of forming a covalent bond between two chemically inactive carbons. Carbon is present in all known life forms, and the formation of bonds between carbon atoms is therefore an essential process.

Booker’s research on enzymes that contain iron–sulfur clusters, which are an ancient and versatile group associated with many proteins and enzymes, has yielded clues about how these enzymes can use radicals to form carbon–carbon bonds. Specifically, he has found that iron–sulfur proteins that also use a molecule called S-adenosyl-L-methionine, or SAM, are capable of producing the chemistry needed for covalent carbon–carbon bond formation. His talk will focus on his research leading to this discovery.

Creating a community for all

In addition to moving science forward in the lab, Squire Booker is committed to improving the scientific community as a whole. He has been involved in numerous outreach and advocacy activities throughout his career, including many with the ASBMB. He is a former chair and longtime member of the society’s Minority Affairs (now Maximizing Access) Committee, and last year he was named a member of the inaugural class of ASBMB fellows.

Outside of the ASBMB, Booker serves on the steering committee of the American Biomedical Research Conference for Minority Students, and at Penn State, he is director and co-chair of the National Science Foundation’s Research Experience for Undergraduates program and chairs the Department of Chemistry’s Climate and Diversity Committee.

Booker said he also takes time to reach out to scientists who are members of historically underrepresented groups to let them know he is available to provide guidance and support. During his talk for the Kirschstein award at Discover BMB 2023 in Seattle, he plans to highlight his research on antibiotic resistance while also focusing on outreach activities.