The gut microbiome comprises trillions of symbiotic micro-organisms that reside in our gastrointestinal tract and perform biochemical functions that affect metabolic health. Each individual’s microbiome is unique, and microbiome imbalance is associated with disorders such as inflammatory bowel disease and celiac disease.

Diet influences gut microbiome composition, and researchers have found that macronutrients such as carbohydrates, protein and fats are key mediators of this influence. Lipids are a major macronutrient, yet scientists know little about how individual classes of dietary lipids interact with the microbiome.

Elizabeth Johnson studies sphingolipids, a class of lipids that consist of a sphingoid backbone attached to a fatty acid via an amide bond. Sphingolipids not only are present in most foods and synthesized from scratch by the host tissue but also are produced by gut microbes themselves. This raises some questions: How do dietary sphingolipids interact with the micro-organisms that do and do not produce sphingolipids? Are they assimilated into the microbiome? If so, how do they influence microbial metabolism?

The Johnson lab developed a methodology called bio-orthogonal labeling-sort-seq-spec, or BOSSS, for identification and fate-mapping of dietary sphingolipids in the gut microbiome. Sphingolipids were synthesized with an alkyne tag, making them distinguishable from the body’s sphingolipids and those in the host microbiome. The researchers fed the tagged sphingolipids to mice and conjugated fluorescent dyes to the tagged metabolites using click chemistry. They used fluorescence-activated cell sorting to isolate microbes that took up the alkyne-tagged sphingolipid metabolites and those that did not and further identified them using 16S rRNA gene sequencing. 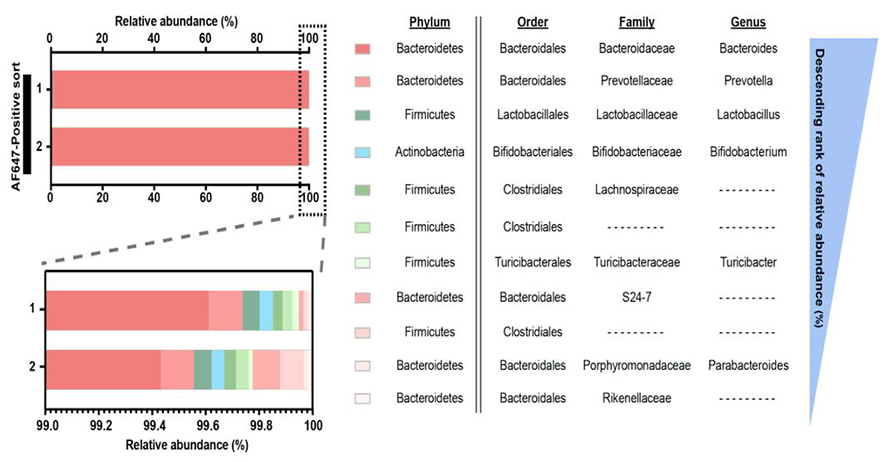 Johnson et al./JLR
This image illustrates the identification of the sphingolipid interactors of the microbiome. The bar graphs on the left show the relative abundance at the genus level, with the focused bar chart elucidating the microbial diversity of the minor fraction (1%) of the sphingolipid-interacting fraction. The microbiome members have been sorted in decreasing order of relative abundance.

Min-Ting, first author on the paper published in the Journal of Lipid Research, looks forward to following up on their recent findings.

“We will next investigate the molecular consequences of sphingolipid consumption in infants and in our mouse models,” she said. “Furthermore, we will be using our BOSSS methodology to investigate how other lipids, for instance cholesterol, can shape the microbiome.”

Johnson believes such work has implications for microbiome-related nutrition.

“We hope other researchers studying nutrition can apply our technique to their own research,” she said. “By determining how the microbiome might be interacting with different metabolites, we can ultimately use diet to positively influence our microbiome composition. This way we can really revolutionize the field of precision medicine.”