The purple cone snail, Conus purpurascens, hunts fish and uses venom to immobilize its prey. Cone snail venom contains diverse toxic peptides, or conopeptides, that are biologically active, target-specific and valuable for drug discovery. One of the most powerful known painkillers, ziconotide, marketed as Prialt, was derived from a conopeptide. 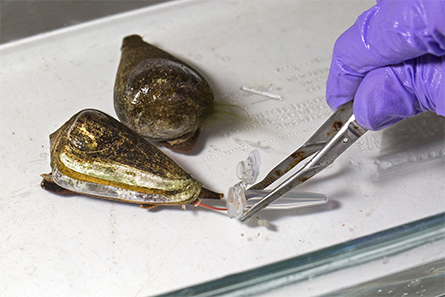 Alex Holt/NIST
A purple cone snail uses its harpoon to pierce through a latex-covered tube,
allowing a researcher to collect its venom.

Conopeptides vary among the more than 800 cone snail species and among members of the same species. Even a single cone snail specimen can produce unique conopeptide cocktails, called cabals, specialized for predation or defense. Cone snails also can hypermodify conopeptides at the post-translational step, increasing the diversity of the toxins and extending their range of biological targets. The extreme diversity of conopeptides provides a rich source of biologically active molecules for drug discovery.

In a recent study in the journal Molecular & Cellular Proteomics, Meghan Grandal and colleagues at the National Institute of Standards and Technology collected and analyzed the injected venom from 27 specimens of the purple cone snail. Using high-resolution mass spectrometry techniques, they discovered 543 unique conopeptides derived from 33 base peptide sequences — 21 of which were newly identified base peptides. An abundant and newly discovered conopeptide named PVIIIA illustrates the complexity and diversity of modifications to the base conopeptide that occur among various purple cone snail specimens. Building on previous studies, the researchers showed that the different snail specimens produce one of two unique venom cocktails. These two cocktails correspond to what are known as the “lightning strike cabal” that rapidly induces paralysis of the snail’s prey and the “motor cabal” that acts more slowly to induce irreversible paralysis.

Knowing which conopeptides are co-expressed within a specific cocktail will give the researchers important clues as to the possible neural targets of newly identified conopeptides. This will be a critical step in developing new conopeptides into neural probes or therapeutics.

The demand for kidney transplants exceeds the supply of available kidneys. Some donated kidneys go unused, however, due to the prolonged time between circulatory arrest and the start of cold storage. These kidney grafts often fail or are slow to function. Repairing such kidneys before transplant could greatly increase the available supply.

Kidneys donated after circulatory death are especially susceptible to injury due to low temperatures and lack of oxygen in conventional storage methods, such as static cold storage. An improved method, normothermic ex vivo kidney perfusion, or NEVKP, preserves kidneys at normal physiological temperature with nutrient and oxygen flow. NEVKP shows promise at improving kidney transplant function, but researchers do not know the molecular basis for this improvement yet. In a new paper in the journal Molecular & Cellular Proteomics, Caitriona McEvoy and colleagues at the University of Toronto describe using pig models of donation after circulatory death to compare global protein expression in transplanted kidneys after NEVKP and static cold storage. Using mass spectrometry and pathway analysis, they found that NEVKP increased expression of proteins linked to mitochondrial metabolism while it decreased markers of kidney injury. They propose that peroxisome proliferator–activated receptors, or PPARs, are master regulators of these effects. These findings suggest therapeutic targets for improving kidney transplant outcomes.

An unusual type of protein glycosylation, C-mannosylation, involves attaching a single mannose sugar to the amino acid tryptophan by a carbon–carbon bond. C-mannosylation, which regulates protein secretion, folding and function, occurs at a specific sequence of four amino acids that begins with the modified tryptophan. Even though about 18% of secreted or transmembrane proteins have this sequence, few studies have looked for the modification. Consequently, researchers know of few proteins that are C-mannosylated.

In a new study in the journal Molecular & Cellular Proteomics, Karsten Cirksena of the Institute of Clinical Biochemistry and a team of researchers in Germany found numerous proteins with altered secretion levels in cells lacking the C-mannosylation machinery. One of these potentially C-mannosylated proteins, a disintegrin and metalloprotease with thrombospondin motifs, or ADAMTS16, is essential during eye development and optic fissure closure. In Chinese hamster ovary cells and Japanese rice fish, the researchers demonstrated that ADAMTS16 can be C-mannosylated, that its secretion depends on C-mannosylation and that loss of a C-mannosylation enzyme causes a developmental eye defect known as a partial coloboma — a gap in the eye tissue. Their findings suggest that C-mannosylation, an understudied protein modification, plays a critical role in eye development by regulating secretion of ADAMTS16.