Turning to sugars to detect cancer. Creating a new tool to understand protein modification. Finding out how a multimer behaves in sepsis. Read about recent papers on these topics in the journal Molecular & Cellular Proteomics.

With nearly 50,000 deaths each year in the U.S. and only a 9% five-year survival rate, pancreatic cancer has one of the worst prognoses of all cancers. At the heart of this is the difficulty in detecting pancreatic cancer early; most patients are diagnosed after the disease is already advanced. The carbohydrate-associated molecules CA19-9 and sTRA have shown value in tracking disease progression but cannot be used to identify pancreatic cancer early or specifically, highlighting the need for other biomarkers.

Recently, researchers have found that, while historically understudied, the coating of carbohydrates on the surface of cells (called the glycocalyx), and particularly a family of these carbohydrates called N-glycans, are associated with pancreatic cancer. New data from Colin McDowell and collaborators at the Medical University of South Carolina and the Van Andel Research Institute, published in Molecular & Cellular Proteomics, provide early insights into the promise of these N-glycans as a potential new biomarker. McDowell and his colleagues used mass spectrometry to detect and differentiate N-glycans. Their research shows that N-glycans have increases in several modifications, including sialylation, poly-LacNAc extensions and branching, that vary in healthy, necrotic and tumor tissue.

The range and complexity of N-glycan modifications likely will preclude any one species from serving as a definitive biomarker of pancreatic cancer; an N-glycan signature is likely the key. The current study also is limited, with some N-glycan species too large to be identified. Despite these drawbacks, the complementarity of this N-glycan evaluation to CA19-9 and sTRA evaluations could improve confidence in tumor detection. The researchers are working to characterize further the role of N-glycans in pancreatic cancer. With an increased understanding of their relation to tumor formation, N-glycans could provide an important diagnostic tool in improving pancreatic cancer detection and, ultimately, saving lives. 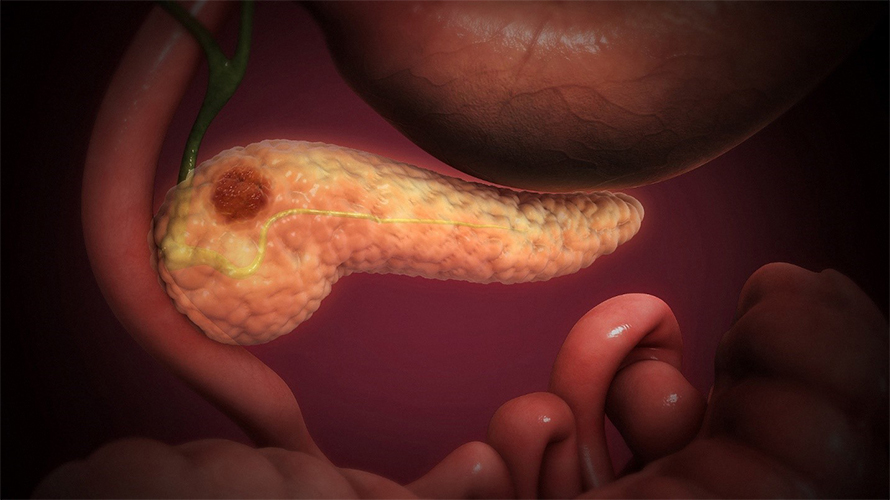 Scientific Animations Inc./Wikimedia
With pancreatic cancer a leading cause of death and hard to detect, an acute need exists for better early biomarkers of disease.

While the role of proteins in biology is quite familiar, scientists know less about the importance of post-translational modifications, or PTMs. These PTMs involve the addition of different molecular groups to the protein amino acid chain and are crucial for protein function. However, with 20 types of amino acids and dozens of PTMs, identifying PTMs in complex mixtures remains a major scientific challenge.

Open searching, a methodology to identify PTMs in complex mixtures without prior knowledge of which may be present, is a valuable approach in proteomics. Daniel Geiszler and a team from the University of Michigan have developed a new tool, PTM-Shepherd, to optimize and improve on this methodology.

As described in a paper published in Molecular & Cellular Proteomics, PTM-Shepherd was able to use small protein mass shifts detected by mass spectrometry to identify PTMs, distinguishing modifications differing in mass by as little as 1/400th of a carbon atom. Using the PTM-Shepherd tool, researchers could identify artifacts in protein synthesis and detect differences in presumably identical proteins based on the source lab. PTM-Shepherd could be a strong new tool both for protein synthesis quality control and for identifying rare/novel PTMs in biological research.

A proteomic evaluation of PTX3 behavior in sepsis

Sepsis is a deadly condition brought on in response to infection, with 270,000 yearly deaths associated with the complication in the United States alone. Researchers have found that formation of pentraxin-related protein PTX3 multimers (particles composed of multiple copies of a single PTX3 protein) is associated with mortality in sepsis; however, they do not understand fully yet how these multimers are formed. Now new research by Sean Burnap at King's College London and an international team provides novel insights into the role of PTX3 in sepsis.

As published in Molecular & Cellular Proteomics, human and mouse models along with mass spectrometry were used to interrogate the effect of lipopolysaccharide, or LPS (an endotoxin that can cause sepsis), on PTX3 behavior. As expected, higher levels of PTX3 multimers were seen after introduction of LPS, with this increase correlating with increases in proteins derived from neutrophils (white blood cells). In fact, mice without key neutrophil enzymes still showed an increase in PTX3 multimers in response to LPS. Instead of being synthesized in response to LPS, PTX3 multimers appear to be stored in neutrophils and deposited on aortic vessel walls. This improved understanding of PTX3 behavior could provide insights toward development of new treatments for acute sepsis.