The glycome’s role in a malignancy 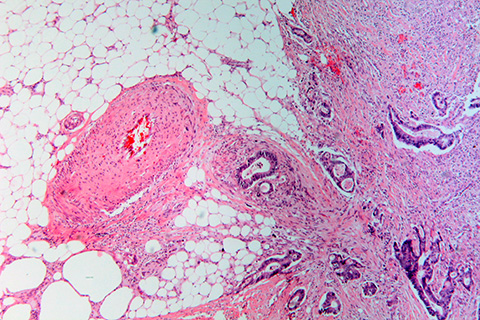 Patho/Wikimedia Commons
Altered glycosylation in cells could be associated with the malignant transformation in colon cancer.

Colorectal cancer, or CRC, is the leading cause of cancer death worldwide. The disease takes many forms and is difficult to diagnosis and treat. By identifying biomarkers, researchers hope to better understand CRC’s progression and find effective therapies. One clue might be provided by the covalent attachment of complex sugar molecules such as glycans. Researchers have seen that altered glycosylation can be associated with colon cancer becoming malignant.

The team found that GSL expression varies among different cell line classifications: Undifferentiated CRC cell lines were characterized by a high abundance of specific antigens that corresponded to the blood type of the person they were derived from. On the other hand, differentiated CRC cell lines contained prominent GSL glycans such as (sialyl)-LewisA/X and LewisB/Y antigens. By combining glycomics data with transcriptomic analysis, the researchers found a strong correlation between Lewis antigens in CRC cells and increased levels of glycosyltransferase FUT3 and numerous transcription factors, both of which influence colon differentiations. This could explain how GSL glycans can influence differentiation in conditions such as CRC.

This study, recently published in the journal Molecular & Cellular Proteomics, can serve as a resource for future research on biomarkers for CRC and pave the way for further studies.

Why are two cancer drugs better than one?

Two of the most often dysregulated signaling pathways in cancer are PI3K-mammalian target of rapamycin and mitogen-activated protein kinase/ERK kinase/mitogen-activated protein kinase, known as MEK/MAPK, so researchers developed inhibitors of these pathways to treat specific cancer types. However, many of these inhibitors are ineffective because downstream pathways compensate for the drugs’ anticancer activities, leading to drug resistance. This problem is being addressed by pairing synergistic therapies with both PI3K/AKT and MEK/MAPK inhibitors, but scientists have yet to understand fully why these combined treatments are more effective.

Maruan Hijazi and a team at Queen Mary University of London and the Alan Turing Institute used liquid chromatography-tandem mass spectrometry–based phosphoproteomics to learn why PI3K and MEK inhibitors work synergistically against cancer. Using cancer cell lines, they found that eukaryotic elongation factor 2 kinase, or eEF2K, a key convergence point downstream of MAPK and PI3K pathways, facilitated synergy during cotreatment with the drugs trametinib and pictilisib (which target specific MEK and PI3K kinases, respectively). Inhibitors of PI3K and MEK work together to inactivate eEF2K by phosphorylation and slowing its protein synthesis.

These studies, recently published in the journal Molecular & Cellular Proteomics, showed that eEF2K activity is a critical mediator of responses to PI3Ki plus MEKi and is a potential biomarker to predict whether combined treatment will be effective for certain cancers. 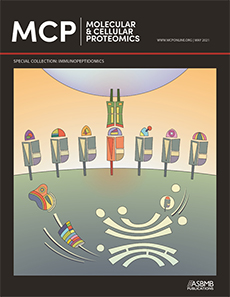 In the 1970s, Baruj Benacarraf and Hugh McDevitt described the regulation of the immune response by the major histocompatibility complex, or MHC, a group of genes that code for proteins found on the surfaces of cells. The MHC locus is the most polymorphic region of the human genome. With this diversity, MHC molecules are able to present a wide distribution of antigen peptides to T cells, which discriminate self and nonself from many of these antigen peptides. Environmental stimuli and proteolytic enzymes in distinct cell organelles shape these antigen peptides’ biogenesis.

The isolation and characterization of these MHC-bound peptides, most commonly using liquid chromatography and mass spectrometry, is called immunopeptidomics. In an editorial introducing a special issue on immunopeptidomics in the journal Molecular & Cellular Proteomics, Pierre Thibault and Claude Perreault describe this evolving field and recent developments in immunopeptidomic workflows encompassing enrichment and labeling strategies, mass spectrometry acquisition methods, sequencing and allele prediction software. They write that challenges with current methodologies include standardization and sensitivity of the techniques.

With advances in technology, immunopeptidomics provides new opportunities for basic and applied research in immunology. Such improvements especially benefit the field of immuno-oncology, where research can improve the efficacy of immunotherapies, including therapeutic vaccines and bispecific T-cell engagers.