Making heads or tails of flatworm regeneration. Lighting the path to discovery of dark immunopeptides. Exploring the relations between acylations. Read about papers on these topics recently published in the journal Molecular & Cellular Proteomics.

Flatworms have the extraordinary ability to regrow most of their bodies — even a new head and tail — after amputation. Humans can only regenerate certain tissues, mainly the fingertips and liver. If we understood how to turn on regeneration in humans, we potentially could activate it to restore other damaged tissues and organs. 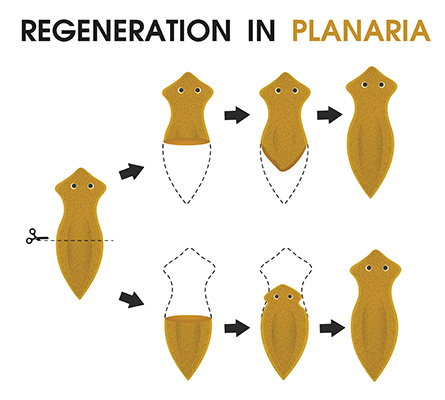 Cut in half, the flatworm Schmidtea mediterranea regenerates into two complete worms.

Regeneration only occurs when cells are in the right environment. The extracellular matrix, a scaffold that covers the outside of cells, could lay the foundation for new tissue growth and carry the biological signals that turn on regeneration. But researchers do not know which components of the extracellular matrix enable organisms like the flatworm to regenerate lost or damaged tissue.

In a recent study published in the journal Molecular & Cellular Proteomics, Ekasit Sonpho and colleagues at the Stowers Institute for Medical Research used three techniques to remove the cells of Schmidtea mediterranea, a type of flatworm, leaving behind a purified extracellular matrix. Performing liquid chromatography with tandem mass spectrometry, the researchers identified proteins in the flatworm’s extracellular matrix, with each isolation technique enriching for a different set of proteins. After knocking down 39 candidate extracellular matrix proteins in S. mediterranea by RNA interference, one protein — heparan sulfate proteoglycan — emerged as a key factor in tissue regeneration. Its presence enabled flatworms to survive in the early days after tissue injury.

The authors highlight the feasibility of using S. mediterranea as a model system for studying the function of the extracellular matrix, particularly in whole-body regeneration. Compared to other regenerative model organisms, such as axolotls and zebra fish, researchers can use flatworms to more easily identify extracellular matrix proteins and determine their roles in regeneration through loss-of-function screens. These new tools could give us clues to the process of regeneration and its potential applications for human health.

Lighting the path to discovery of dark immunopeptides

Immune system T cells can recognize and destroy cancer cells. Most cells break down some of their own proteins into short peptides, called immunopeptides, which they present to T cells like showing an ID. When a cancer cell presents a mutated immunopeptide, T cells recognize it as a fake ID and trigger an immune response to destroy the cancer cell. These mutations could allow scientists to target T cells directly to cancer cells. But researchers have found it challenging to identify the immunopeptides with mutations or other alterations because their sequences do not match the conventional sequences in protein databases. Lacking easy detection, they are known as dark immunopeptides.

Exploring the relations between acylations

One type of protein modification, known as acylation, or the addition of an acyl group, can occur at the side chain of lysine residues. Acyl groups come in several varieties, including acetyl and succinyl groups. Acylation can impact a protein’s function drastically by regulating its activity, stability and location within the cell. Researchers don’t know if different acylations work together to perform their biological roles in gene transcription, metabolism and aging.

Yujiao Yang, Hong Zhang and colleagues at the Chinese Academy of Sciences used immunoaffinity to enrich for proteins with modified lysine and mass spectrometry to quantify global acetylation and succinylation of the bacteria Streptomyces coelicolor. Their publication in the journal Molecular & Cellular Proteomics shows that many lysine residues can be both acetylated and succinylated, suggesting that they could compete to modify the same lysine. Of the proteins with lysine acylations, approximately 75% were both acetylated and succinylated, either at the same lysine or different lysine residues. For central metabolism proteins, the percentage was even higher. Knocking out the desuccinylase ScCobB2, which removes succinylation, also affected protein acetylation, suggesting there is crosstalk in regulating lysine acylations. Overall, the authors provide new protein targets for studying lysine acetylation and succinylation in metabolism.