He has won the ASBMB’s William C. Rose Award

Factories apply high heat and tremendous pressure to turn atmospheric nitrogen into ammonia — something bacteria do every day at ambient temperatures in the dirt, powering the global nitrogen cycle. 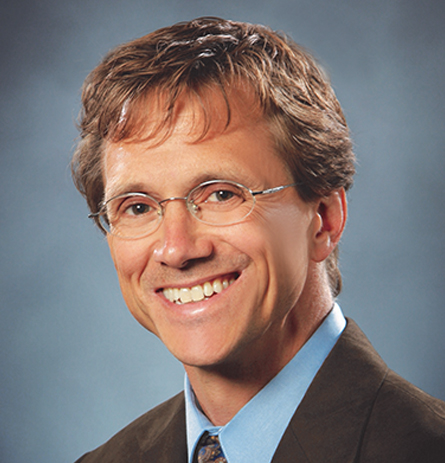 Martin Bollinger doesn’t work on the nitrogen cycle. But he does use it to explain to undergraduates the tremendous power of redox metalloenzymes, such as the ones nitrogen-fixing microbes use. He, too, seems to favor an environment that gets things done with less heat and pressure than commonly are considered necessary.

His joint group with Carsten Krebs reported recently in the journal Science the mechanism a microbial enzyme uses to make ethylene, a two-carbon molecule used as a building block in numerous industrial syntheses, which currently is produced from natural gas or petroleum.

“It’s the coolest mechanism I’ve ever been involved in working out,” Bollinger said, then paused to add that he had no hand in the experiments — it was all the work of student Rachelle Copeland, with an assist from postdoc Shengbin Zhou. “That was a great mentoring story,” Bollinger said, “because all we did was get out of her way.”

Talk to him long enough and you’ll notice this is a habit: Bollinger always mentions not just the experimental work done in his laboratory but the name of the trainee or colleague who did it.

Bollinger is the recipient of the American Society for Biochemistry and Molecular Biology’s 2022 William C. Rose Award, which recognizes outstanding research contributions and a demonstrated commitment to mentoring. Colleague Squire Booker nominated Bollinger for the Rose Award. “Marty has been an incredible mentor to students and postdocs, and particularly women and women of color,” Booker noted.

Bollinger founded a bioinorganic chemistry research group at Pennsylvania State University. According to Booker who was the second member of the group, Bollinger has been key in lobbying university administration on its behalf.

Colleague Joseph Cotruvo Jr. wrote in a recommendation letter, “Marty has been the guiding force in turning Penn State into a powerhouse in bioinorganic chemistry — the best place in the country, and probably the world, to do research in this field.”

Contributing to a tight-knit group of researchers and its collaborative culture, Bollinger said, is one of his proudest accomplishments. “I’m sure it’s not completely unique, but it’s very, very rare. … It comes from a common mindset where it’s not all about me; it’s about everyone succeeding, and keeping your ego in check, and promoting younger people.”

After receiving the Rose Award, Bollinger said, he spent some time reading up on its namesake, William C. Rose. He was taken with a series of experiments Rose conducted to determine which amino acids are essential. Many of these studies involved feeding young men, mostly recruited from Rose’s own students, foul-tasting chemically defined mixtures lacking certain amino acids to determine which were essential for human biology. Rose monitored the students’ nitrogen balance and their self-reported energy levels. After establishing that there are nine amino acids that humans cannot synthesize and must extract from the diet, Rose joined dietary recommendation panels, disseminating the knowledge in public health contexts.

“Reading about this work in the last few days, I fondly recalled conversations with my late first wife, Wendy, who studied human nutrition when we met as undergraduates at Penn State,” Bollinger said. “Some of our earliest talks were about complementing proteins in vegetarian and vegan diets. That is directly from Will Rose’s work.

“You think of how esoteric some of my work — and just science in general — can be these days,” he said. “To remember back to that kind of fundamentally important-to-society work is a thrill.”

Multiple activities from a pared-down source

Among other metalloproteins, Bollinger’s research group studies mononuclear nonheme iron oxygenases, enzymes that depend on one iron ion that is not coordinated by a porphyrin. Enzymes in this class can add hydroxyl groups, convert single bonds to double bonds, create or expand rings, or generate special functional groups such as endoperoxides or isonitriles — and sometimes do more than one of these transformations, depending on which substrate they are presented.

“The overarching goal has been to understand how you can, from essentially one structural scaffold and a simple cofactor and co-substrate, elicit these multiple activities,” Bollinger said of his work.