He has won the 2022 Walter A. Shaw Young Investigator Award in Lipid Research

While trying to develop a research program that would differentiate his own lab from his postdoctoral mentor’s, he set out to determine the structure of phospholipase D. 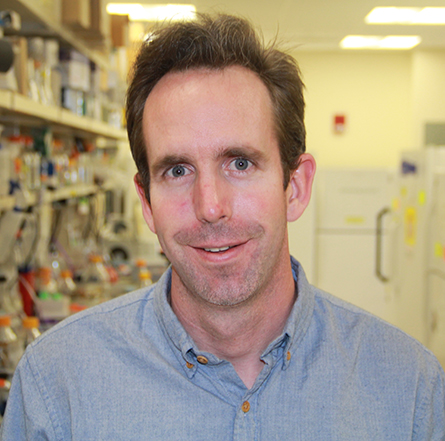 “I cautioned Mike that there was an elephant graveyard of grad students and postdocs who had attempted to solve these structures,” Michael Frohman, who had discovered the protein 20 years prior, wrote in a recommendation letter.

But Airola, who received the ASBMB’s 2022 Walter A. Shaw Young Investigator Award in Lipid Research, said, “I was optimistic … I thought, ‘we have a chance; we had an interesting idea, and I don’t think anyone has tried that, so we should try it.’”

That idea was to remove a section from the middle of the protein that appeared, based on its amino acid sequence, to have high intrinsic disorder. The more orderly portions left behind crystallized beautifully.

When it became clear that the approach would work, Airola said, he told graduate student Forrest Bowling, “It looks like you may have a successful Ph.D. project.” Bowling, he recalled, answered, “What do you mean, this ‘could be’ a Ph.D. project? Why do you think I joined your lab?”

Airola knew that not every graduate student answers their first research question — especially if it depends on crystallizing a protein. He had started his own dissertation interested in the structure of circadian signaling in human cells. “Through failure, I learned quite a bit,” he said.

He transitioned to a question about bacterial chemotaxis; studying a transmembrane signaling system got him interested in membrane biology, which brought him to Yusuf Hannun’s lab at Stony Brook University. It was a lasting match. As a postdoc, Airola determined the structure of two sphingolipid-metabolizing enzymes. Later, he landed a job as a professor at Stony Brook. Both Hannun and his wife and collaborator, the late Lina Obeid, were supportive and influential mentors, Airola said.

Airola’s own recent collaborations to boost graduate students and postdocs have included co-organizing a weekly virtual seminar series in lipid research that as many as 500 researchers attended at the height of pandemic lockdowns.

On the hunt for new structures

As a professor, Michael Airola has pursued new structures, focusing on lipid-modifying proteins — both phospholipase D and a phosphatase called lipin — that are important for signaling yet challenging to study. He is interested in lipid droplet proteins and in how new sequence-based structure prediction tools will help generate hypotheses about which parts of a protein might be critical to its structure. Could such tools, plus creative approaches, put hitherto impossible structures within reach?

“I’m very aware that some projects aren’t going to work,” Airola said. “But I also don’t want to work on things that are just easy.”

As a mentor, it’s a balancing act to help trainees select projects. “I try to help guide them through all the things I learned through failing to help them succeed — but then, we’re not afraid to say, ‘this isn’t working, let’s shelve it for a little bit and let’s try something else.’”

The strategy seems to work. In a letter nominating Airola for the Shaw award, Yusuf Hannun wrote, “All of his graduate students are excelling and driven, and everything they touch seems to turn to gold.”