Sharpee sees many ways of looking at a tree

You might not think a book called “Einstein Gravity in a Nutshell” would offer much insight into how the brain works. Tatyana Sharpee would disagree. 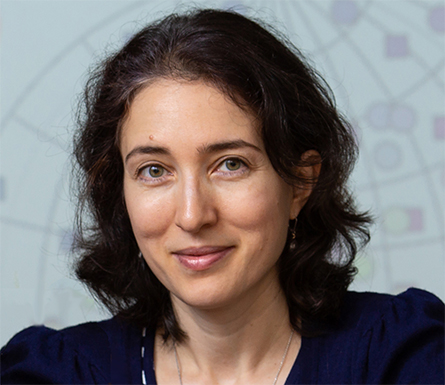 “For many years, this was my Saturday reading,” Sharpee said, smiling, after she pulled the book from her home office bookshelf during an interview. Nothing but the title suggests a nutshell-sized quantity of information; the tome is several inches thick and almost 900 pages long.

In a letter nominating Sharpee for the American Society for Biochemistry and Molecular Biology’s 2022 Delano Award for Computational Biosciences, fellow Salk professor Tony Hunter describes her studies as developing “a cohesive description of how biological systems strive for efficiency in information transmission at both local and network-wide scales.” A second letter from Duke neuroscientist Nicolas Brunel called her “one of the leading computational neuroscientists of her generation.”

Computational neuroscience is a fair distance from where Sharpee started. “I grew up wanting to be a physicist — that was the only option,” she said.

Her parents in Ukraine both were physicists, and her grandparents were mathematicians. She earned a Ph.D. in theoretical physics at Michigan State University before beginning a postdoc in computational neuroscience.

“The transition from physics to biology was not an easy one,” she said — not because the subject was more challenging but because stepping away from her lifelong intention to be a physicist provoked self-doubt and what she called “some kind of existential crisis.”

These days, however, she sees the switch as an opportunity to bring lessons learned in physics into a new field. “I think that’s the wonderful part about science; that you can start in one area, and then diffuse to other disciplines.”

Sharpee also derives insight from working with colleagues, whose diverse perspectives she values. “Because each one of us has a different trajectory in science, our approaches to the same problem will be different,” Sharpee said. “I hear, for example, that if you ask two photographers to photograph the same tree, the two photographs will come out very different. The same thing with scientists.”

Tatyana Sharpee, a professor at the Salk Institute who trained as a physicist before transitioning into computational neurosciences, uses many concepts drawn from physics and mathematics to explain biological phenomena.

Sharpee applies this conceptual framework to biological problems that involve compressing multidimensional information into relatively fewer dimensions — such as neural encoding of sensory input or visualizing the relationship between a disease and transcription of thousands of genes.

Receiving the DeLano award is gratifying, Sharpee said, in part because it recognizes her more recent forays from computational neuroscience into cellular and molecular biology questions.