A new way to measure lipoprotein(a). A new source of metabolized cholesterol. A new mode for counting ceramides. Read about articles on these topics recently published in the Journal of Lipid Research.

A better mode for counting ceramides

Ceramides are important lipids in the intercellular spaces of the stratum corneum, or SC, the outermost layer of the epidermis. These structurally varied and complex sphingolipids contain derivatives of sphingosine bases in amide linkage with a variety of fatty acids. Epidermal ceramides have varying chain length, type and extent of hydroxylation, saturation, and other variables. They play an essential role in structuring and maintaining the skin’s water permeability. 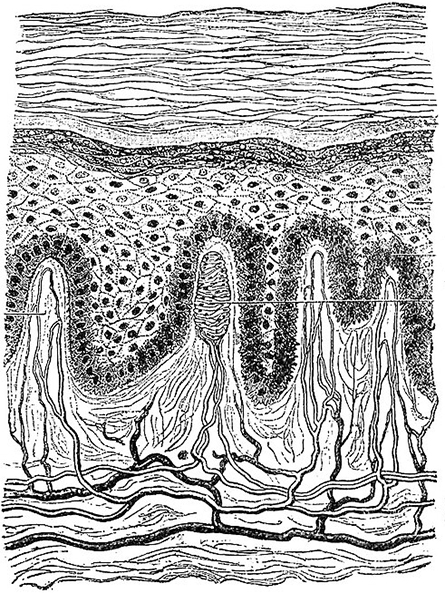 Henry Vandyke Carter /Wikimedia Commons
Researchers have found a new way to count ceramides in the stratum corneum,
the outermost layer of the skin, shown at the top of this illustration of all layers
of the epidermis.

Although researchers have found ceramides with long-chain bases, or LCBs, of various lengths in the stratum corneum, no one has published a quantitative analysis yet. Previous measures using liquid chromatography–mass spectrometry or liquid chromatography–tandem mass spectrometry, known as LC-MS and LC-MS/MS, have reported between 100 and 400 ceramide species. These studies have drawbacks, however; ceramide species are reported solely based on the sum of their LCB and FA chain lengths, or coverage of ceramide species is less thorough due to low sensitivity of product ion scanning analysis.

Madoka Suzuki and a team of researchers at Hokkaido University, Japan, recently conducted LC-MS/MS on SC ceramides using the specialized multiple reaction monitoring mode, which can detect and quantify multiple molecular species in a single measurement. Using this method, the researchers detected individual ceramide species differing in both the LCB and FA chain lengths and quantified the largest number of ceramide species reported to date (1,327 unbound ceramides and 254 protein-bound ceramides). Their recent study in the Journal of Lipid Research provides a molecular basis for elucidating human SC ceramide diversity and the pathogenesis of skin disorders.

A new way to measure lipoprotein(a)

Lipoprotein(a), or Lp(a), is a genetic risk factor for cardiovascular disease and aortic stenosis. Similar in composition to low-density lipoprotein, Lp(a) is characterized by the carbohydrate-rich apolipoprotein(a), or apo(a), which imparts distinct pathophysiological and metabolic characteristics.

Apo(a) contains repeated kringle structures, or KIV, which are protein domains that fold into large loops stabilized by three disulfide linkages. KIV are formed by 10 subtypes (KIV1 to KIV10), each present as a single copy except for KIV2, which is present in a variable number, ranging from one to more than 40 identical repeats, in different individuals Thus, people may inherit apo(a) molecular weight ranging from about 300 to 800 kilodaltons. This means plasma levels of Lp(a) will be over- or underestimated, making it challenging to measure Lp(a) levels accurately.

Santica Marcovina of Medpace Reference Laboratories and a team of researchers recently developed a new isoform-independent sandwich Lp(a) enzyme-linked immunosorbent assay, or ELISA, to measure Lp(a). The test captures Lp(a) with monoclonal antibody LPA4 primarily directed to an epitope in apo(a) KIV2 and detects it with monoclonal antibody LPA-KIV9 directed to a single antigenic site present on KIV9.

When tested on 64 samples with known apo(a) isoforms, the new assay performed as well as standard methods. A recent paper in the Journal of Lipid Research describes the development and validation of the assay, which the researchers believe will benefit research laboratories that are trying to eliminate the confounding bias generated by heterogenous apo(a) isoform sizes.

Uncovering a source of metabolized cholesterol

Patients with FLD have severe high-density lipoprotein deficiency, hypertriglyceridemia and an increased ratio of unesterified to total cholesterol. However, recent patient studies showed that despite the absence of LCAT activity, carriers have circulating cholesterol esters, or CEs, and their plasma levels are highly variable.

Chiara Pavanello of the Università degli Studi di Milano and a team of researchers evaluated the origin of circulating CEs in plasma samples from carriers of LCAT deficiency. To their surprise, they found that, in the absence of LCAT-derived CEs, CEs present in apoB-containing lipoproteins derived from hepatic and intestinal SOAT2. This work has been detailed in a recent publication in the Journal of Lipid Research.

This is significant because other studies have shown that the types of CEs that predominate in plasma contribute to the relative degree of atherogenicity (formation of abnormal fatty or lipid masses in arterial walls). For example, carotid intima-media thickness has been associated positively with the amount of circulating SOAT2-derived CEs, independently of other cardiovascular risk factors.