How does gastric bypass affect microRNA production? How does adiponectin fight fatty plaques? How is ceramide concentration sensed in cilia? We offer summaries of recent papers from the Journal of Lipid Research addressing these questions.

Over one-third of people in the United States are obese, putting them at increased risk for heart disease, stroke, diabetes and certain cancers. Bariatric surgeries, procedures performed on the stomach or intestines to induce weight loss, can help these individuals lose weight. The most commonly performed weight loss surgery, a gastric bypass, creates a small pouch from the stomach that connects directly to the small intestine. After the surgery, the usable portion of the stomach is very small, limiting the amount a person can eat. In addition, swallowed food bypasses most of the stomach and some of the small intestine, causing less food to be absorbed. 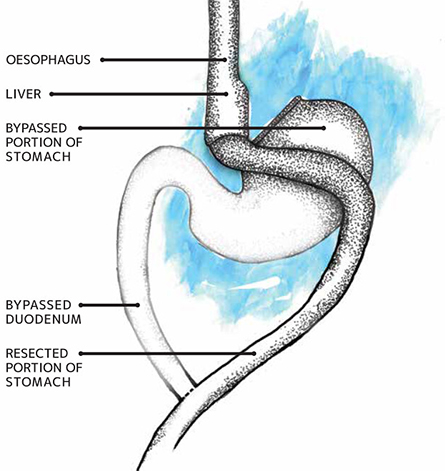 Sharad Patil/NIH Flickr
During a gastric bypass surgery, the top portion of the stomach is made into a small
pouch and connected directly to the small intestine, a process that decreases nutrient
absorption and eventually leads to weight loss.

Even before they lose weight, patients' metabolic and cardiovascular systems function better after the surgery. Jan Hoong Ho at the University of Manchester and a team of British and Australian researchers have discovered how high-density lipoprotein, or HDL, the so-called "good cholesterol," might be involved in this phenomenon.

Lipoproteins are small particles that carry cholesterol, other lipids, proteins and nucleic acid cargo between cells. HDL is considered helpful because it transports cholesterol out of tissues and to the liver, where it can be neutralized. However, researchers do not yet understand exactly how HDL controls the removal of cholesterol from tissues. Recently, researchers have found that HDL particles can carry microRNAs, short RNAs that impede the expression of genes. In a recent study in the Journal of Lipid Research, Ho and colleagues demonstrate that the microRNAs within HDL particles may confer the protective effects of gastric bypass.

The group showed that HDL's cholesterol efflux capacity is improved after gastric bypass, independent of weight loss, and that this improved function correlates with the levels of certain microRNAs within the HDL particle. The discovery of microRNAs that regulate the removal of cholesterol from tissues gives researchers a potential therapeutic avenue in the treatment of obesity and metabolic disorders.

The formation of fatty plaques in the arteries, called atherogenesis, can lead to problems such as heart attack, stroke or even death. Fat cells, called adipocytes, secrete a protein called adiponectin into the bloodstream, where it can block these fatty plaques from forming, but researchers do not yet know how adiponectin performs this protective function. In a recent study in the Journal of Lipid Research, investigator Akemi Kakino from Shinshu University and a team of Japanese researchers describe how adiponectin protects against atherogenesis by blocking the uptake of specific types of low-density lipoprotein, or LDL, that have atherogenic properties.

These atherogenic varieties, such as oxidized LDL and electronegative LDL, enter cells via scavenger receptors and trigger a cell signaling cascade that causes plaque formation. The researchers found that the more adiponectin there was in the cell culture medium, the less efficiently LDL could gain entry into the cells. The decrease in plaque-causing LDL uptake led to lower levels of LDL-induced atherogenic signaling cascades. The authors used the same concentrations of adiponectin found in the human body, strongly supporting the idea that blocking atherogenic LDL uptake is a physiological function of the protein and not just something that occurs in artificial laboratory conditions. Overall, the results provide insights into how adiponectin protects us from developing fatty arteries and offer a new therapeutic target in the treatment of atherosclerosis-related diseases.

Cellular cilia depend on an axle-and-spoke arrangement of microtubules for structural integrity, meaning that to generate cilia, a cell must synchronize microtubule and membrane extension. The plasma membrane lipid ceramide regulates the length of cilia and transport along growing cilia, but researchers have been uncertain of how ceramide concentration is sensed. 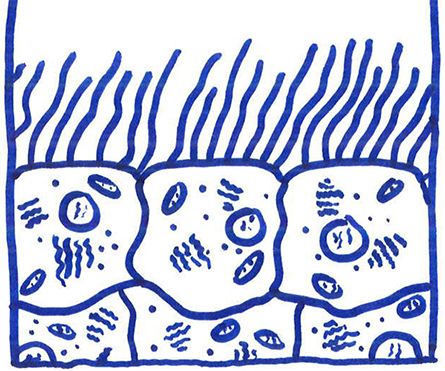 Esaah6/Wikimedia Commons
A recent article in the Journal of Lipid Research gives new insight into how cilia
are built.

In a recent article in the Journal of Lipid Research, Priyanka Tripathi and a team from the University of Kentucky report that lipid modification of cysteine residues on a microtubule protein allows direct binding to ceramide in the membrane. Microtubules are made up of two subunits, alpha tubulin and beta tubulin, each of which can be post-translationally modified. A subset of acetylated alpha tubulin is palmitoylated, and the researchers showed using immunoprecipitation and fluorescence microscopy that palmitoylation allows tubulin to bind to ceramide. It also helps tubulin recruit a GTPase involved in protein transport into the cilia.

The authors report that the interaction between ceramide and palmitoyl-tubulin is required for new cilia to form in human-derived neural progenitor cells, where they eventually mature into dendrites and axons. The interaction is also necessary for a distantly related eukaryotic algae to grow flagella.