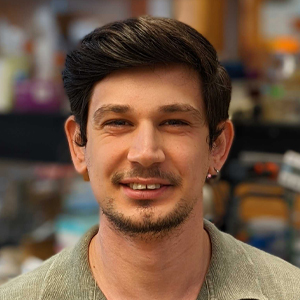 A molecule to recycle LDL. Reviewing sortilin’s role in disease. New mice help track PLD expression. Read about papers on these topics published recently in the Journal of Lipid Research.

A molecule to recycle LDL

Low-density lipoprotein, or LDL, sometimes is known as bad cholesterol. An elevated level of circulating LDL increases risk of myocardial infraction and stroke. Thus, the body must be able to clear LDL. 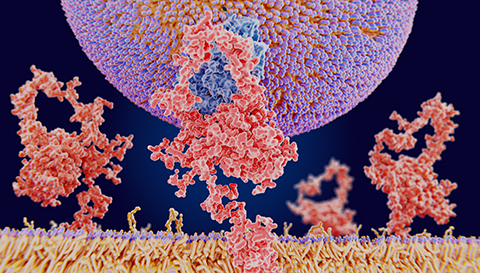 The LDL receptor (red) is a membrane protein found in almost every human cell. It binds to the apoprotein B from LDL particles and mediates their internalization, or endocytosis, in the cell.

The LDL receptor, or LDLR, molecule plays a major role in LDL clearance by binding to apolipoprotein B, a component of LDL, thus triggering intake, or endocytosis, of circulating LDL. The LDL then goes to a lysosome for hydrolysis, and the free LDLR is inserted back into the plasma membrane. This process is called recycling.

A number of proteins regulate LDLR expression and recycling. The small GTPase RAB10 is one of these, and RAB10 also is required for LDL uptake. Deleting RAB10 decreases endocytosis of LDL but increases accumulation of transferrin proteins, which play a role in iron metabolism in mammals.

Small GTPases cycle between inactive and active states. This molecular switching recruits effector proteins to membranes. Researchers have reported that RAB10 has a role in membrane trafficking in various cell types. And scientists know that RAB10 mediates insulin-stimulated transport of vesicles containing the glucose transporter GLUT4 to the plasma membrane.

Taslima Khan and a team at the University of Michigan recently investigated the role of RAB10 in LDLR and transferrin receptor, or TFR, recycling. Their study was published in the Journal of Lipid Research.

In this study, the group cited evidence that RAB10 promotes recycling of both LDLR and TFR: RAB10 depletion results in a decreased ratio of both receptors on the membrane without changing its expression and increased accumulation of both receptors in the cytoplasm, and RAB10 is colocalized with both receptors. The researchers suggest that RAB10 plays a broad role in trafficking, however, and thus targeting RAB10-mediated LDLR recycling is of limited therapeutic value.

Receptor-associated protein, or RAP, is a molecular chaperone that plays a role in folding and processing low-density lipoprotein, or LDL, receptors. Researchers have associated the glycoprotein sortilin, one of the binding partners of RAP, with Alzheimer’s, prion and Parkinson’s diseases and high cholesterol. Also, according to human genomewide association studies, the gene that encodes sortilin is associated with LDL cholesterol. However, researchers do not yet understand the mechanics of this association.

Kelly Mitok, Mark Keller and Alan Attie at the University of Wisconsin–Madison have reviewed the literature, focusing on sortilin’s sometimes confusing role in cardiovascular and metabolic diseases while outlining its structure, expression and regulation. Their review was published recently in the Journal of Lipid Research.

Phosphatidic acid, or PtdOH, is a phospholipid that plays a role in membrane fusion of secretory vesicle and granules. This negatively charged signaling molecule is recruited into microdomains, promotes membrane curvature and induces conformational changes in proteins. PtdOH interacts with proteins to regulate exocytosis in neuroendocrine cells and is involved in synaptic vesicle recycling in the mammalian central nervous system.   It can be synthesized by phospholipase D, or PLD, mediated hydrolysis of certain phospholipids.

Researchers who study PLD activity often see conflicting results in the localization and expression of isoforms PLD1 and PLD2 because the reagents used in these experiments are unreliable. To address this problem, Casey Barber and a team at the Johns Hopkins University School of Medicine genetically altered mice to express labeled PLD1 and PLD2. Using brain slices and neuron cultures from these mice, the researchers investigated expression and localization of the isoforms.

Their results, published in the Journal of Lipid Research, showed that while PLD1 expression is predominant in neurons, PLD2 is expressed mostly in glial cells. The researchers also observed that overexpression of PLD1 reduces complexity of dendritic arborization and that PLD1 inhibition increases dendritic branching. Moreover, they found that PLD1 is expressed in the retina, although they do not know its role there. Overall, the group learned about the role of PLD in neurons and in glial and retina cells. And their genetically altered mice can be used for future studies of localization and expression of different tissues.

Meric Ozturk is a first-year Ph.D. student in biochemistry at Iowa State University.