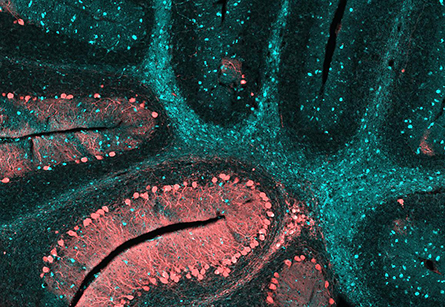 Eunice Kennedy Shriver National Institute of Child Health
and Human Development, National Institutes of Health
Cerebellum of a mouse brain in the late stages of Niemann–Pick type C1 disease.
The dense lipid pockets shown in blue are due to reduced cholesterol transport.

The glycoprotein Niemann–Pick type C1, or NPC1, functions in intracellular cholesterol transport. Mutation of this protein hinders its folding and trafficking between organelles, which leads to reduced cholesterol transporting and subsequent accumulation. This disorder can have early- or late-onset consequences ranging from death in infancy to adult neurodegeneration. No treatment exists for NPC1 disorder; trials of intrathecal therapies only slow disease progression.

Previous research showed that histone deacetylase, or HDAc, inhibitors offered some correction for the NPC1 mutant in cells. Researchers believed this was caused by changes in molecular chaperone activity, in particular HSP70 and HSP90, in the presence of HDAc inhibitors. In a recent publication in the Journal of Lipid Research, Nina Pipalia of Weill Cornell Medical College and a multi-institutional team investigated the effects of HSP90 inhibition on NPC1 mutant fibroblasts.

The investigators confirmed that inhibitors of HSP90 showed potent dose-dependent effects, with one in particular, AUY922, counteracting the NPC1 mutation phenotype after 48 hours at subnanomolar concentrations. This was due to the NPC1 mutant’s increased ability to exit the endoplasmic reticulum after folding — hinderance of which is the main phenotype of the disorder. This was coupled with increased ability to localize within late endosomes and lysosomes and perform its function — transport of cholesterol.

But why would chaperone inhibition increase protein folding and trafficking ability? HSP90 inhibition actually resulted in overexpression of HSP70 and HSP40, both of which were shown to play a role in counteracting NPC1 mutant phenotypes. While mouse models will provide the real litmus test, the authors state that “the promising effect of HSP90 inhibition and HSP70 over expression provides a basis for further investigations of protein chaperones in the treatment of NPC1 disease.”

The phospholipase A2s, or PLA2, superfamily catalyzes the hydrolysis of the sn-2 ester bond with an elegant simplicity that requires extreme specificity. The products of this reaction play vital downstream roles. Free arachidonic acid, for example, is the precursor in the synthesis of the proinflammatory prostaglandins and the leukotrienes. To ensure this specificity is met, expression levels and localization of each PLA2 group are finely tuned. So too is the substrate specificity.

In a recent publication in the Journal of Lipid Research, Daiki Hayashi and a team at the University of California, San Diego, describe their effort to catalog the selectivity of each PLA2 for omega-3 and omega-6 fatty acids. Using a combination of mass spectrometry and molecular dynamics simulations, the researchers presented in detail the substrate specificity for each PLA2 toward arachidonic acid and the fish oil containing omega-3 fatty acids eicosapentaenoic acid and docosahexaenoic acid. The MD simulations demonstrated this specificity to be rooted in the geometry of the hydrophobic active site, with encoded selectivity toward chain length and double-bond position.

As the authors state, “This illustrates the enormous power of a hydrophobic site cavity to show the unexpected, exquisite specificity and sensitivity generally attributed to charged and polar sites in proteins.”

Measuring the activity of lipases in a research setting often involves cumbersome multistep protocols using radiolabeled substrates and separation of substrates from products. This time-consuming process has hindered thorough investigation of inhibitors of lipases, leading to a lack of clinically approved lipase-targeting drugs with potency and specificity. This is of significant concern because lipases have relevance in numerous metabolic diseases.

In a recent paper in the Journal of Lipid Research, Sujith Rajan and colleagues at New York University Long Island School of Medicine describe how they developed a more streamlined method to determine rates of hydrolysis of triacylglycerols, or TAGs, by lipases. This was validated by testing a panel of lipase inhibitors.

The researchers incorporated a fluorescent nitrobenzoxadiazole moiety onto the TAG substrate to form an NBD-TAG substrate, which they incorporated into liposomes, thus developing a rapid, fluorescence-based assay. This was partnered with the use of Cos-7 cells for enzyme overexpression, due to their low levels of naturally occurring lipases. Finally, incorporation of the phosphatidylinositol into NBD-TAG substrate vesicles was found to greatly increase enzyme activity. This negated the cumbersome step of separating substrate from product to accurately measure activity. Combined, this presents a promising route for future lipase inhibitor discovery studies and opens such studies up to the promise of high-throughput screening.