How lipid droplets stay in shape

Lipid droplets, or LDs, are key lipid storage structures in cells. One might think that they simply result from lipid molecules separating out within the aqueous intracellular environment. However, LDs are well-organized organelles surrounded by proteins that act as gatekeepers that tightly control lipid entry and exit.

One LD-associated protein is perilipin 1, or PLIN1. Andrew Greenberg, his late mentor Constantine Londos and colleagues at the National Institute of Diabetes and Digestive and Kidney Diseases discovered PLIN1, an abundant protein in fat cells and the first protein identified on the LD surface. They reported this in a 1991 Journal of Biological Chemistry paper now recognized as a JBC Classic. 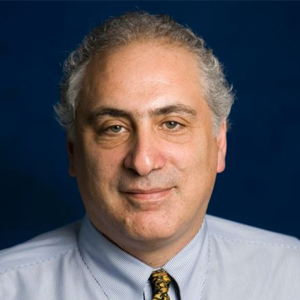 JBC technical editor Martin Spiering asked Greenberg about the discovery of PLIN1 and how it spurred further investigations into fat storage and metabolism. The conversation has been edited for length and clarity.

When we started this work, LDs had been identified, but their roles in regulating lipid metabolism were unclear. We knew little about the intracellular architecture of neutral lipid metabolism and the nature and localization of the proteins that regulate LD assembly and maintenance.

In earlier studies, LDs were found only in fatty liver and in the foam cells of atherogenic plaques. But as we studied the literature, we saw that they are present in almost all cell types. So we hypothesized that LDs serve as active centers for the storage and breakdown of neutral lipids.

These metabolic processes are critical for maintaining energy homeostasis in the body. For example, during feeding, the adipocyte stores food energy that exceeds the body’s current energy needs; during fasting, adipocytes release fatty acids into circulation.

We wanted to study these fundamental processes and identify the adipocyte proteins that regulate neutral lipid metabolism in response to fasting and feeding.

What prompted your study?

In 1990, we became interested in investigating the role of a phosphatase that dephosphorylates hormone-sensitive lipase, or HSL, and contributes to insulin actions that inhibit lipid breakdown in adipocytes. To home in on the phosphorylation/dephosphorylation mechanisms, we loaded rat adipocytes with phosphorus-32–labeled inorganic phosphate and incubated them with varying concentrations of the beta-adrenoreceptor agonist isoproterenol in the absence and presence of insulin.

We previously had seen that after cAMP-dependent protein kinase A, or PKA, activation, a major hyperphosphorylated protein migrates as a 65–67 kDa protein on SDS-PAGE. When we fractionated the phosphate-loaded adipocytes, this phosphoprotein localized exclusively to the fat cake, sparking our interest in learning more about its potential role in adipocyte metabolism. 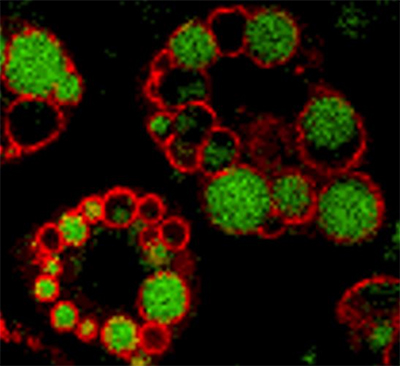 Courtesy of Andrew Greenberg
Perilipin (stained red) binds to the surface of lipid droplets (green)
and functions as a dynamic scaffolding protein that controls entry
and exit of lipids from the droplets.

More than 95% of all radiolabeled phosphate that was incorporated into cellular proteins after the PKA stimulation went into PLIN1, making it the predominant PKA substrate in adipocytes. In immunocytochemical studies in differentiated adipocytes, we saw anti-perilipin immunoreactivity in well-defined ringlike patterns around both large and small intracellular lipid droplets.

PLIN1 was the first protein we found that localized specifically to the LD surface, suggesting that it regulates triglyceride metabolism in LDs, and PLIN1 was expressed most robustly in adipocytes

What’s the main function of perilipin in LD maintenance?

PLIN1 mainly acts as a dynamic scaffold for proteins involved in the storage and hydrolysis of neutral lipids in LDs. It’s a dynamic interplay; PKA-mediated hyperphosphorylation of PLIN1 enhances lipolysis by activating adipose tissue triglyceride lipase, or ATGL, and localizes PKA-phosphorylated HSL to the LD surface.

Without PKA activation, PLIN1 binds and sequesters the LD-binding protein CGI-58. With PKA activation and ensuing PLIN1 phosphorylation, CGI-58 is released from PLIN1 and then binds to and increases the activity of ATGL.

Is PLIN1 the only LD-associated protein?

Since our 1991 paper, researchers have identified four more proteins that resemble PLIN1 in both sequence and conserved motifs. Among these, PLIN2 and PLIN3 are expressed ubiquitously. PLIN1 and PLIN2 are present exclusively on LDs, whereas PLIN3, PLIN4 and PLIN5 have been found on the LD surface, the cytoplasm and, in some cases, the nucleus.

Other proteins at the LD surface include the cell death–inducing DFFA-like effector proteins, which inhibit the hydrolysis of stored triglycerides.

What’s the main focus of current research into PLINs?

We want to understand better how PLINs are involved in regulating the activities of ATGL and autophagy that hydrolyze stored triglycerides and to delineate the functions of the PLIN isoforms.

Research has expanded into LD biogenesis, the role of phospholipids associated with the LD surface, identification and function of other proteins that associate with and traffic to LDs, and interactions of LDs with other intracellular organelles such as mitochondria.

A growing body of work is investigating how PLINs and other LD proteins may act as nutrient and lipid sensors to link changes in LD metabolism to downstream signaling pathways.

Does PLIN1 have a role in metabolic disorders such as obesity and diabetes?

In obesity, inflammation in adipose tissues is marked by elevated levels of cytokines, such as tumor necrosis factor alpha, that reduce the expression of both the PLIN1 gene and protein, resulting in increased adipocyte lipolysis and release of fatty acids into circulation. These fatty acids are taken up by the liver and can cause nonalcoholic fatty liver disease and elevate triglyceride levels.

These fatty acids also can alter insulin signaling pathways and result in insulin resistance in hepatocytes and skeletal muscle cells, which may lead to diabetes. In steatotic human livers, PLIN1 expression is increased, and PLIN1 is localized around hepatocyte lipid droplets, likely promoting triglyceride accumulation.

Have any therapeutic strategies or agents emerged that target PLIN?

One class of anti-diabetic drugs, the thiazolidinediones, bind to and activate a transcription factor that binds the PLIN1 gene promoter and increases its activity. This can increase the levels of PLIN1 mRNA and protein and block TNF-alpha’s effects on PLIN1 expression and rates of lipolysis. So, both PLIN1 and cytokines represent potential targets for ameliorating inflammation caused by fatty acid release from adipocyte LDs.

How a virus can affect memory: The role of HIV in HAND
Nicole Lynn
The fate of genes during differentiation
Brian O'Flynn
From the journals: JLR
Nivedita Uday Hegdekar
Rethinking how culture medium contributes to cellular function
Isha Dey
Flipping the switch
Courtney Chandler
From the journals: JLR
Clementine Adeyemi