ASBMB Today Science How a virus can affect memory: The role of HIV in HAND
Journal News

How a virus can affect memory: The role of HIV in HAND

Human immunodeficiency virus destroys the white blood cells of the immune system, inhibiting the body's ability to fight infection. The stages of HIV range from acute to chronic; left untreated, HIV can progress to AIDS, which can be fatal. 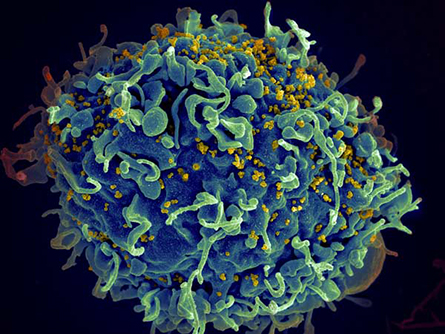 Seth Pincus, Elizabeth Fischer and Austin Athman/National Institute
of Allergy and Infectious Diseases/NIH
Helper T-cells are important in directing the immune response against HIV.
In the image shown, a helper T-cell (shown in blue) is under attack by HIV
(shown in yellow), the virus known to cause AIDS.

A frequent outcome of HIV infection is HIV-associated neurocognitive disorders, or HAND. These disorders include a spectrum of mental and physical decline that affects behavior, memory and motor functions. While the development of antiretroviral therapy, or ART, has helped reduce the progression and severity of HAND, these disorders persist in 30% to 50% of infected individuals.

The mechanisms by which HIV infection promotes neurodegeneration are largely a mystery. However, ongoing collaborative research bridging the fields of virology and lipid and cell biology have brought researchers one step closer to an answer. In a recent study published in the Journal of Biological Chemistry, Dmitri Sviridov of the Baker Heart and Diabetes Institute together with Michael Bukrinsky of George Washington University investigated the relationship between Nef, an accessory protein secreted by cells infected by HIV-1, and the onset of HAND.

Nef is released from cells as cargo within extracellular vesicles (EVs); EVs are lipid bilayer particles unencumbered by the cell membrane. Even with administration of ART, the cells of HIV-infected individuals continue to secrete EVs containing Nef called ExNef. "A discovery that Nef is secreted in EVs from infected cells even during full suppression of virus production provided an important detail to our concept," Sviridov said. 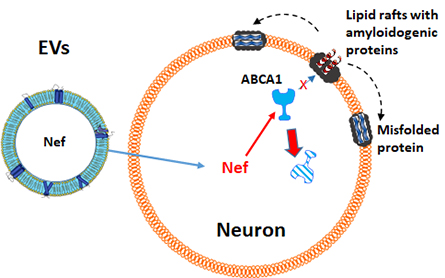 Research by Sviridov and his colleagues showed that ExNef, which is absorbed rapidly by neural cells in the lab, reduces the abundance of ATP binding cassette transporter A1, or ABCA1, a membrane protein that functions in the homeostasis and transport of cholesterol and lipids.

The researchers found that when ABCA1 is reduced, cellular cholesterol metabolism is disrupted; lipid rafts, or solid regulatory domains in the cell membrane, are modified and increase in abundance. These changes, a result of the effect of ExNef on ABCA1, promote an accumulation of amyloidogenic proteins. Specifically, the researchers observed an increase in amyloid precursor protein as well as the microtubule-associating protein tau. Both APP and tau play key roles in the pathogenesis of Alzheimer's disease.

The infective mechanism discovered in this study is unique to HIV; however, this research can further our understanding of other illnesses. "In broader terms, this mechanism involving lipid rafts … may apply to non-infectious neurodegenerative diseases, such as Alzheimer's and other pathogens, including SARS-CoV-2, which causes neurological impairment by an unknown mechanism," Sviridov said.

Sviridov and his collaborators now are investigating therapies aimed at mitigating the effects of ABCA1 downregulation and the subsequent increase in lipid raft modification and abundance as a result of ExNef. They hope therapeutic intervention not only will help mitigate the prevalence of HAND but also may work to treat other metabolic disorders.