When a pathogen finds its way inside the human body, the innate immune system springs into action, thanks to pattern-recognition receptors that pick up on molecular patterns associated with the pathogen’s genetic material and the damage that they cause. While one of these DNA sensors, cyclic GMP-AMP synthase, or cGAS, has been characterized in recent years as a key part of an immune signaling axis that upregulates the cytokine type I interferon, the role that factors including post-translational modifications play in its recruitment and activation have remained unclear.

To figure out how PTMs regulate cGAS, a laboratory at Princeton University led by Ileana Cristea has identified and functionally analyzed phosphorylations and acetylations of cGAS in various cell types. They published their findings in the journal Molecular & Cellular Proteomics.

“I am fascinated by our co-evolution with the diverse array of viral pathogens that are part of our ecosystem,” Cristea said. Her research involves the proteomics of host–virus interactions and has recently focused on understanding how proteins called DNA sensors distinguish between host DNA and viral DNA to induce immune signaling during infections with DNA viruses.

“A growing body of evidence points to post-translational modifications as modulators of DNA sensor functions,” Cristea said, “but this area of investigation is still in early stages, so we aimed to expand the understanding of the cGAS PTM landscape and of how these PTMs impact the ability of cGAS to induce immune responses and apoptosis.”

The researchers enriched cGAS by applying immunoaffinity purification to THP-1 macrophage-like cells, STING-HEK293T cells that had been immune-stimulated and human primary fibroblasts before and after the cells were infected with herpes simplex–type I virus, finding a total of six phosphorylations and eight acetylations. To assess the functional relevance of each of these PTMs, Cristea’s lab then generated a series of single-point cGAS mutations in stable cell lines constructed to express cGAS with amino acid substitutions that would either present phosphorylation and acetylation or that mimicked the modified states. 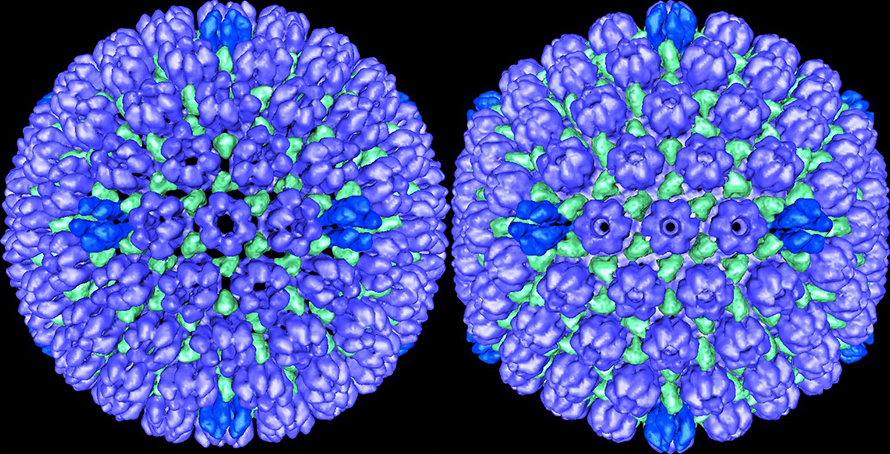 BERNARD HEYMANN /NIAMS & NIH
The image on the left is the outer protein shell of the herpes simplex virus type 1, the virus that causes cold sores. The image on the right is the mature capsid of the same virus, which Ileana Cristea and her colleagues at Princeton University have used to examine the effect of post-translational modifications on the DNA sensor cGAS.

They found that an acetyl-mimic mutation at Lys198, where lysine was swapped to glutamine, increased cGAS-dependent interferon signaling compared to a control, and they showed that two acetyl-mimic mutations at Lys384 and Lys414 can inhibit the ability of cGAS to induce apoptosis. The researchers also found, through parallel reaction–monitoring mass spectrometry, that acetylation of Lys198 decreases during infection with both HSV-1 and human cytomegalovirus, which highlights the residue as a regulatory point during virus infection.

“It was striking to find that cGAS is so richly modified,” said Bokai Song, the first author on the paper.  “Our findings add to growing evidence that PTMs on DNA sensors provide means through which host cells and viruses compete to regulate the functions of these important immune factors. Perhaps these PTMs also contribute to localization-dependent functions, but this remains to be discovered.”

Future work for the lab will involve investigating the functions and evolutionary role of different DNA sensors.

“This area of immunity has advanced significantly with the recent identification of different DNA sensors,” Cristea said. “Next we need to determine their unique and redundant functions and whether they evolved to recognize diverse pathogens in a biological state- or tissue-specific manner. This information is critical for understanding human immunity, autoimmune disorders and our ability to combat infections.”