A triglyceride link to metabolic health. The ABCs of a flippase. How bile acid alters fat absorption. Read about papers on these topics recently published in the Journal of Lipid Research.

A triglyceride link to metabolic health

The membranes of red blood cells, or RBCs, consist of a lipid bilayer that contains cholesterol and phospholipids. The phospholipid component is enriched with unsaturated fatty acids and a small amount of triglyceride, or TG. This TG expression is unexpected, because intracellular TGs generally are used for fatty acid oxidation (the process by which fatty acids are broken down to produce energy). However, because RBCs lack mitochondria, they cannot be expected to carry out fatty acid oxidation. 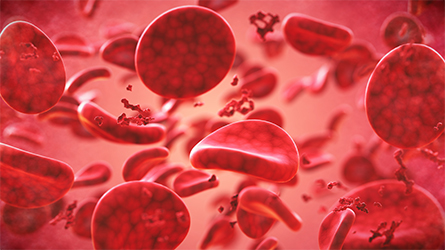 In a recent study to determine RBC-TG profiles in obese and lean people, Yilin Song and Michael Jensen at the Mayo Clinic found that obesity and lipid disorders drove increased levels of TG in the RBCs of participants. Moreover, they found that numerous free fatty acids (mostly saturated FFA) were incorporated in the RBC-TG.

To determine the source of the FFA, the researchers infused participants with a nonradioactive free fatty acid, (U-13C) palmitate. Using mass spectrometry, they found that this FFA directly incorporated itself from plasma into the RBC-TGs. This is consequential; the fatty acid composition of RBC membrane lipids affects the functional characteristics of RBCs, which in turn can predispose to diseases including a rupturing of the RBCs known as intravascular hemolysis.

The obese participants then underwent a comprehensive lifestyle intervention to lose about 10% of their body weight, following which they were reanalyzed as before. The researchers found that weight loss improved the metabolic status changes in RBC-TG fatty acid profiles. The study was documented in a paper recently published in the Journal of Lipid Research.

The ABCs of a flippase

Glucosylceramide, or GlcCer, is the precursor of most mammalian GSLs, which are synthesized by the sequential addition of monosaccharides to GlcCer in the lumen of the Golgi apparatus. Because GlcCer is synthesized on the cytoplasmic face of Golgi membranes, it must be flipped to the noncytoplasmic face by a lipid flippase to initiate GSL synthesis. Until recently, researchers did not understand this flipping mechanism.

In a recent paper in the Journal of Lipid Research, Monique Budani and researchers at the University of Toronto describe how they developed labeled probes to identify and track GlcCer flippases involved in GlcCer movement in the Golgi. They identified several transporters that could regulate GlcCer transport across the Golgi membrane, all belonging to the ATP-binding cassette, or ABC, family. The genetic knockdown of ABC transporters in various cell types yielded different effects on the overall synthesis of GSLs. This suggests the role of ABC transporters in GSL biosynthesis within the Golgi may depend on tissue and/or cell type.

These findings indicate that ABC transporters could be used to regulate GSL biosynthesis and serve as targets in diseases in which GSLs are dysregulated. Also, differential ABC flippase expression within the Golgi stack could regulate the biosynthesis of the different GSL series.

Nonalcoholic fatty liver disease, or NAFLD, is the collective term for various liver conditions affecting people who drink little to no alcohol; the main characteristic is excessive fat storage in liver cells. No cure exists, and some individuals with NAFLD can develop liver inflammation and may progress to advanced scarring, or cirrhosis, and liver failure.

A recent study found a positive correlation between plasma bile acid, or BA, levels and NAFLD severity in obese individuals. Animal models were needed for further study; however, the BA composition of mice and rats is fundamentally different from that of humans.

To address this, Rumei Li and researchers from the University of Groningen, Netherlands, generated mice that have a humanlike BA composition and lack mouse-specific muricholic acids. The researchers then carried out a series of experiments on these mice and unaltered mice, both male and female, to assess the consequences of a humanlike BA pool on obesity induced by a high-fat Western-type diet, or WTD, and NAFLD development.

The researchers found that deficiency of the enzyme Cyp2c70 in the engineered mice altered the pool of BAs and resulted in a reduction of 12-alpha-hydroxylated BA levels. This reduced the mice’s fat absorption and altered their gut microbiome composition. This deficiency thereby prevented WTD-induced obesity in female mice and NAFLD development in both genders, primarily because of impaired intestinal fat absorption. The findings, published as a paper in the Journal of Lipid Research, indicate a role for 12α-hydroxylated BAs in the control of intestinal fat absorption and gut microbiome composition.