Seung Hyun Woo, Sanjeev Ranade and Piezo2 in the sense of touch

The 2021 Nobel Prize in physiology or medicine was awarded to David Julius and Ardem Patapoutian for their discoveries of receptors that sense temperature and pressure, work that exemplifies how difficult research can be. Through hundreds of mice, tens of thousands of cells and millions of bacterial colonies, the research groups that made the winning discoveries persisted in asking important questions about the molecules behind sensation. “The Secret History of Touch” tells five stories of their persistence. Here is the fifth. 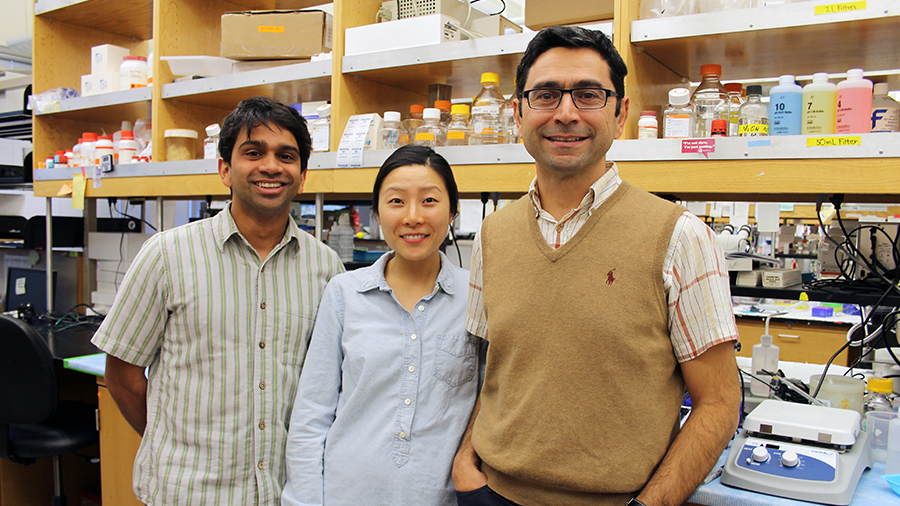 Scripps Research Institute
Ardem Patapoutian, Sanjeev Ranade and Seung Hyun Woo posed for a photo when their paper identifying piezo2 as the main mechanosensor was published in 2014.

Through a long, difficult screen using electrophysiology experiments, Bertrand Coste had identified two Piezo proteins that can make a cell sensitive to pressure. He found that they were expressed in the sensory neurons of the dorsal root ganglion, and that using RNA interference to reduce Piezo2 in those cells seemed to compromise pressure sensing.

With these results in hand, the Patapoutian lab was curious about how the two proteins worked together in the complex environment of a whole mouse.

Seung Hyun Woo, a postdoc in the lab, investigated the expression of Piezo1 in the most common skin cell. “Piezo1 is in keratinocytes. It’s a huge population, and piezo1 was highly enriched,” she said. “So we all thought, ‘OK, it’s piezo1 that’s doing the touch sensing, along with piezo2 in neurons.’”

But a control experiment that she ran to save time showed that that hypothesis might be incorrect. Woo lived halfway between San Diego and Los Angeles and commuted a punishing 85 miles to the lab. “I think that’s why I was so successful,” she said. “I really had to get stuff done in time so that I could go back home. So I really managed my time efficiently.”

Woo had earned her Ph.D. in a dermatology lab, studying touch-sensitive Merkel cells, which are scattered in small numbers through the deepest layer of the skin. She knew that Merkel cells, which are shaped like little balloons, make connections with sensory neurons, so she was curious about their Piezo1 expression. But for efficiency’s sake, she checked both Piezo1 and Piezo2 at the same time — and found that Merkel cells expressed an enormous amount of Piezo2.

“Because we were so focused on piezo1, we didn’t really think about piezo2 being in the skin cells,” she said. “We were all blown away.”

The observation led the lab to focus on the role of Piezo2 in pressure sensing. The trouble was that it proved to be very difficult to remove the protein from mice.

Sanjeev Ranade had begun to work on the newly discovered Piezo channels because his first project, investigating crosstalk between TRP receptors, hadn’t panned out. He had tried to breed genetically complex mice that expressed some TRPs but not others in certain tissues, and he had run into numerous challenges.

“I basically was rounding out my fifth year (of graduate school), around Christmas time, and I looked up and realized that I had no real viable path to a thesis,” Ranade said. “But I had gained all of this experience and knowledge of the pitfalls with making transgenic mouse lines ... and that made me ideally positioned to generate the constitutive and conditional knockout mouse models for piezo1 and 2.”

Generating both mice — especially the Piezo2 knockout — took further years of effort. Complete removal of the gene kills mice as embryos. Mice lacking Piezo2 only in their sensory neurons die soon after birth. And removing the gene from only certain tissues in adults was challenging for the same technical reasons that removing TRPs had been. Eventually, Ranade said, it was time to finish and move on. But he hated to leave without finding out how a mouse lacking Piezo2 in its sensory neurons would behave. As he wrote up his thesis, he tried one more strategy to breed a drug-inducible knockout. “That was my last shot.”

He remembers clearly checking the day after his thesis defense to see how a group of mice was faring. “I defended on a Thursday,” he said. “The next morning, I came into lab, and I went upstairs from the vivarium to tell Ardem, ‘Hey. I think we got something.’”

Patapoutian went down to the mouse facility with Ranade and another postdoc, Stuart Cahalan, to see for himself. There were four mice in the cage; Ranade had induced Piezo2 knockout in sensory neurons in just two. “I asked them to tell me which ones they thought were the test. And Stuart just laughed and said, ‘that one and that one.’”

Cahalan had guessed right. Mice without Piezo2 in their sensory neurons walk with an odd, shambling gait. Later, Woo would show that they are unable to feel the position of their limbs.

Courtesy of Sanjeev Ranade
A wild-type lab mouse will feel a piece of lab tape stuck to its back, and will make an effort to remove the tape. A mouse with Piezo2 knocked out in its sensory neurons and Merkel cells will continue exploring its environment as if there were no tape there at all.

“There were so many technical challenges, and so many things that went wrong, that actually getting the mouse felt like climbing a huge mountain,” Ranade said. “But then, once you have the mouse, it’s simply a tool; you still have to do the actual scientific experiment. So you climb one mountain, you look up, and you realize there’s an even bigger one.”

Using mice lacking Piezo2 in both Merkel cells and neurons, the lab found that the animals had no problem detecting noxious heat or jabbing touch. But they failed to feel gentle stimuli like the soft swipe of a cotton swab over a paw or a piece of lab tape applied to a furry back. An ordinary mouse will make an effort to remove a piece of tape; the knockout mice, Ranade and technician Matt Petrus showed, blithely continue to explore their enclosure, paying it no attention. At one conference, Ranade said, “I presented these results and some of the trainees jokingly referred to it as the ‘kick-me’ mouse.”

After following up on the accidental observation, the lab concluded that Piezo2 in sensory neurons and Merkel cells is the main protein in control of a mouse’s sense of innocuous touch.

Epilogue: The other side of the rainbow

The work behind this year’s Nobel Prize was slow and difficult, demanding a lot of the researchers at the bench — including many whose names do not appear in this story. According to Rosen, now an effects artist at the animation studio DreamWorks, seeing those discoveries recognized has been deeply gratifying.

“I burned the candle for a long time on both ends,” Rosen said. “I did a lot of work — and it matters, you know? Twenty-five years later, it comes back.”

Meanwhile, the long, slow slog continues. There are still plenty of questions about how thermo- and mechanosensation work. The stimuli that activate several TRP channels remain controversial. While high-resolution structures of TRPV1 show in great detail how the channel opens when ions or ligands bind, it remains a mystery just how a specific temperature can open the channel so acutely. The structures of Piezo channels also have been published, but according to Coste, researchers still are hunting for the genes that govern residual pressure-activated currents in cells that lack Piezo1 and 2. Elsewhere, neuroscientists are trying to find out what it means when a neuron expresses both heat- and cold-sensitive TRP channels.

Thinking back on mentoring his students through tough patches, Julius said, “I have a few things like that now in my lab, where people are trying to get through to the other side of the rainbow.”