Researchers in Julius’ and Patapoutian’s labs who made key discoveries at the bench worked through many technical problems and disappointments in pursuit of the molecules behind sensation. “The Secret History of Touch” tells five stories of their persistence. Here is the fourth.

COURTESY OF THE NOBEL FOUNDATION
A schematic shows how Bertrand Coste used patch-clamp electrophysiology to discover piezo1, applying a mechanical force to a cell while also measuring current (top line). Later experiments showed that the protein is a channel that opens in response to mechanical forces against a nearby membrane.

In the mid-2000s, Ardem Patapoutian, known for his studies of temperature sensitive ion channels called TRPs, wanted to transition into studying mechanotransduction.

Patapoutian did not have time for an interview for this story, but in an email, he wrote, “After studying temperature sensation for 10 years, it was a natural transition to ask how mechanical force is sensed.”

Like the search for the cold receptor, it was another risky question, fraught with the possibility of failure. Sanjeev Ranade, who joined Patapoutian’s lab as a graduate student to study thermosensation, said, “Many labs had been looking for the identity of the gene or genes that allow us to sense touch. Many labs were not successful in finding these genes.” 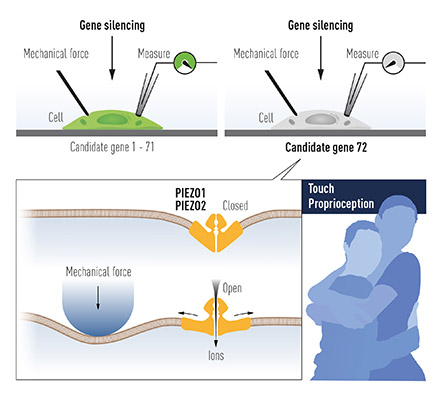 Courtesy of the Nobel Foundation
A schematic shows how Bertrand Coste used patch-clamp electrophysiology to discover piezo1, applying a mechanical force to a cell while also measuring current (top line). Later experiments showed that the protein is a channel that opens in response to mechanical forces against a nearby membrane.

So when physiologist Bertrand Coste joined the lab as a postdoc to search for the protein that lets human neurons sense pressure, Ranade said, “It was one of those almost ‘I can’t believe you’re doing this’ kind of projects.”

Like Makoto Tominaga in David Julius’ lab, Coste was an experienced electrophysiologist who came to a new lab in California with a reputation for receptor hunting and immediately began to build a new electrophysiology rig. He had studied mechanosensory neurons as a graduate student and was skilled at recording from a neuron with an electrode while gently prodding it with a tiny glass probe — a technique that few others in the world used.

“Recording these mechanically activated currents naturally pushed me to the question of what are the ion channels that are involved in this activity,” Coste said. Patapoutian’s lab, which lately had cloned TRPA1 and TRPM8, struck him as the ideal environment to try to answer the question.

Coste initially planned to sift through the DRG to find neurons that respond to mechanostimulation and then extract their RNA and screen for the genes governing pressure sensation. But pilot experiments made it clear that the strategy was impractical. So he took a different approach: He tested as many cell lines as he could lay hands on, looking for one that would respond to pressure by depolarizing. “With immortalized cell lines you have endless materials,” he said. “It’s easy to use, and every cell is a clone of the other cells.” 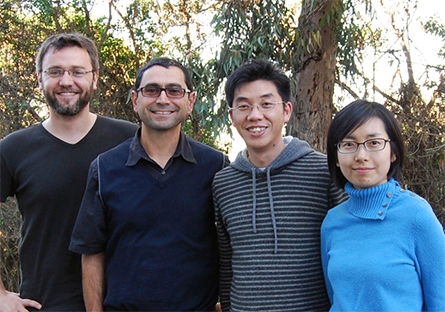 Scripps Research Institute
From left, Bertrand Coste, Ardem Patapoutian, Bailong Xiao and Seung Eun Kim when Coste and Xiao’s paper and Kim’s paper were published together in Nature in 2012.

Coste found a neuroblastoma line that fit the bill and winnowed down its list of highly expressed genes to the most interesting candidates: transmembrane proteins with unknown function that shared some characteristics with ion channels.

That left a list of dozens of genes. Coste began to use siRNA to knock them down one at a time and then prodded the altered cells, watching for one that would fail to respond to mechanical stimulation. Electrophysiology is highly reliable but also very slow. He averaged about two candidate genes a week, and, for a year or more, every single candidate he tested had no effect on the cells’ response. Not making progress can be tough. A few months in, after many trials and no success, Coste said, “My mood was declining very fast.”

“We are scientists. We like to think, to problem solve,” he said. While planning the screen and working around the technical issues, he’d had a chance to solve problems. “But the screen itself was very repetitive.” Coste brought the problem to Patapoutian, explaining that even though he was excited about the possible results of the project, the mindless grind of doing the same experiment over and over again and getting no result was difficult. Patapoutian, according to Coste, was understanding; he assigned a technician to help and suggested a second, more tractable project he could work at on the side. “I was relieved of doing every day the same thing, every day having negative results,” Coste said. 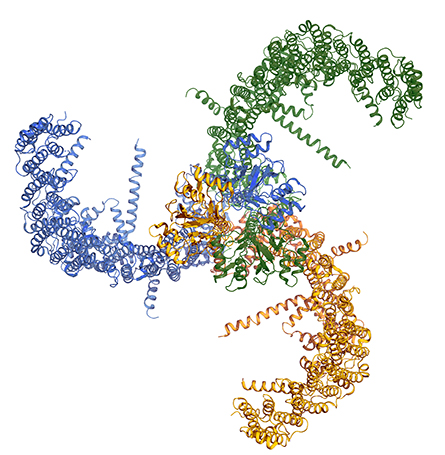 Scripps Research Institute
A structure of the piezo channel

Finally, after ruling out 72 candidate genes, Coste found an siRNA that blunted the cell’s response to mechanical stimulation. Ranade said, “They could have easily quit at 72, and said, ‘OK, it’s been a year, we have nothing.’ And yet, they found it at 73.”

The gene was mysterious, but it was large, with an estimated 24 to 36 transmembrane domains. Besides controlling the neuroblastoma cells’ mechanical response, when cloned into mechanically inert cells, it made them sensitive. The team dubbed it Piezo, after the Greek word for pressure, and soon found that mice have two closely related Piezo proteins.

Coste said characterizing the channel was exhilarating: “After one year of screening … every experiment you do is telling you something interesting on the activity of this channel.”

Coste and many colleagues in the Patapoutian lab would go on to show that Piezo1 and Piezo2 play integral roles in mammals’ sense of touch and many other physiological functions. Even before that, Ranade said, it was clear that the finding was important. “Every single one of us in the lab, when Bertrand found Piezos, we all kind of knew … that he struck gold.”

Although the study investigated one-time failure to guess an insignificant piece of information rather than the longer and more fraught process of research, Fishbach said that its conclusions reflect her own experience as a researcher and mentor.

“There are two categories of problems with learning from failure,” she said. Cognitively, it can be harder to learn from the unexpected than the expected and more difficult to seek out the reasons that a hypothesis missed the mark than to accept that it was correct. “Getting people to pay attention to what didn’t work is notoriously hard,” she said.

The second category is emotional. It is easier to ignore a failure than to engage with it. And sometimes people — especially those with relatively little expertise in a field — learn the wrong lesson from failure, concluding that they are unable to execute the task at hand. What’s more, Fishbach said, “Doing something with no sense of progress is psychologically hard. You can tell yourself that one day it will pay off, but it’s not today or yesterday or tomorrow. And people give up.”

Much like David Julius, Fischbach said that social support, encouraging words and help with troubleshooting from others can help keep people motivated. But, Julius pointed out, “It’s not just me. They have to have their own gyroscope.” He added that there are times when he has doubted the future of a project and has gotten inspiration from persistent trainees.