Only a fraction of scientists’ work at the bench makes it into published papers. Often, the bulk of a researcher’s efforts is fruitless, producing months’ or years’ worth of negative data that don’t provide new insights, data that answer the motivating question with “We still don’t know.” Against that backdrop, it is remarkable when a discovery actually materializes.

“A lot of what we do is not success. It’s failure,” Julius said on the day the prize was announced. “I think there’s two things that have to keep you going. One is just persistence … and the other is that you have to get enjoyment out of what you do every day.”

The scientists in Julius’ and Patapoutian’s labs who made key discoveries at the bench worked through many technical problems and disappointments in pursuit of the molecules behind sensation. “The Secret History of Touch” tells five stories of their persistence. Here is the first.

Most human senses — sight, scent, taste — involve receptors for a chemical ligand. Temperature sensing involves a response to ambient conditions, with no ligand to be found.

In the 1990s, David Julius unexpectedly found a way in while trying to understand a molecule that was interesting because it was irritating. Julius and his trainees studied capsaicin, a compound from hot peppers, because it caused a sensation of pain. Julius said, “The connection to heat wasn’t something that we had preemptively figured out.” 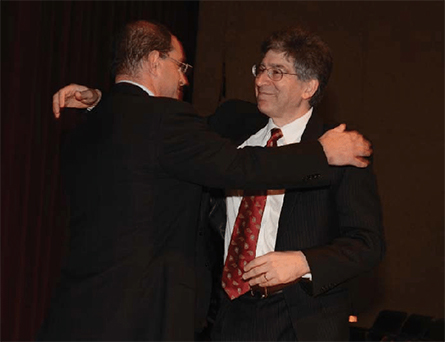 Reprinted under a creative commons license from the journal Temperature
Michael Caterina (right), now a professor at Johns Hopkins, with David Julius during a 2014 award ceremony.

Michael Caterina, who conducted many of the key experiments as a postdoc, initially had laid the groundwork to look for a different receptor altogether; Julius had a reputation for discovering new receptors. Caterina had joined the lab hoping to find the protein that recognizes the neurotransmitter gamma aminobutyric acid, better known as GABA. But after he had worked on the project for some time, someone else published the receptor’s identity.

“It was devastating,” Caterina said. “You open up Nature and see this full article on this beautiful experiment. But the kicker was that because of a peculiarity in the way the GABA-B receptor functions … we never would have gotten it with that assay that we were using.”

Still, the assay had to be useful for something.

Being scooped left Caterina with a toolkit for hunting receptors: a fluorescence assay that could detect a cellular calcium influx and a library of millions of genes expressed in the brain.

“The last sensory system to fall”

Why did it take so long to uncover the molecular mechanisms of touch sensing?

There’s an anecdote about Julius and a moment of inspiration in the hot sauce aisle that has taken on a life of its own. He didn’t decide to hunt for the capsaicin receptor while picking up the week’s groceries, he said at a press conference — although he said a trip to a supermarket did prod him to think, “‘We really have to get this project done.’”

Physiologists had shown that capsaicin could activate pain-sensing neurons in the dorsal root ganglion, or DRG, a relay station for sensory signals on their way from the skin to the brain. DRG neurons are heterogeneous. Some respond to pressure, some to cold, some to heat and some to chemical irritants — such as capsaicin. It stood to reason that there must be a receptor. Could the team use its tools to find it?

“This idea about the capsaicin receptor had been floating around in our lab for a long time, and people had sort of taken stabs at it, but no one had really done it seriously,” Julius told ASBMB Today. “Realizing that Mike needed something and that he was incredibly capable, I said, ‘Why don’t you do this?’”

It was a risky project. As the GABA receptor just had shown, Caterina’s approach only could find single-protein receptors. If capsaicin bound to a complex of two or more proteins, he would fail. Additionally, plenty of other labs had failed to identify a capsaicin receptor, to the point that some argued that perhaps it wasn’t sensed by a protein at all. “All the obvious things had been tried,” said Toby Rosen, then an undergraduate in the lab.

Despite the risks, Caterina decided to take on the project. With help from research scientist Tony Brake, he generated a new coding library with millions of transcripts from DRG neurons and set up a screen for a capsaicin-binding receptor. He transfected pooled subsets of the library into cells loaded with a fluorescent calcium sensor and then added capsaicin, watching for a response. 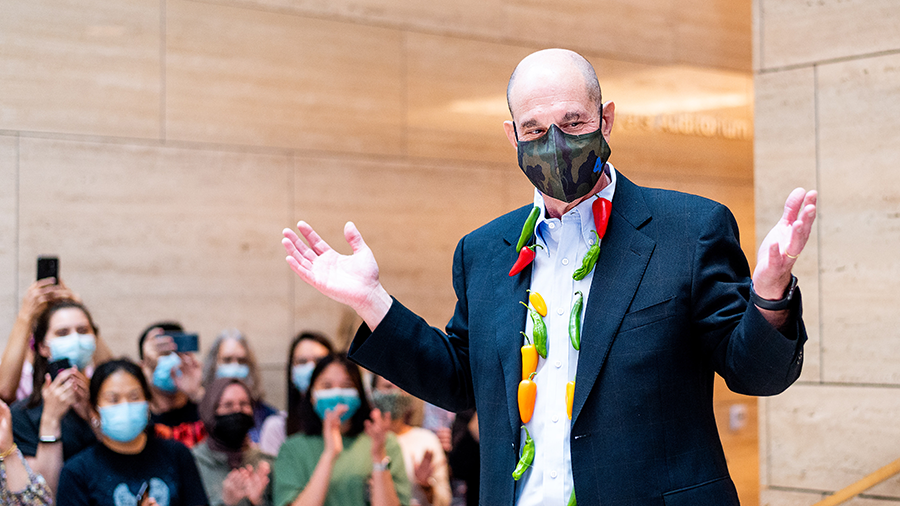 Noah Berger/UCSF
Julius spoke to colleagues in a garland made of hot peppers while celebrating his Nobel Prize in October 2021.

Everyone from the Julius lab who spoke to ASBMB Today for this story remembers that the 11th pool Caterina tested showed the first flicker of fluorescence. Most volunteered its name: pool DRG-11. Given that there were 120 pools, this was statistically pretty fortunate. Still, the pool included 16,000 genes, any of which might be the receptor. Caterina subdivided and subdivided again, using bacteria to amplify increasingly narrow subsets of the library. Julius got involved too, helping to pick bacterial colonies on at least one occasion.

“He was just cranking — incredible hours during that period,” Rosen said of Caterina. “I want to say 18 to 20 hours a day. It was breathtaking.”

With every subdivision, more cells fluoresced in response to capsaicin. “Mike came in one day with this incredible picture: really massively responding HEK293 cells, which looked like a nuclear explosion,” Rosen said. “And the controls were just totally untouched.”

In just three weeks of long days, Caterina had narrowed the response down to a single gene.

“You spend so much time in research with projects that take a long time and that move slowly,” Caterina said, looking back. “When you have these windows of time when things are actually moving more processively, it’s really a special thing.”

On the day he received the Nobel Prize, Julius recalled this experiment as one of the most beautiful he’d ever been involved in.

The receptor, dubbed transient receptor potential vanilloid 1, or TRPV1 for short, was an ion channel. The team suspected that its response to capsaicin was a side effect and that the protein might have evolved to recognize some stimulus more relevant to cells. What was the receptor really there for? 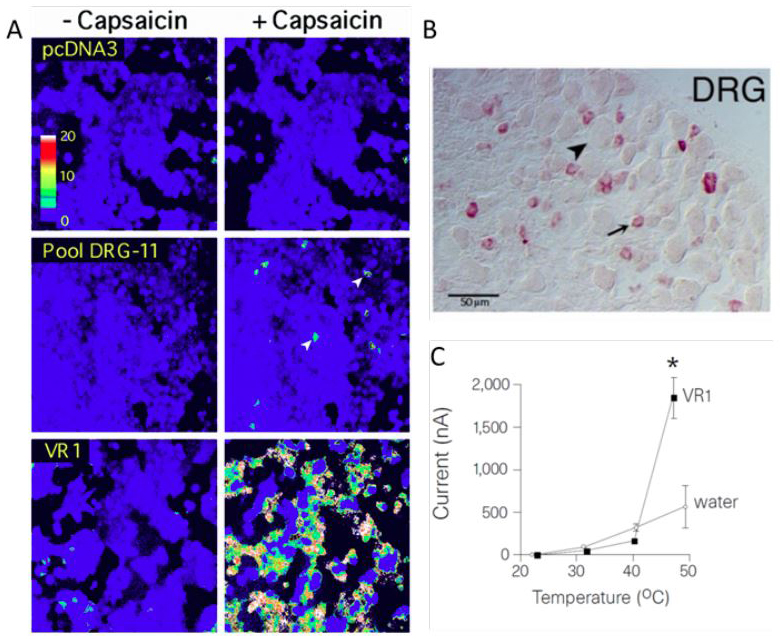 COURTESY OF THE NOBEL FOUNDATION
A figure from the 1997 paper that described TRPV1 shows (panel A) the gradual appearance of cells that responded to capsaicin as the lab narrowed
down the TRP channel’s identity; (panel B) the presence of TRPV1-expressing cell bodies in the dorsal root ganglion; and (C) the impact
of TRP expression in an oocyte on current across its membrane as temperature increased.

The last sensory system to fall

At a press conference, a journalist asked David Julius why it had taken so long for the Nobel committee to award a prize based on the neurobiology of touch. After all, they had years before honored discoveries in other sensory organs including how the eye recognizes light; how olfactory receptors match specific odorants; and how G protein–coupled receptors, including those that recognize bitter and sweet tastes, activate cell signaling.

“This has sort of been the last main sensory system to fall to molecular analysis,” Julius agreed.

He cited two reasons. One is that, unlike sight, taste and olfaction, the sense of touch is distributed widely across the surface of the body and inside it, making it hard to isolate a cell population involved in sensation. The second is that the signal isn’t a specific chemical ligand that can be added to a cell culture or crystallized as part of a complex. In contrast, the cues that these particular neurons sense are insubstantial; there is no ligand linked to feelings of pressure or temperature. That was what made the existence of molecules that feel hot and cool so useful to Julius’ studies.