Researchers in Julius’ and Patapoutian’s labs who made key discoveries at the bench worked through many technical problems and disappointments in pursuit of the molecules behind sensation. “The Secret History of Touch” tells five stories of their persistence. Here is the third. 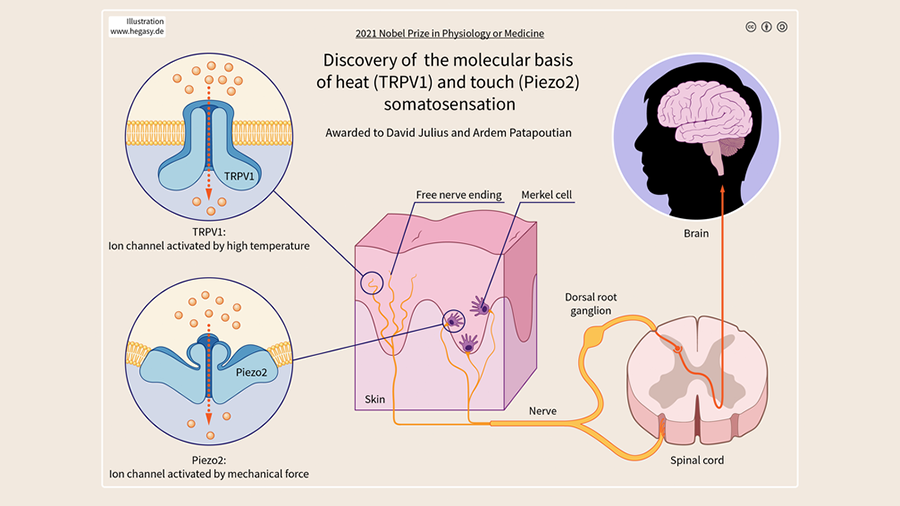 A schematic from the Nobel committee illustrates the anatomy of heat and touch sensation. TRPV1 is expressed in heat-sensitive neurons, and Piezo2 in pressure-sensitive Merkel cells that synapse with neurons. Both types of neuron transmit signals from the skin through the dorsal root ganglion, or DRG, to the spinal cord. From there, the sensory signals are passed on to the brain.

Research in David Julius’ lab found that capsaicin, a molecule the body registers as hot, was sensed by a protein that also responds to high temperatures. It followed that a compound that feels cool, such as menthol, a molecule from mint, might bind to a cold-sensing protein.

When David Julius asked postdoc David McKemy whether he would be interested in taking on a hunt for the menthol receptor, even though he knew it would be competitive, McKemy was game. “It was a risky project, but that’s what had been successful in the Julius lab,” he explained. 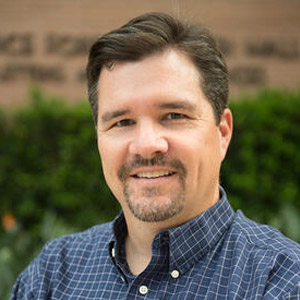 Conceptually, McKemy’s project was very similar to what Michael Caterina had done a few years prior. He planned to express in a cultured cell line a library of genes that he knew were expressed in neurons that innervate the skin, and use a fluorescent calcium sensor to pick out the cells that responded to menthol. He hoped that by zeroing in on the genes expressed in the sensitive cells, he would find the gene that governed a response to menthol.

However, based on intuitions from years of thinking about molecules, McKemy said, “Everyone really thought that cold was inhibiting things. Cold wasn’t going to actually activate something.”

And at first, it seemed as if everyone might be right. After months of screening in an expression library from dorsal root ganglion or DRG neurons, which innervate most of the skin, he did not locate the menthol receptor.

“I remember Dave McKemy picking colonies and then getting frustrated,” Julius recalled. “I said, ‘OK, let’s get your pools out of the autoclave bag … and let’s go back and pick another 5,000 colonies.’ This is the nature of doing bench work. We all go through those periods when stuff’s not working, and that’s when you have to work hardest, I guess.”

Julius said he helps trainees cope with the long slog through a combination of reminding them why the work was worth doing in the first place and finding practical ways to get past the failed experiments (see “Motivation to persist”). 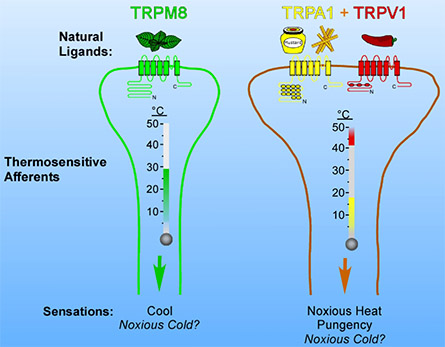 David McKemy/Wikimedia
A figure that Dave McKemy published in 2005 shows how the channel TRPM8, which he discovered, recognizes cool temperatures and menthol (left). It also shows a single neuron expressing two TRP channels with different sensitivities, raising questions about how the brain interprets a signal from such a cell.

In McKemy’s case, that different approach was to use a new set of neurons. Neurons from the DRG respond to heterogeneous stimuli. There are many fewer that fire in response to menthol than to capsaicin. So McKemy looked instead at genes expressed in a more cold-sensitive group of neurons, those that innervate the head, which are called trigeminal. McKemy made another cDNA library and started again. In that library, at last, he found an ion channel that responded to menthol — and also cold.

“That paper was, I think, two and a half years of research,” McKemy said. “And I think over two years of that is two sentences in the paper.”

By the time he found the menthol receptor, McKemy knew that he had to work fast: Others were searching for it too. Caterina, who had discovered the TRPV1 receptor and who by this time had started his own laboratory, said, “There is such a thing as that window of time when the next question is just sitting there and waiting to be asked. … It can be a bit of a race.”

Caterina’s group was part of the race for the menthol receptor. So was Ardem Patapoutian’s lab, which published just a day after McKemy’s paper came out, identifying the same receptor with an opposite approach. Instead of screening for a ligand-binding activity and then sequencing the protein responsible for it, they used bioinformatics techniques to search out new TRP channels and then investigated what those proteins might detect.

McKemy said, “The fact that both labs found the same thing using two independent methods? You’re pretty confident everything is right when that happens.

“This is a field of a lot of failure. There are the things that work out, and when they work, it’s great. But there’s a lot of things that go into getting there, the controls and so forth, before you actually get to the big result.”

Laureates were once trainees themselves. When David Julius was a second-year graduate student at the University of California, Berkeley, his first mentor left the university, shutting down her lab.

“That’s how I first initially met him; he was an escapee and desperate, a waif and a stray, looking for a congenial home,” Jeremy Thorner, an emeritus professor at Berkeley and Julius’ co-mentor, recalled drolly. “It was to my very great advantage that he decided that I was someone he could work with and learn from.”

Co-mentored by Thorner and fellow Berkeley professor Randy Schekman, working on how haploid yeast can have and communicate a mating type, Julius identified a protease involved in yeast hormone maturation that proved to have homologs in human cells that regulate the production of insulin and other hormones.

“I was very fortunate actually, in the end, that that whole thing happened,” Julius said. He recalls himself as naive and then lucky; the collaboration, put together for administrative reasons, turned out to give him excellent guidance for the project he wanted to work on.

In Thorner’s lab, Julius also met Tony Brake, a postdoc who took a job in industry but later returned to academia as a research scientist in Julius’ lab.

“A lot of the early cloning work from David’s lab came from putting the band back together,” Thorner said. As a mentor, he added, “It’s all very satisfying.”