Legionnaires’ disease is a severe pneumonia caused by breathing or swallowing water containing the bacterial pathogen Legionella pneumophila, which has a biphasic life cycle — a replicative phase when the bacteria are nonvirulent and a transmissive phase when they are virulent.

Researchers at the Run Ze Laboratory for Gastrointestinal Microbiome Study at Sun Yat-sen University in Guangzhou, China, have discovered that the biphasic life cycle depends on regulation of protein homeostasis by caseinolytic protease–dependent proteolysis. In their paper published in the journal Molecular & Cellular Proteomics, Zhenhuang Ge and co-authors describe how this ClpP-dependent proteolysis directly or indirectly plays a regulatory role in cellular events in L. pneumophila. 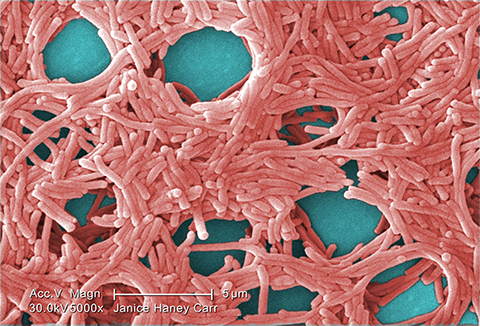 Ge described the team’s previous results on the physiology and pathogenesis of the ClpP protease homologue in L. pneumophila: “We found that ClpP is required for the transmission traits and cell division (and) impairs the virulence of L. pneumophila and the optimal translocation of effector proteins.”

This study continued that research, investigating the profiles of global protein abundance during replicative-to-transmissive phase transitions. During the virulence phase, approximately 330 effector proteins are translocated into host cells, triggering direct manipulation of host cell signaling pathways. However, this translocation is not simultaneous, which hints at a temporal control mechanism for the effector proteins. Ge’s team found similar temporal control mechanisms in proteomic experiments where some proteins were synthesized only during the replicative phase and not the transmissive phase.

These controls have allowed L. pneumophila to adapt to face many environments, both natural and human-made. The bacteria colonize water from 0 C to 60 C and in the pH range of 5.5 to 9.2. It can be found in water systems such as showerheads and faucets and even windshield fluid tanks of vehicles.

“(L. pneumophila) do the right things at the right time to complete the biological cycle; otherwise the disruption will have devastating consequences,” Ge explained, comparing the bacteria’s pattern to a human’s daily habits. “In the alternation of day and night, we rest at night and work during the day to ensure a healthy and long-lasting life.”

The ClpP-dependent proteolysis study directly compared protein abundances during the replicative and transmissive phases. During the replicative phase, the proteins associated with ribosome, amino sugar, nucleotide sugar and biotin metabolism pathways were enriched most significantly. These are all pathways associated with replication and growth. In contrast, during the transmissive phase, flagellar assembly proteins, signal transduction proteins, and proteins associated with microbial metabolic pathways such as propanoate and ketone body metabolism were more enriched.

When L. pneumophila cells lacked ClpP, the metabolic pathways of both the replicative and transmissive phases were disordered. The signaling alarmone ppGpp is a trigger for L. pneumophila differentiation. The expression of SpoT, an enzyme that controls the accumulation of ppGpp in response to fatty acid depletion, almost completely restored the life cycle transition of L. pneumophila, but virulence never was recovered. This demonstrated that bacterial virulence requires ClpP regulation of the effector proteins and secretion system.

“The bacterial protease ClpP, an untapped antimicrobial drug target, and the fatty acid metabolism pathway would be suitable for targeting by antibacterial drugs,” Ge concluded.