In the time it takes for an Amazon Prime delivery to arrive, cells damaged by chemotherapy can fix their most important DNA almost completely. That’s true in mouse livers mice at least, according to a new study. 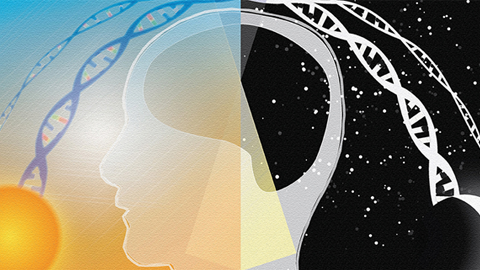 Researchers found that DNA damaged by the chemotherapy drug cisplatin is mostly good as new in noncancerous tissue within two circadian cycles, or two days. The results, published in the Journal of Biological Chemistry, could inform strategies for administering chemotherapy at times that maximize tumor damage while minimizing side effects.

Side effects of cisplatin include kidney, liver and peripheral nerve injury. Cisplatin kills cells, cancerous or not, by damaging their DNA, so Nobel laureate Aziz Sancar and his team aimed to uncover the pattern of DNA repair in healthy cells. In normal cells, the circadian clock drives the rhythm of DNA repair, but not in tumors.

“Most cancers do not have a functional clock and so, basically any time that it’s good for the normal tissue, you can hit the cancer,” said Sancar, a professor at the University of North Carolina School of Medicine.

They found that for some genes, transcription — during which damaged DNA is recognized and patched up — was controlled by the circadian clock. The pattern was specific to each gene, with repair peaking at different times of day. For the remaining DNA that is not transcribed or expressed, repair was less efficient but also clock-controlled, and maximum repair occurred between 4 p.m. and 6 p.m., Sancar said.

In this previous experiment, they examined DNA two hours after injecting cisplatin, but in their new work in JBC, Sancar’s team wanted to study recovery on a more clinically relevant time scale.

Patients get cisplatin intravenously at weekly, 10-day or two week intervals, allowing recovery time between doses, Sancar explained. “And so we wanted to know what happens over those long periods.”

Using a technique developed in their lab, the team captured and sequenced fragments of damaged DNA from mice injected with cisplatin. Over 70 days, they produced maps displaying where and when DNA was fixed at the resolution of a single nucleotide.

The DNA of transcribed genes was just about fully mended in two circadian cycles, Sancar said. Most repair in the first 48 hours was to these genes.

The remaining damage in nontranscribed DNA is not harmful in normal cells that aren’t replicating, Sancar said. But for cancer cells, which divide uncontrollably, this damage could lead to cell death.

Before this information is considered in the clinic, further experiments are needed, Sancar said.

Sancar is working with oncologists, evaluating new cisplatin regimens in mice implanted with human tumors to find a treatment that reduces toxicity in normal tissue while hitting cancer hard.