Cytotoxic T cells exist to kill cells subverted by infection or mutation. That makes them the focus of a lot of immuno-oncology research. Although cancers must slip past immune recognition to become established in the first place, immunotherapies such as checkpoint inhibitor antibodies or T cells with modified receptors can retrain the immune system to focus on cancer cells.

So far, this has worked best for blood cancers with many cells spread throughout the body. Solid tumors have been harder to treat. The inside of a tumor differs from normal tissue in complex ways that add up to make it a very immunosuppressive environment.

In a preliminary study published in Molecular & Cellular Proteomics, postdoc James Byrnes and colleagues in Jim Wells’ lab at the University of California, San Francisco, report on their research into how the proteins on the surface of a cytotoxic T cell respond to various stimuli they might encounter in a tumor.

Using primary cells removed from human blood, the team focused on the surface proteome of cytotoxic CD8+ T cells. They investigated how interactions with T regulatory cells, which dampen T cells’ response and help end an immune reaction, and oxygen limitation, a feature of many tumors, changed the cytotoxic T cell surface. 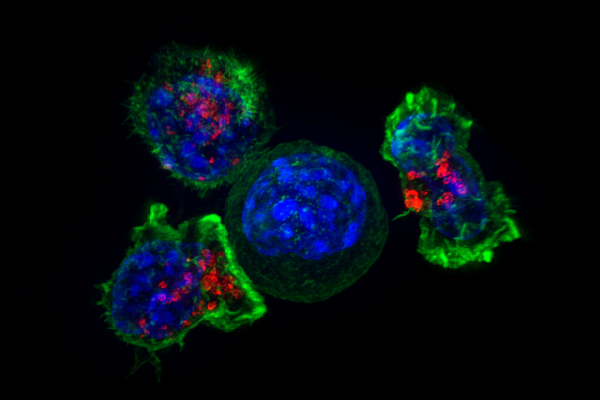 National Institutes of Health
A group of killer T cells (green and red) surround a cancer cell (blue, center). When a killer T cell makes contact
with a target cell, the killer cell attaches and spreads over the target, then uses special chemicals housed
in vesicles(red) to deliver the killing blow. The killer T cells then move on to find the next target.

T regulatory cells are abundant in some solid tumors, and the team expected them to have dramatic effects. They were surprised to find that hypoxia had a much greater effect.

“The prevailing thought is that T regulatory cells are this super-potent immunosuppressive factor,” Byrnes said. But growing CD8+ T cells with T regulatory cells changed only a targeted subset of proteins, mostly the ones that increase in abundance after activation and are involved in signaling and proliferation.

“The T-regs are reversing the activation phenotype,” Byrnes said. “Hypoxia is a little more of a sledgehammer.”

Oxygen starvation shifted cytotoxic T cell expression of many surface proteins: The cells reduced immune signaling receptors and increased metabolic proteins, apparently in an effort to survive using glycolysis. Other studies have shown that hypoxia can make T cells more prone to kill but also slower to multiply; on balance, they may become less effective.

The Wells lab is focused primarily on antibody engineering, Byrnes said, and these results have given them interesting leads to follow as they consider new ways to mobilize the immune cells within a tumor. “We’re hoping … (to) gain biological insight into what some of these proteins are doing, as well as identify handles that we can use to therapeutically engage hypoxic T cells.”