What if you could save a memory forever? What would you want it to be? A family picture, a favorite vacation spot, an art performance or a message to future generations?

What about the face of a groundbreaking scientist whose work largely was overlooked in her lifetime?

For the #MemoriesInDNA project, researchers at the Molecular Information Systems Lab, or MISL, at the University of Washington and Microsoft crowdsourced 10,000 images representing treasured memories and stored them indefinitely in synthetic DNA manufactured by Twist Bioscience.

#MemoriesInDNA turned what seems like science fiction into reality. But then the researchers took the project a step farther. They collaborated with Seattle-based artist Kate Thompson to create a portrait of an often overlooked star of DNA discovery, Rosalind Franklin, using the synthetic DNA encoding the memories mixed with acrylic paint.

Luis Ceze, professor in the UW's Paul G. Allen School of Computer Science and Engineering, explained in a news release: "We had this massive collection of image files signifying what people want to preserve for posterity, and this new storage method. So, we thought, why not use them to demonstrate the science we've been working on while paying tribute to the scientist who started it all?" 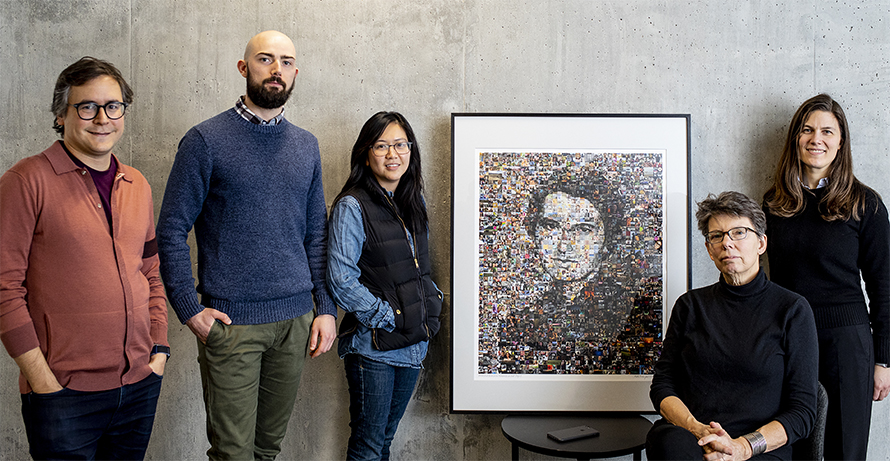 DENNIS WISE/UNIVERSITY OF WASHINGTON
Members of the #MemoriesInDNA project posing with their portrait of Rosalind Franklin are, from left, Luis Ceze, David Ward, Bichlien Nguyen, Kate Thompson and Karin Strauss. Not pictured are Xiaomeng Liu and Jeff Nivala.

How does digital data storage in DNA work?

Digital data is binary, composed of 0s and 1s. DNA stores genetic information in cells, but rather than being binary, it operates on a four-letter code (A, C, G and T). Computers and DNA speak two different languages, so the researchers needed to develop a translator.

First, the digital data was converted, or encoded, to the A, C, G and T of DNA. Then, the researchers needed to write the DNA one base at a time to store the data.

"This is where Twist Bioscience plays an important role — we write the DNA base by base, like building a Lego tower," said Angela Bitting, Twist's senior vice president of corporate affairs.

To retrieve the data, the researchers take the DNA out of its storage container and sequence it to read the A, C, T, G series. Once they have the sequence, they decode it, using the same algorithm first used to encode, back into 0s and 1s.

Why store data in DNA?

Storing digital data in DNA has advantages over storage in traditional media, including a higher capacity, increased stability and ease in copying data.

Demand for digital data storage is growing exponentially and outpacing storage capabilities. However, nature has provided a solution to this storage problem: DNA.

DNA's information storage density is six orders of magnitude higher (1018 bytes per cubic millimeter) than any other known storage technology. One kilogram of DNA can store more data than flash memory drives containing 109 kilograms of silicon.

Existing digital data archiving technologies degrade over years and must be replaced approximately every decade. In contrast, DNA can preserve information for centuries or even thousands of years — as evidenced by the DNA extracted from fossils.

The unsung hero of the double helix

Most people know about the seminal paper by Watson and Crick published in Nature in 1953 proposing the double helix model of DNA structure. But fewer know that in the same issue of Nature, a paper by Franklin and her doctoral trainee, Raymond Gosling, provided critical evidence supporting Watson and Crick's arguments. Specifically, the famous photo 51 that shows DNA is, in fact, helical. 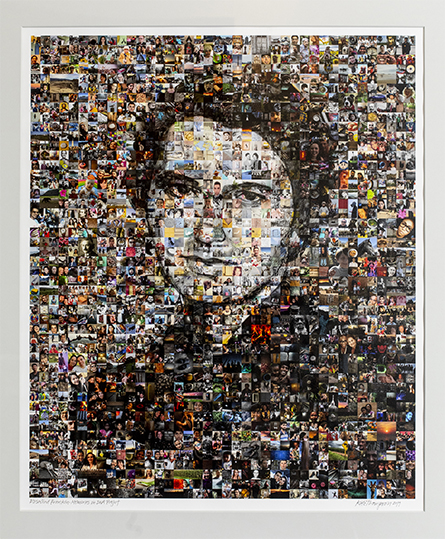 DENNIS WISE/UNIVERSITY OF WASHINGTON
English chemist and X-ray crystallographer Rosalind Franklin and one of her
students created X-ray diffraction images of DNA that led to the discovery
of the DNA double helix. This portrait of Franklin is made up of thousands of
images that have been stored on synthetic DNA.

Watson, Crick and Maurice Wilkins went on to share the 1962 Nobel Prize in physiology or medicine. The contributions of Franklin, who died four years before the Nobel announcement, only began to gain recognition decades later. Her work was highlighted in Photograph 51, a 2015 play by Anna Ziegler, which starred Nicole Kidman.

"Rosalind Franklin was largely responsible for uncovering the structure of DNA, nature's own perfected storage medium," Ceze said in the UW news release. "Her work opened up a whole new avenue of scientific research and discovery for which, to this day, she does not really get the credit that she deserves."

Once the MISL team gathered the thousands of images from more than 80 countries, they encoded them in DNA, then retrieved and converted the individual molecular files back into digital photographs.

The researchers were interested in making the project more tactile, and a chance encounter with artist Kate Thompson led them to embark on a science art journey — in this case, using the encoded memories to ensure that Franklin's contributions to the field of DNA are sealed in memory forever.

The team previously had partnered with Twist Bioscience to preserve significant cultural artforms in DNA. These include musical performances at the Montreux Jazz Festival, the top 100 books of Project Gutenberg and the Universal Declaration of Human Rights in 100 languages.

This project was different, however, and the researchers had concerns. If they put the DNA encoding the images into acrylic paint, would they be able to recover it and retrieve the digital information? What concentration of DNA is sufficient for retrieval?

"Once we had figured out the lowest working concentration of the DNA required, making the painting was practically plausible," said Jeff Nivala, an assistant professor at MISL. 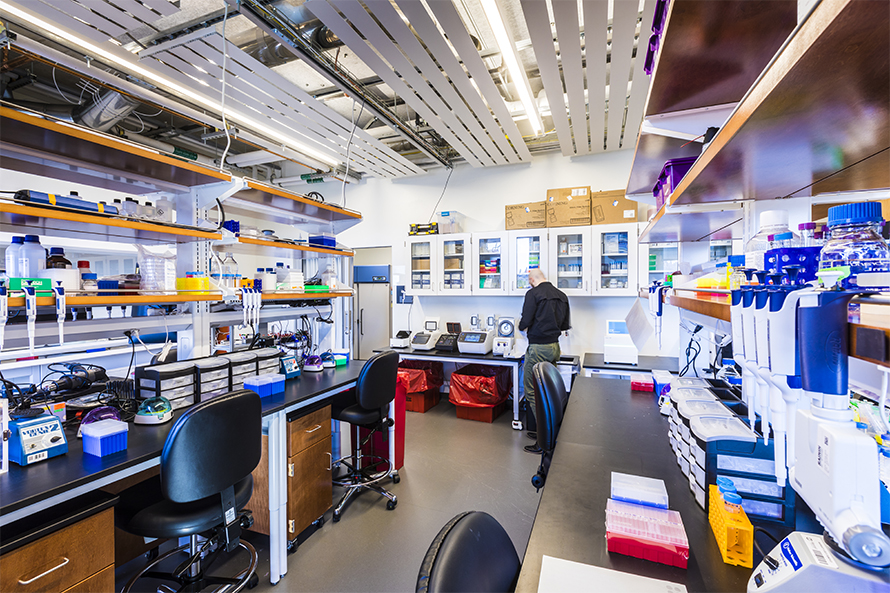 MARK STONE/UNIVERSITY OF WASHINGTON
David Ward at work in the Molecular Information Systems Lab at the University of Washington in Seattle. The lab, a collaboration between UW and Microsoft Research, is developing techniques for long-term storage of digital data using synthetic DNA.

Thompson came to the project with a long-standing interest in emerging technologies, particularly those that focus on sustainability.

During a meeting with Ceze over a glass of wine to discuss details, Thompson said, what started as a project to make a photo collage soon transformed into the elegant idea of superimposing Franklin's portrait on top of it and encoding the full piece in DNA.

"An artist can take a complex process and turn it into metaphor that makes them real for a lay person," she said.

One challenge was to sift through piles of images that people, mostly graduate students, had submitted; this required a lot of art direction and photo editing.

"The next leap was to pick pictures and morph them into the language of Franklin's face and her story, like layering two things on each other," Thompson said. "There are so many untold stories of women in science, especially in that era, and this was a way to commemorate all of them."

After printing out the mosaic, Thompson painted the final image on archival paper with black acrylic ink mixed with a binding substance and the synthetic DNA that codes the images' information.

Measuring 40 by 30 inches, the portrait is now on display in the Bill & Melinda Gates Center for Computer Science & Engineering on the UW Seattle campus.

If any portion of the artwork is submitted to DNA analysis via polymerase chain reaction for amplification, the molecular information can be converted back to digital 0s and 1s.

The future of DNA data storage

The next breakthrough in DNA storage involves moving to data processing directly in DNA — without having to convert the images back into their electronic form. Let's say we need to find all images in the collection with a dog in them. The researchers can use a short complementary DNA strand that encodes for a dog. This complementary sequence serves as a search query that can act as a bait and bind to the sequence coding for a dog within the image — allowing researchers to fish out all images with dogs from the database.

Among the challenges to making such data storage commonplace are the current high cost and slow speed of reading and writing DNA. But the UW researchers are optimistic.

"In the next 10 years, computers may have a molecular processing unit (composed of DNA molecules) as an accessory for compute intensive jobs such as image search on a large data set," Nivala said. "This will increase efficiency not just in monetary gains but also lowering our energy footprint." 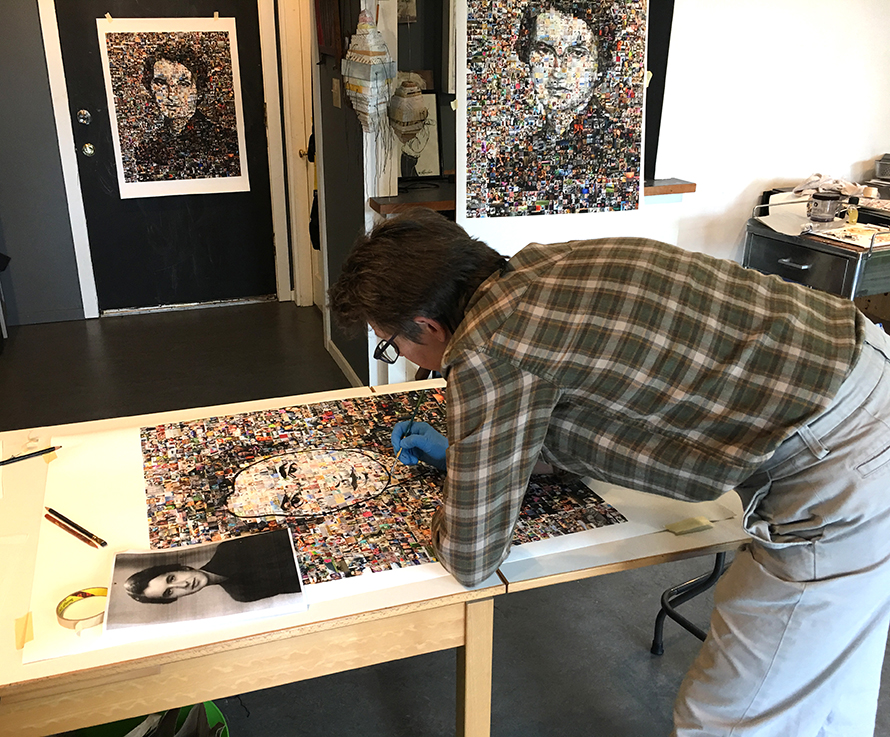 MARY BRUNO
Artist Kate Thompson works on the portrait. After sifting through all the images, she said, "The next leap was to pick pictures and morph them into the language of Franklin's face and her story, like layering two things on each other."