Yang follows the science
where it takes her

Yue (Cindy) Yang grew up in a university environment in her home country of China, and from a young age she pictured herself as a professor at a university. Her father is a mechanical engineering professor and her mother is a dentist, and both helped inspire her to seek a life of science, though her inspiration is also internal. 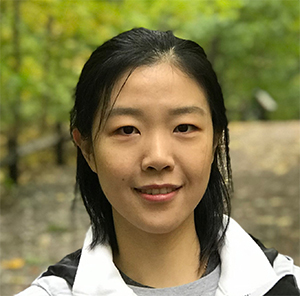 After earning a bachelor’s degree from the Chinese University in Hong Kong, Yang wasted no time in continuing her education and moved to the U.S. to get her master’s. She chose the University of Nebraska so she could study with Ji-Young Lee in the nutritional sciences department. Yang was drawn to the lab’s astaxanthin work, and she enjoyed Lee’s mentorship so much that when Lee moved to the University of Connecticut, Yang followed, joining the Ph.D. program there and continuing her work in the lab.

During her Ph.D., Yang studied the health effects of astaxanthin, an antioxidant carotenoid compound found in algae. She thrived in the lab, loving the freedom to follow the science.

“Sometimes you go into a lab and everything is established, and you just follow and do what everyone has been doing,” she said. “But when I was in Dr. Lee’s lab, we’d have to find what the next step is and decide for ourselves what to do. It was a great experience.”

She took these skills into her postdoctoral fellowship at Weill Cornell Medicine, where she studies NAD+ metabolism in Anthony Sauve’s lab and recently was promoted to instructor. That young girl who always saw herself as a professor seems to be well on her way, following where the science takes her.

Cindy Yang finds the work in Anthony Sauve’s lab incredibly exciting. The innovative and collaborative environment in the lab allows her to dive deep into the NAD+ field with all its nuance and potential to improve human health.

The job of NAD+ is to transfer a hydrogen from one molecule to another. This central activity means that NAD+ is a cofactor for over 500 enzymatic reactions in the cell and is essential to life. Researchers now see that modulating cellular NAD+ levels can have wide-ranging effects in the cell and in the whole body, such as preventing metabolic syndrome and neurodegeneration; it may even slow aging in general. This has inspired many clinical trials and patents, but with typical compounds that increase NAD+ in the cell, the dosage required to see any effect is extremely high.

Yang and her colleagues discovered that a new compound, dihydronicotinamide riboside, or NRH, increases NAD+ levels in cultured cells to an unprecedented level with a lower dose and in as little as an hour. NRH also appears to act as a precursor to NAD+ through a novel pathway. While a novel pathway means a lot of work must be done to find out what exactly is happening in the cells, this new work is opening the door to increasing our understanding of NAD+ metabolism and its effects on human health and may lead to efficient modulation of NAD+ in the clinic.

Leadership on the cutting edge

Toni Antalis, the ASBMB’s new president, talks about reopening her lab after COVID-19 closures, how she’s repurposing anthrax toxins to fight cancer and the most interesting book she has read lately.

When the pandemic forces a New Jersey science fair to go digital, judges and student competitors have to learn a whole new way of presenting research.

Promotions, honors, milestones and more. Find out what's going on in the lives of ASBMB members.

The American Society for Biochemistry and Molecular Biology welcomes new members who joined in March.