When she was an undergraduate at the University of Copenhagen, Kirstine Lavrsen became fascinated by the impact of posttranslational modifications, or PTMs, on cellular function. She was working with Hans Wandall’s group at the university’s glycomics center, researching the role of glycosylation in cancer and how cancer-associated changes in O-glycans could be used to target solid tumors. 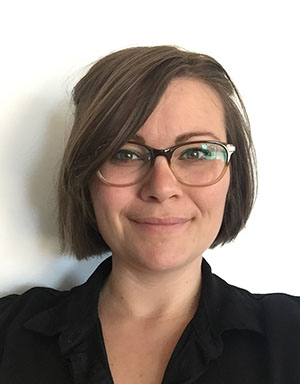 Kirstine Lavrsen is a postdoctoral researcher in Marin Barisic's lab at the Danish Cancer Society.

“So many protein glycosylations are modified in cancer,” she said. “The research possibilities were endless.”

A native of Denmark, Lavrsen earned her bachelor’s and master’s degrees in molecular biomedicine from the University of Copenhagen. Pursuing a Ph.D. in cellular and genetic medicine seemed like the natural and best next step, she said, and she continued her doctoral research in Wandall’s laboratory.

For her Ph.D., Lavrsen researched the role of O-glycosylation in colorectal carcinogenesis. She identified an important role for a PTM enzyme, GalNAc-T6, in conversion of normal colon tissue into cancerous tissue through its ability to O-glycosylate a small subset of proteins. She then used antibodies targeting cancer-specific O-glycans to distinguish between cancerous and normal tissue and to induce cancer-specific cell death.

“Recent findings show that PTMs have been playing a bigger role in cancer development than earlier thought,” Lavrsen said. She hopes that further understanding of PTMs in cancer cells will lead to improved early diagnostic tools, targeted drugs and immunotherapies.

PTMs continue to fascinate Lavrsen. She now works as a postdoctoral researcher in Marin Barisic’s lab at the Danish Cancer Society, investigating the role of another PTM, detyrosination of tubulin, during cancer development.

Lavrsen said she enjoys the analytic and creative blend of research work. When not in the lab, she enjoys spending time with her young children.
This time is an exciting phase in cancer research, she said, and she is optimistic about where the research will take her next.

Epithelial cancers are characterized by aberrant expression of O-glycans sugar molecules in cancerous cells. Addition of these sugar molecules is mediated by a post-translational modification — O-glycosylation — through a large family of GalNAc transferases, or GalNAc-Ts.

Analyzing transcriptomic and immunohistochemistry data, Hans Wandall’s research group found that GalNAc-T6 was the only GalNAc-T that was highly expressed in colon cancer and was absent from healthy colon tissue. To investigate the specific role of GalNAc-T6 in the development of colon cancer, the group used CRISPR/Cas9 to develop isogenic colon cancer cell lines with a knockout/rescue system for GALNT6. GalNAc-T6 expression was associated with a cancerlike dysplastic growth pattern, whereas GALNT6 knockout cells showed a more normal differentiation and phenotype. Mass spectroscopy identified that GalNAc-T6 targeted a subset of proteins involved in cell-cell adhesion.

This study highlights the importance of a post-translational modification in cancer development, and its publication in the Journal of Biological Chemistry earned Kirstine Lavrsen a JBC Herbert Tabor Early Career Investigator Award. Lavrsen said she is excited and humbled to receive the award and looks forward to presenting her talk at the American Society for Biochemistry and Molecular Biology annual meeting in April.