Many cancer treatments block hormones that drive tumor cell division and metastasis. These therapies only shrink tumors temporarily, however, as cancer cells can use alternative signaling pathways to reduce their hormone dependence. Drugs that target these pathways may halt tumor growth and extend patient survival.

Manisha Dagar has uncovered the details of a signaling pathway that drives advanced prostate cancer. 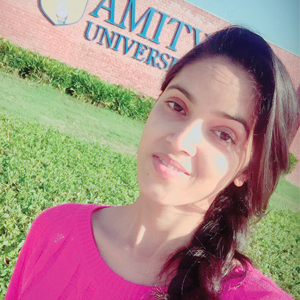 Dagar has always been interested in science, especially biology. Her mother encouraged her to pursue higher education and a research career. She earned an undergraduate degree in biotechnology, and a summer internship at the National Centre for Disease Control in New Delhi gave her the lab experience she needed to pursue a Ph.D. at Amity Institute of Biotechnology, Amity University in Haryana, India.

At Amity University, Dagar decided to study the molecular biology of cancer. She joined Gargi Bagchi’s lab, where she studies androgens, the male sex hormones, in prostate cancer. Previous research revealed that protein kinase A, which phosphorylates proteins to change their functions, can activate androgen signaling in the absence of hormones. Dagar and colleagues in the lab discovered how this aberrant activity contributes to prostate cancer progression.

Dagar studied protein kinase A function in a cell line derived from a prostate cancer patient. After optimizing protocols to measure protein levels in these cells, Dagar could track how blocking protein kinase A phosphorylation activity changed androgen signaling. Her work has revealed new drug targets that could treat advanced prostate cancer.

Dagar successfully defended her Ph.D. thesis in January. She hopes to pursue postdoctoral research studying cell signaling. Outside the lab, she enjoys reading and traveling.

Testosterone and related androgen hormones act through the androgen receptor, which is stabilized in the cytoplasm by the molecular chaperone HSP90. When the receptor binds an androgen, it releases HSP90 and enters the nucleus to regulate gene expression. Androgens thus direct the development and maintenance of the prostate gland but also drive prostate cancer.

Manisha Dagar and her colleagues knocked down protein kinase A to learn how this enzyme affects androgen receptor nuclear entry. They discovered that protein kinase A phosphorylates HSP90, causing it to release the androgen receptor. The receptor then binds HSP27, a different molecular chaperone, which helps it enter the nucleus. Once in the nucleus, the receptor can bind certain DNA regions to turn on genes.

“By targeting HSP90 phosphorylation by protein kinase A, androgen signaling in prostate cancer cells can be blocked,” Dagar said. “This can be used as a therapeutic target for treatment of prostate cancer.”

Dagar and her colleagues continue to search for ways to block prostate cancer cell proliferation, including in patients that express hormone-independent variants of the androgen receptor.