Multiple sclerosis is an immune-mediated disease affecting the central nervous system. In MS, the myelin layer of the nerve cells is damaged by the immune system, creating plaques or lesions that cause problems in signal transmission between the brain and the rest of the body. According to the National Multiple Sclerosis Society, more than 1 million people in the U.S. live with MS. Symptoms include numbness of limbs, vision problems, fatigue and dizziness. There is no cure, but treatments might help to manage symptoms and disease progression. Scientists are looking for potential biomarkers to understand the stages of the disease's development. 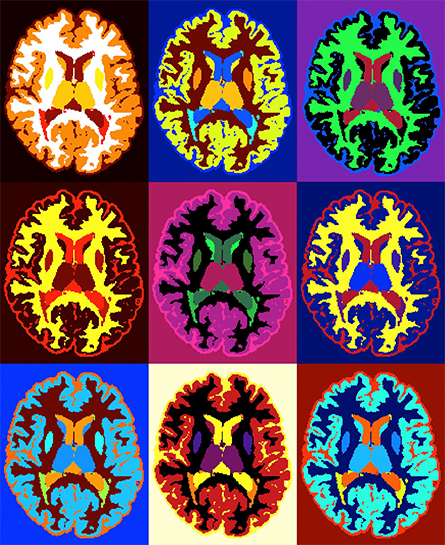 Ilena George and Daniel Reich, National Institute of Neurological
Disorders and Stroke, National Institutes of Health
Axial MRI scans of the brain of a person with multiple sclerosis have been segmented
into various tissue types.

Maria Podbielska, a researcher at the Ludwik Hirszfeld Institute of Immunology and Experimental Therapy in Poland, has been working to identify these biomarkers. Her interest in MS developed during her postdoctoral fellowship in Edward L. Hogan's laboratory at the Institute of Molecular Medicine and Genetics in the Medical College of Georgia, Augusta University, between 2005 and 2010. There, she worked on projects involving the pathological mechanisms of MS.

"MS is heterogeneous with respect to clinical, genetic and pathologic features," Podbielska explained. "Therefore, a set of verified and specific biomarkers for each pattern of immune-mediated brain damage needs to be developed in order to recognize them in the general non-biopsied MS population."

Multiple sclerosis consists of two pathological processes: inflammation, or active phase, and neurodegeneration, or inactive or chronic phase. Both phases begin from the onset of the disease, but they develop at different rates. Sphingolipids, or SLs, are an important component of the myelin sheath and could be biomarkers to track these phases.

In a recent paper in the Journal of Lipid Research, Podbielska and her colleagues wrote that they found sphingolipid species as potential biomarkers for the inflammatory and neurodegenerative processes involved in MS pathology. They did a sphingolipodomic analysis using high-performance liquid chromatography–tandem mass spectroscopy in postmortem specimens of normal-appearing white matter from healthy central nervous systems and from patients with active and inactive stages of the disease.

The tissue studies implicated sphingolipid biosynthesis in active MS lesions, Podbielska said, but the researchers noticed a different pathological scenario for inactive MS nervous system damage, where the sphingomyelin-ceramide-hexosylceramide metabolic pathway could be responsible for damage to neurons.

"The most important observation is related to our discovery of some kind of MS diagnostic 'red flag' — a striking increase of the ceramide-1-phosphate levels in progressive MS lesions," she said.

Podbielska plans to continue her work to find more potential lipid biomarkers that might help to develop therapeutic treatments for MS.