Whether or not your holiday celebrations involve imbibing, the cultural link between champagne flutes and festivities is strong. The fizz and pop of sparkling wine give breaking out the bubbly a special pizzazz. 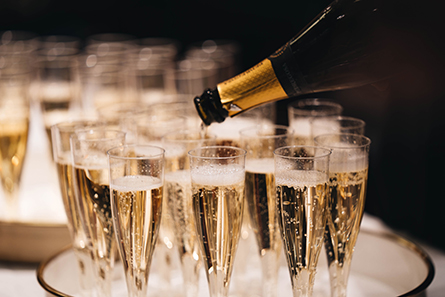 Alexander Naglestad on Unsplash
Bubbles are the enemy in many laboratory protocols. But if you’re using yeast to purify proteins, fear not; seripauperin 5 rarely is expressed in lab strains of Saccharomyces, probably because they’re coddled compared to the anaerobic environment of a bottle of champagne.

In the first glycoproteomics study of its kind, a research team reports in the journal Molecular & Cellular Proteomics that glycoproteins are an important part of keeping those bubbles in solution. Cassandra Pegg and colleagues at the University of Queensland put a variety of sparkling wines under the microscope — or, more accurately, into the mass spectrometer — in hopes that the work would lead to better wine-making methods.

“Sparkling wine is really difficult to pipette,” Pegg, a postdoctoral researcher in Ben Schulz’s lab, said. “We have had some sets of samples that were gushing” — that’s a wine-biz term for when bubbles won’t stay in solution — “and the tubes would pop open in the lab.”

Gushing, when champagne or cava comes foaming out of an opened bottle, entertained Pegg and her colleagues. But it’s less than desirable commercially: Winemakers want the dissolved gas to come out of solution slowly, making a beverage that continues to bubble until it’s finished.

Sparkling wine’s carbonation results from two rounds of fermentation. After producing a base wine, winemakers mix in a solution of yeast and sugar and seal it all into a bottle to trap the carbon dioxide the yeast produce. The yeast strain, grape blend and tweaks to the production process can affect the quality of the final product — but the process is often a matter of trial and error.

To understand more about molecular attributes leading to positive prosecco properties, the researchers degassed samples of sparkling wine that had been aged for different periods or fermented with different strains of yeast. They used proteomic and glycoproteomic techniques to characterize the brews. Wine doesn’t have much protein, and most of the proteins they found were secreted by yeast or found in their cell walls. A surprisingly high proportion were glycosylated, or modified with complex sugar molecules.

As wines age, their proteins and glycopeptide constituents change. According to Ben Schulz, the professor who led the work, changes late in the aging process, when “no biology should be happening,” probably depend on the biophysics of protein solubility. Glycosylation can make a peptide more water-soluble and less likely to clump into sediment.

Similar principles may guide a wine’s propensity to gush. Researchers previously had found that a yeast cell wall protein called seripauperin 5 can stabilize foam; this and related proteins were among the most abundant that Schulz’s team identified.

“It’s not completely understood,” Schulz said of the protein’s foam-stabilizing effect. “But from a biophysical standpoint, it makes sense: Glycans tend to be hydrophilic, and peptides hydrophobic.” By clustering at the interfaces between liquid and gas, small glycopeptides could affect a wine’s surface tension and change the rate at which dissolved gas coalesces into bubbles and escapes.

By understanding the production methods that affect seripauperin 5 and other glycoproteins, Schulz said, he hopes to work in the future with winemakers looking to optimize their products.