A novel player involved in kidney injury response. The role of the Kaposi’s sarcoma-associated herpes virus in kinase pathway activation. Understanding what a linker does in heme extraction. Read about these papers recently published in the Journal of Biological Chemistry.

Fibrosis involves the excessive accumulation of extracellular matrix, which may result in loss of function when normal tissue is replaced by scar tissue, such as after injury. In the case of kidney disease in particular, fibrosis is the final step in chronic disease characterized by the accumulation of interstitial fibroblasts and myofibroblasts in addition to ECM accumulation. 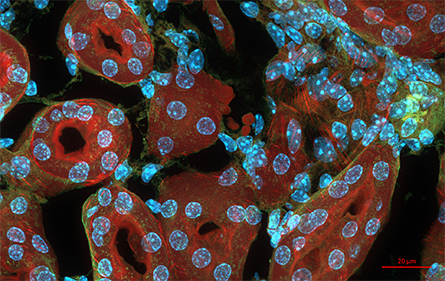 Follistatin-like 1 is a secreted protein. While the role FSTL1 plays in heart and lung injury and development of fibrosis have been studied widely, the role this protein plays in kidney injury and progression to chronic disease remains to be determined.

In a recent article in the Journal of Biological Chemistry, Yu Zhang and colleagues from the School of Biomedical Sciences at the Chinese University of Hong Kong and the Center of Nephrology and Urology at Sun Yat-sen University in China report that FSTL1 plays a profibrotic role in the kidney.

The team used several molecular biology and imaging techniques — including single-cell RNA-Seq analysis and immunofluorescence — to show that Fstl1 was enriched in stromal cells in obstructed mouse kidneys and that FSTL1 expression was induced in fibroblasts during kidney fibrogenesis in mice and in human patients.

The Kaposi’s sarcoma-associated herpes virus is the main etiological agent of Kaposi’s sarcoma, which manifests as patchy cancerous tumors on the skin and mucus membranes. It most often affects people with immune deficiencies, such as those with HIV/AIDS.

The virus — known as KSHV and human herpesvirus 8 — belongs to the same family as Epstein–Barr virus, which is responsible for causing infectious mononucleosis and several cancer types and recently has been implicated in the development of multiple sclerosis.

The virally coded oncoprotein vFLIP is known to upregulate the inhibitor of kappa B kinase, or IKK, complex, activating the canonical nuclear factor κB signaling pathway, a major factor in KSHV pathogenesis.

The physical interaction of vFLIP and the IKK kinase regulatory component, IKK gamma, is essential for persistent activation and has been studied widely; however, how the kinase subunits are active mechanistically remains to be determined.

In a recent Journal of Biological Chemistry article, Claire Bagnéris, Swathi L. Senthil Kumar and collaborators at the Institute of Structural Molecular Biology in London report that vFLIP alone is sufficient to activate the IKK kinase complex. The researchers used a combination of cell-based assays and biophysical and structural biology techniques.

In the end, this novel study determined that vFLIP-induced NF-κB activation relies upon structurally specific vFLIP–IKKγ multimers that are essential to activate kinase subunits by autophosphorylation.

The proof is in the linker

Iron acts as an electron carrier and a co-factor in many proteins; this makes it an essential nutrient for living organisms, including pathogenic bacteria such as Staphylococcus aureus, which is responsible for deadly nosocomial infections.

The iron-regulated surface determinant system is a family of proteins that sequesters iron from the host to support bacterial growth and is therefore a potential therapeutic target. The surface protein IsdH consists of three near-iron transporter, or NEAT, domains connected by linkers, and it is responsible for capturing hemoglobin.

In a recent Journal of Biological Chemistry article, Sandra Valenciano–Bellido and colleagues at the University of Tokyo characterized the linker region between the NEAT2 and NEAT3 domains using multiple biophysical techniques to understand better the role it plays in heme extraction.

The researchers showed that the linker region contributes to the stability of the bound protein and this, in turn, influences the flexibility and orientation of the NEAT3 domain in its interaction with hemoglobin.

The authors suggest this model explains how the linker region facilitates NEAT3 positioning to sequester heme, and they argue that the study adds to researchers’ understanding of the mechanism of heme extraction of human hemoglobin by IsdH.