Listening and learning at the Brooklyn Botanic Garden

The Brooklyn Botanic Garden is hosting an exhibit and audio tour titled Ohkehteau (Plants of the Earth): A Shinnecock Oral History that showcases many of the medicinally important plants native to New York City.

Chenae Bullock, an enrolled Shinnecock Indian Nation tribal member and descendant of the Montauk tribe in Long Island, N.Y., provided the research on the plants uses and narrated the self-guided audio tour.

I had a chance to visit the garden this summer and followed the audio tour. I learned about how the Indigenous people of New York used common plants for important medicinal techniques and how to identify them in their native habitats.

In an interview on the garden’s website, Bullock said that, although she didn’t always live on the Shinnecock Reservation in Southampton, N.Y., she always had a garden of traditional food plants thanks to her mother. She also credited members of the tribal community with educating her about the uses of certain plants.

“Even though my mom created the foundation, as I got older, I learned so many things about plants from many people throughout my life,” she said.

Traditional medicine is an underestimated aspect of health care. Indigenous peoples have treated and cured illnesses using the plants native to their lands for thousands of years. Settlers followed Indigenous practices to survive the unfamiliar territory they attempted to control.

Organizations such as the World Health Organization and the United Nations have reaffirmed the right for Indigenous peoples to practice traditional medicine, with the understanding that these medicines are safe and efficacious.

While Western medicine does not prescribe boiling certain leaves for tea to treat colds, many native plants used for traditional medicine have been analyzed for bioactive compounds by modern science.

For Native American Heritage Month, below I have written about some plants native to New York City, all of which were highlighted on Bullock’s tour. I’ve highlighted their traditional uses as well as current scientific research on their active components. 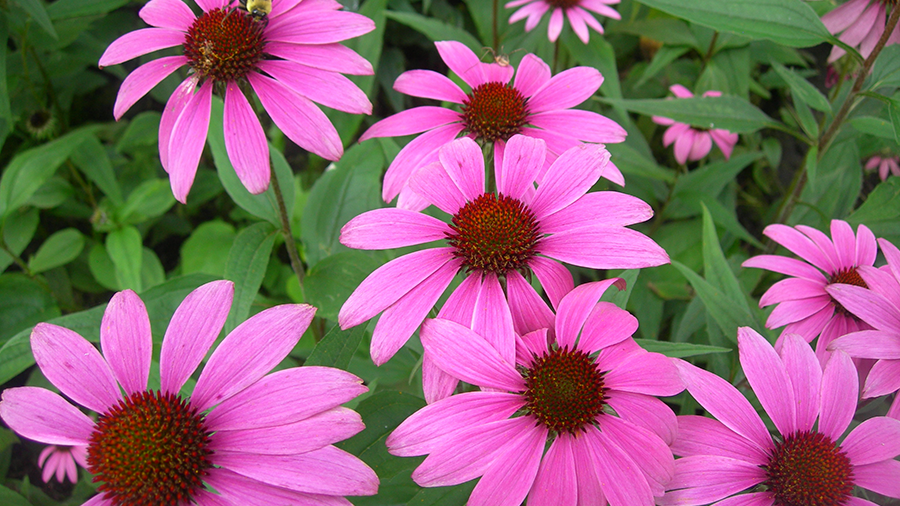 Atilin on Wikimedia Commons
According to the National Center for Complementary and Integrative Health, "Echinacea is promoted as a dietary supplement for the common cold and other infections, based on the idea that it might stimulate the immune system to more effectively fight infection. Echinacea preparations have been promoted for topical use (application to the skin) for wounds and skin problems."

Echinacea is a genus of flowering plants. There are nine known species native to North America.

Echinacea purpurea, the purple coneflower, is used in Shinnecock practice as an immune stimulant and antibiotic.

According to the National Center for Complementary and Integrative Health, a center of the National Institutes of Health, “Many studies have been done on echinacea for the common cold and other upper respiratory tract infections.”

E. purpurea has been analyzed by many integrative health and allopathic research labs for clinical activity. Several groups of constituents — including alkamides, caffeic acid derivatives, polysaccharides, and alkenes — may contribute to activity.

An article in the Journal of Pharmacy and Pharmacology in 2005 noted that immunological effects include enhancement of macrophage function and stimulation of production of the cytokines IL-1, IL-10 and TNF-α.

The NCCIH notes: “Recent NCCIH-sponsored research suggests that the effect of echinacea on immune cells may depend on the types and amounts of bacteria within the echinacea plants and that the composition of the soil in which the plants are grown can affect this bacterial community. However, these findings come from laboratory studies of isolated cells, not studies in people.” 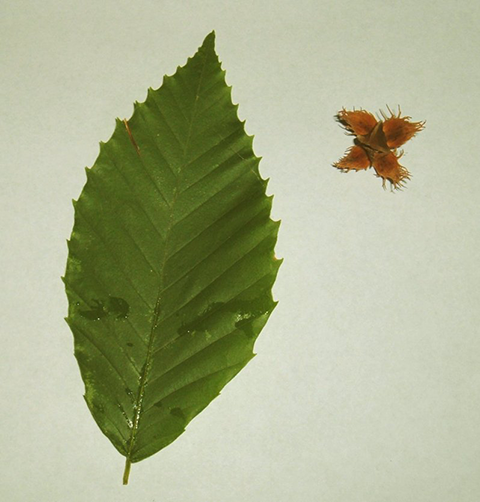 Kevinlyfellow on Wikimedia Commons
The American beech produces leaves with small teeth and sharply angled nuts, which come in pairs in a husk.

Fagus grandifolia, known commonly as the American beech tree, is a shade tree common to the East Coast. It can grow to 70 feet at maturity.

Beechnuts were commonly collected by the Shinnecock people and used to relieve headache and ease digestion. “(The) leaves can be boiled to create a salve with proven pain-relieving properties,” Bullock said.

Young beech leaves, between budding and maturation, emit many terpenes, including β-caryophyllene. An article published in PLoS ONE in 2019 found enhanced re-epithelialization of mouse tissue when β-caryophyllene was applied as a topical treatment to injury on mice.

β-caryophyllene is a ligand of the type 2 cannabinoid receptor, a member of the G protein–coupled receptor family. The CB2 receptor is most abundantly expressed in immune function organs, including macrophages, the spleen and leukocytes, and indicated to be upregulated in response to inflammation and immune cell activation. 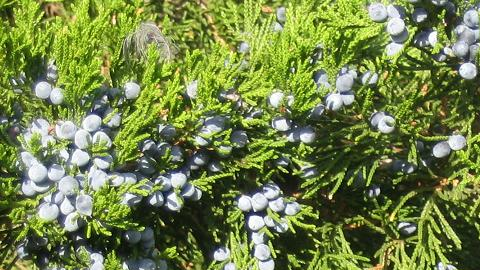 Quadell on Wikimedia Commons
Juniperus virginiana is a coniferous evergreen that can live for upwards of 900 years. It is considered a pioneer species, meaning that it is one of the first to rebound in damaged lands.

The eastern red cedar is the most widely distributed eastern conifer in North America, native to 37 states and many Canadian provinces. Cedar wood is prized as a building material, and cedar oil acts as a natural insect repellant.

On the audio tour, Bullock said that her “ancestors used cedar for cough medicine, tuberculosis and fevers.”

An extraction study published in the journal Molecules  in 2019 identified the major constituents of J. virginiana essential oils, which contained mostly monoterpene hydrocarbons. In a dose-dependent manner, monoterpenes derived from plant essential oils have been found to have antiviral and antibacterial activity.

A study in the journal Physiology & Behavior in 2018 investigated the anxiety-reducing effects of J. virginiana essential oil in mice. Researchers established two potential pathways for the oil’s activity: via 5-HT or dopamine production pathways. 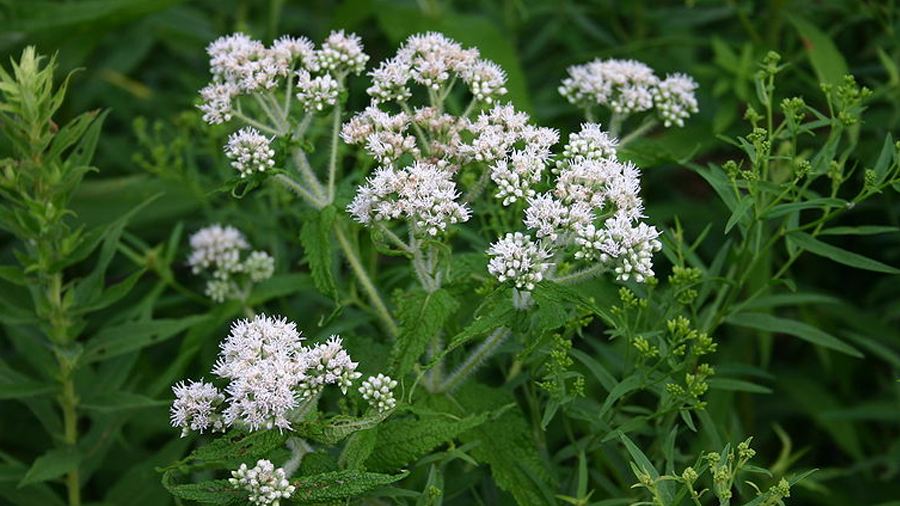 SB_Johnny on Wikimedia Commons
According to the Missouri Botanical Garden, "Though some authorities claim the name boneset refers to a former use of the plant to aid the healing process for broken bones, others claim that the name is in reference to the plant's use as a diaphoretic in the treatment of an 18th century influenza called break bone fever." (Bone break, sometimes spelled as bonebreak, fever also may refer to dengue or Chikungunya.)

E. perfoliatum’s common use is reflected in its name — common boneset. Boneset has been used to treat bone breaks or fractures by Indigenous peoples because of its purported high calcium content.

“The dried leaves have been used to make a tonic, boneset tea, which was thought to be effective in treating colds, coughs, fever and constipation,” Bullock said.

Researchers have investigated the cytotoxic and antibacterial effects of an extract of boneset. They found potent cytotoxicity, comparable to the cytotoxic chemical chlorambucil, which is commonly used to treat leukemia and lymphoma. Their work was published in the journal Phytotherapy Research in 2000.

Weak antibacterial effect was only found against gram-positive bacteria.

A study published in the Journal of Ethnopharmacology in 2011 found that the literature for boneset indicates positive results when using boneset extract for the treatment of fever and cold. This anti-inflammatory activity is hypothesized to result in an inhibition of an NF-κB transcription factor by the functional flavonoid eupafolin.

While the self-guided tour closes on Nov. 7, the audio segments are still worth listening to. Many of the plants that Bullock mentions are native to the entire eastern seaboard, and some extend into the Midwest.

As Bullock said on the tour website, “It’s hard to protect what you cannot recognize. This tour was made with good intent to share the value of the plants and, in turn, protect our Earth.”