Plasma membrane is no barrier to free fatty acid

Our understanding of how long-chain fatty acids cross membranes is changing based on recent work by James Hamilton’s laboratory at Boston University and others. Their research shows that unlike nutrients such as glucose or amino acids, which require a transporter, fatty acids can diffuse spontaneously through protein-free lipid bilayers and cells’ plasma membranes.

A recent paper in the Journal of Lipid Research by Anthony Jay and colleagues reveals how molecules previously thought to inhibit fatty acid transport specifically, including sulfosuccinimidyl oleate, or SSO, fit the diffusion model.

Control of fatty acid entry into cells is difficult to visualize. Researchers often have used fatty acid metabolites that become trapped in the cell to infer transport by plasma membrane proteins. The Hamilton lab has focused on distinguishing transmembrane movement from metabolism.

The lab made a seminal discovery that transport of fatty acids across a bilayer can be followed by pH changes. They combined a fluorescent fatty acid reporter with phospholipid vesicles enclosing a pH-probe to measure absorption in real time. They showed that natural fatty acids can acquire a proton near the outer leaflet, leading to equilibrium between neutral and ionized forms. The net neutral fatty acid spontaneously diffuses across the bilayer and then releases the proton near the inner leaflet, reducing the internal pH. This energy-free diffusion has been termed the “flip-flop” mechanism. 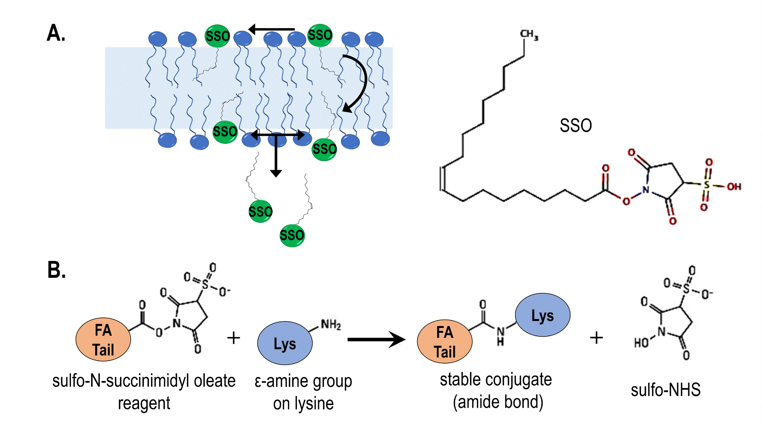 James Hamilton/JLR
This schematic shows that (A) sulfosuccinimidyl oleate can flip-flop across the bilayer to enter cells, and (B) it can modify amino acids.

“Our studies also showed that all fatty acids studied … exhibit rapid flip-flop, and that this mechanism is reversible,” Hamilton said.

The researchers were excited by this finding but acknowledge that it does not exclude a role for proteins. Jay said, “If fatty acids can simply diffuse into cells, how could there be inhibitors of this transmembrane movement?”

The research informs nutritional considerations, Hamilton said. “Metabolism, and not the plasma membrane, controls the retention of fatty acids in cells, by trapping the fatty acids. Although membrane proteins may bind fatty acids or participate in metabolism, they cannot block diffusion in the surrounding bilayer.” 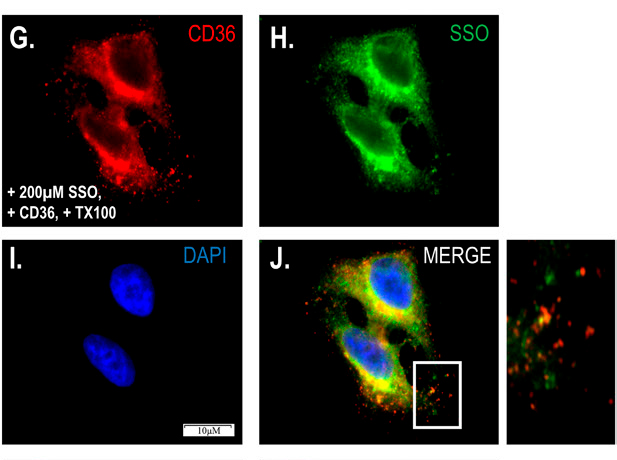 In fact, cells with and without CD36 exhibited the same diffusion, but CD36 increased the content of intercellular lipids.

According to Maastricht University researchers Jan Glatz and Joost Luiken, the Hamilton lab’s results also could be interpreted as a step toward integration of the argument that fatty acids diffuse across the cell membrane and the view that the protein CD36 is required for fatty acid uptake. In a Letter to the Editors of the JLR, Glatz and Luiken lay out their view that CD36 may be helpful but not necessary for lipid uptake.