Rodents in space: Keeping bone and muscle strong on the ISS

Researchers helped mice stay mighty with an experiment to counter the effects of microgravity. The gene treatment might also enhance muscle and bone health on Earth — and in humans.

A sojourn in space is a great way to ruin one’s physique — the microgravity results in dramatic loss of muscle mass. Residents of the International Space Station exercise regularly to stave off the atrophy, but perhaps there’s another way. Scientists have now found that if they treat spacefaring mice with a particular molecule, the animals not only maintain their muscles, they even bulk up a bit. 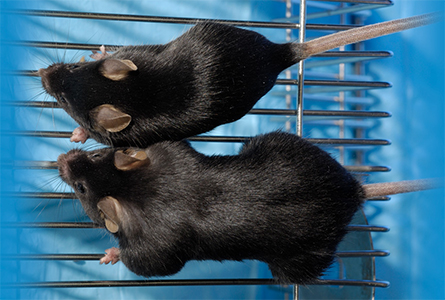 The treatment also preserved and boosted bone density, another problem in microgravity, researchers reported September 7 in the Proceedings of the National Academy of Sciences.

The work has implications not just for astronauts eyeing trips to the moon or Mars, but also for earthbound people struggling with muscle loss due to age, injury or illness. Potential medications springing from this research might benefit people who are bedridden or in a wheelchair, as well as people with cancer, chronic obstructive pulmonary disease or other causes of muscle wasting, says study author Se-Jin Lee, a geneticist at the Jackson Laboratory for Genomic Medicine in Farmington, Connecticut. “There are so many possible indications.”

Lee has longed to send his mice to space for decades. Back in the 1990s, he eliminated a gene called myostatin from mice. The myostatin protein normally blocks muscle growth, so without it, the mice grew to be quite buff, with double the muscle mass of regular mice.

Lee got his chance on December 5, 2019, when 40 mice launched on a SpaceX craft from Kennedy Space Center in Cape Canaveral, Florida. This allowed Lee to test how the “mighty mice” muscles reacted to 33 days of space conditions. He and his colleagues saw that while normal mice lost muscle mass, the mighty rodents stayed ripped.

Eliminating the myostatin genes of people suffering muscle loss would be impractical, of course. So Lee and colleagues also tested a way to preserve muscle in normal mice. Normally, myostatin acts to shut off growth by attaching to a receptor that is stuck on the surface of muscle cells. Lee and colleagues sent up a fragment of this receptor, and astronauts on the ISS injected it into the animals’ bloodstreams. This “decoy” receptor captured the animals’ myostatin molecules and kept them away from muscle tissue. 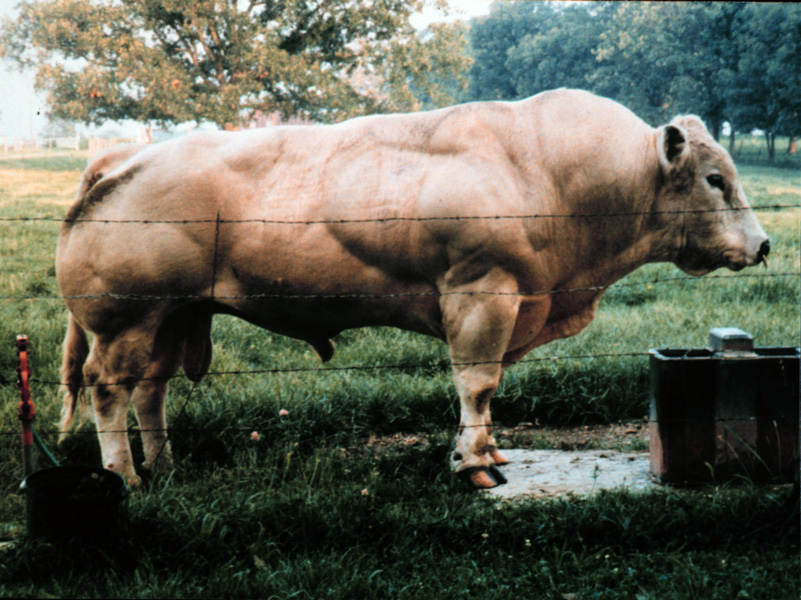 A.C. McPHERRON & S.J. LEE / PNAS. © 1997 NATIONAL ACADEMY OF SCIENCES
The Belgian Blue breed of cattle has a trait referred to as “double-muscled.” Scientists now know that it is caused by a mutation in the animal’s myostatin gene. The trait, despite its name, doesn’t fully double the musculature but increases it by 20 to 25 percent.

The decoy has another effect: It traps a second protein, called activin A, which also prevents growth of muscle — as well as bone. Sure enough, space mice injected with the decoy receptor gained a double benefit: They kept their muscles buff and their bone density high. Bone and muscle even grew, so that the treated mice touched down with more of those tissues than untreated mice that were left on the ground.

The team also tested whether the treatments could reverse muscle wasting and bone loss that had already happened. To do this, they gave the decoy receptor to regular mice that had lost muscle and bone mass on the ISS, after they’d splashed down in the Pacific on January 7, 2020, and been taken to land in San Diego. These animals quickly recovered both bone and muscle; their muscles even grew bigger than they’d been before takeoff.

The results suggest that there could be a way to use a drug to protect astronauts from muscle and bone loss, says David Glass, vice president for research on aging and age-related disorders at Regeneron Pharmaceuticals in Tarrytown, New York. He cautioned, however, that space atrophy is different from Earth-based forms.

Nonetheless, Lee’s hope is that blockers for myostatin and activin A could preserve or restore muscle on the ground. Physiologist Christoph Handschin of the University of Basel in Switzerland agrees, but he adds a caveat: “This looks super-promising — if this can be translated into humans.” Handschin, who laid out the landscape of therapies for muscle wasting in the Annual Review of Physiology, notes that several drug companies have tried to treat people with compounds that interfere with myostatin, without much success.

Lee is optimistic, though. He suspects that blocking myostatin in people is not sufficient, so he hopes that compounds like the decoy receptor that engage activin A might prove more effective than earlier compounds did. Glass says that to avoid side effects, it would be important to design a medication that is unlikely to interact with molecules other than myostatin and activin A, as the decoy can.

And while supporting human space travel isn’t Lee’s main goal, such a molecule could, perhaps, catch NASA’s interest as the agency plans for longer space missions that will probably not have room for extensive gym equipment.