Antibody interactions that change cytotoxicity. An atlas for macrophage activation. Anti–Zika virus natural products. Read about papers on these and other topics in the Journal of Biological Chemistry. 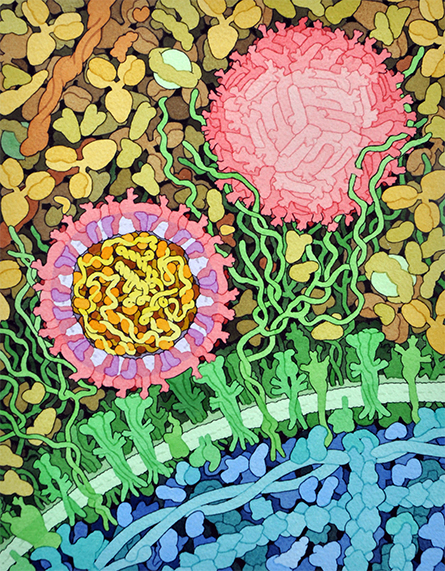 Dave Goodsell/Wikimedia Commons
This space-fill drawing shows the outside of one Zika virus particle and a cross
section through another as it interacts with a cell.

Zika virus is a flavivirus related to yellow fever, dengue and West Nile. It emerged from obscurity in 2013 when it spread from Asia to the South Pacific and the Americas, reaching epidemic levels by 2016. While symptoms of Zika are generally mild, if a pregnant woman is infected, the virus can cross into the placenta, posing a risk to the developing fetus for microcephaly and other neurologic abnormalities. With no available vaccines or antiviral treatments, researchers are working to identify compounds that will address the need for Zika therapies.

Cyclohexadepsipeptides are natural products produced by a variety of organisms spanning the phylogenetic tree, including fungi, higher plants and cyanobacteria. The fungal cyclohexadepsipeptides destruxins, isaridins and isariins — or DTXs, ISDs and ISRs, respectively — contain unusual nonproteinogenic amino acid–building blocks and perform a range of antiviral activities. Researchers have not yet identified the biosynthetic gene clusters for ISDs and ISRs or fully characterized the biosynthesis of a particular natural product nonproteinogenic residue, (3S)-methyl-l-proline residue.

In a paper published in the Journal of Biological Chemistry, Bochuan Yuan and colleagues at Peking University examined the extract of the marine-derived fungus Beauveria felina SX-6-22 and discovered 30 DTXs, ISDs and ISRs, including seven new compounds. Using anti–Zika virus assays, the authors showed that seven of the 30 compounds inhibited Zika virus RNA replication and nonstructural protein 5 production in Zika-infected A549 cells. The authors also sequenced the genome of B. felina SX-6-22; identified three biosynthetic gene clusters — detx, isd and isr — which are responsible for the biosynthesis of DTXs, ISDs and ISRs, respectively; and clarified the biosynthetic relationships among these cyclohexadepsipeptides. Finally, the authors defined the entire biosynthesis of nonproteinogenic building block (3S)-methyl-l-proline.

Together, these findings identify compounds with anti-Zika properties and provide opportunities for biosynthetic pathway engineering to generate new anti-Zika cyclohexadepsipeptides.

Monoclonal antibodies, or mAB, are a fast-growing class of biotherapeutic agents used for the treatment of many diseases, including cancer, autoinflammatory diseases, cardiovascular disease and, most recently, COVID-19. Binding of these antibodies to their receptors is a core component of the innate immune system, and understanding the interaction between antibodies and their Fc receptors — which interact with the tail, or Fc, region of antibodies — is essential for the engineering of effective mAB biotherapeutics. One such interaction that is important to consider when designing mAB therapies is antibody-dependent cellular cytoxicity, or ADCC, a mechanism of cell-mediated immune defense whereby an immune effector cell lyses a target cell identified by bound antibodies. This effect can be either favorable or unfavorable, depending on the desired mechanism of action for the mAb being engineered; therefore, understanding how antibody–receptor interactions influence effector function is important for mAB design.

In recent work published in the Journal of Biological Chemistry, Yue Sun and colleagues at Genentech used hydroxy radical footprinting mass spectrometry to provide the first solution-phase evidence that an immunoglobulin G1 with an Fc region devoid of fucose sugar units requires fewer conformational changes for binding with its receptor. Then, using rational mutagenesis guided by molecular dynamics, the authors showed that fragment-antigen binding region–receptor interactions directly contribute to the modulation of ADCC.

Verifying the antiviral potential of Aβ

The role of amyloid-beta, or Aβ, aggregates that form in the brains of Alzheimer’s disease patients was in the news after the Food and Drug Administration’s recent controversial approval of the first Alzheimer’s therapy. The therapy was based on the hypothesis that the pathological events that lead to Alzheimer’s are triggered by accumulation of Aβ peptides; however, researchers have offered alternative hypotheses about the disease’s etiology. One such hypothesis suggests that Aβ peptides possess antiviral effects and are produced by the central nervous system as a defense mechanism. The viral pathogens trigger a pathological cascade, presumably by seeding of Aβ aggregates, which can entrap and neutralize CNS pathogens.

In a study in the Journal of Biological Chemistry, Olga Bocharova and colleagues at the University of Maryland School of Medicine explored the protective capacity of Aβ against viral infection. The researchers infected young 5XFAD mice, which express human amyloid precursor protein and presenilin 1 transgenes with a total of five Alzheimer’s-linked mutations, with one of two strains of herpes simplex virus 1, or HSV-1, at three different doses. They found that, contrary to previous work, the 5XFAD genotype failed to protect mice against HSV-1 infection. HSV-1 replication centers in the 5XFAD mice were partially excluded from the brain areas with high densities of Aβ aggregates, but Aβ aggregates themselves were free of HSV-1 viral particles, and the limited viral invasion to areas with a high density of Aβ aggregates was attributed to phagocytic activity of reactive microglia.

While these findings challenge the antiviral role of Aβ, further studies are needed to support or refute the viral etiology hypothesis of late-onset Alzheimer’s.

RNA sequencing, or RNA-Seq, routinely is used to measure changes to gene expression in response to cellular stimulus and perturbation. The technique provides wide coverage and high resolution of the transcriptome, but its need to fragment RNA molecules limits its ability to capture gene isoforms and their expression patterns. Thus, gene isoforms for follow-up studies may be selected based on annotation databases that are incomplete, not tissue specific, or lacking key information regarding expression levels; this results in lost time and resources when minority or nonexistent isoforms are selected.

In a study published in the Journal of Biological Chemistry, Apple Cortez Vollmers and colleagues at the University of California, Santa Cruz, used the long-read nanopore-based rolling circle amplification to concatemeric consensus method, which does not fragment RNA molecules, to generate an isoform-level transcriptome atlas of macrophage activation, or IAMA, that identifies full-length isoforms in primary human monocyte-derived macrophages. The researchers characterized isoforms for most moderately to highly expressed genes in resting and activated macrophages, and they validated these isoforms by quantitative polymerase chain reaction.

The IAMA, which is freely available in a user-friendly data portal within the UCSC Genome Browser, is a resource for innate immune research that provides unprecedented isoform information for primary human macrophages.