Cholesterol is an essential structural component of cell membranes, where it also can function as a regulator of cellular processes.

In a recent study in the Journal of Lipid Research, Wonhwa Cho and his team at the University of Illinois Chicago developed a technique to precisely control cholesterol levels. Cho believes the new method will benefit biomedical research that can help improve the treatment of cholesterol-associated diseases.

Although researchers can use standard methods such as chemical extraction and enrichment of cholesterol by methyl-beta-cyclodextrin and inhibition of new cellular cholesterol biosynthesis by statins, these techniques do not allow the spatiotemporal depletion of cholesterol, and they can be toxic to the cells. 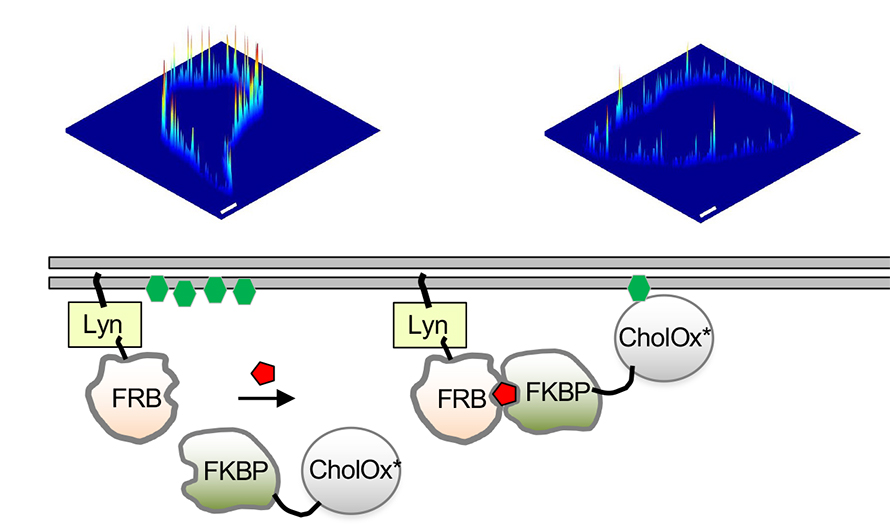 Wonhwa Cho
Site-specific depletion of cholesterol in the inner leaflet of the plasma membrane is accomplished by targeting of an engineered cholesterol oxidase.

Cho’s method takes advantage of an inducible protein dimerization system and the cholesterol-depleting abilities of Streptomyces species cholesterol oxidase, an enzyme that catalyzes the breakdown of cholesterol in a two-step process. First, it must bind to the membrane; then cholesterol is converted to cholest-4-en-3-one, or cholestenone.

Researchers often use protein dimer formation in response to external stimulation to understand the role of protein–protein interactions in cellular functions. The FRB–FKBP dimerization system uses rapamycin, an antifungal antibiotic that simultaneously can bind the FK506 binding protein and the FKBP–rapamycin binding domain of the mammalian target of rapamycin, known respectively as the FKBP and the FRB, resulting in heterodimer formation. Proteins of interest can be fused to FKBP or FRB, and dimerization can be induced by adding rapamycin or analogs such as rapalog.