Defining functional redundancy in mycobacteria. Finding aqueous pores in sodium channels. Identifying new substrates for a ubiquitin ligase. Read about papers on these topics recently published in the Journal of Biological Chemistry.

The tricarboxylic acid, or TCA, cycle is essential to carbon metabolism. Malate oxidation, a critical step of this cycle, is catalyzed by malate dehydrogenase or malate quinone oxidoreductase. These enzymes, Mdh and Mqo, respectively, tend to co-occur in a single bacterium, and one of them is usually primarily responsible for malate oxidation. Although these proteins are present in most bacteria, the level of functional redundancy remains unclear. 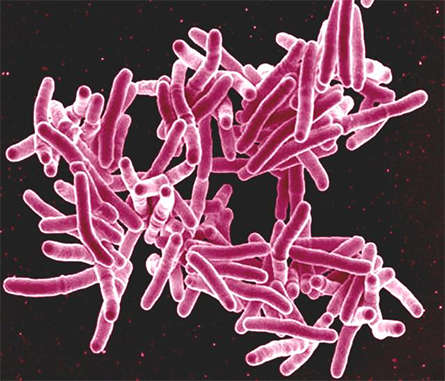 NIAID
A scanning electron micrograph of Mycobacterium tuberculosis bacteria,
which cause TB.

In a recent article in the Journal of Biological Chemistry, Liam Harold and collaborators from the University of Otago in New Zealand describe performing a bioinformatic survey of thousands of bacterial proteomes that revealed that Mqo was not as widespread as Mdh in bacteria and that it was highly conserved in mycobacteria.

The authors conclude that Mdh is maintained in slow-growing mycobacterial pathogens for use under conditions such as hypoxia that require reductive TCA cycle activity.

Epithelial Na+ channels, or ENaCs, belong to the (ENaC)/degenerin family, and their extracellular domains interact with ohter factors that regulate channel gating. These channels influence such functions as blood pressure and vascular smooth muscle and are composed of three subunits: alpha, beta and gamma.

Several studies have identified specific amino acid residues and extracellular domain structures that regulate ENaC gating; however, researchers do not yet understand the transitions that happen at a structural level. In a recent Journal of Biological Chemistry article, Lei Zhang and collaborators at the University of Pittsburgh describe using cysteine, or Cys, scanning mutagenesis to better understand the functional effects of Cys-modifying reagents on palm domain β10 strand residues in mouse ENaC.

The authors show that only mutants in the proximal region of β10 exhibited changes in channel activity in response to methanethiosulfonate reagents. In addition, multiple Cys mutants were activated by low concentrations of thiophilic Cd2+. The researchers also identified four alpha, two beta and two gamma subunit β10 strand mutations that changed the Na+ self-inhibition response.

The authors state this model is consistent with the structure of mouse ENaC that predicts the presence of aqueous tunnels adjacent to the proximal part of β10.

The HECT E3 ligase WWP2 targets lysine residues for ubiquitination in a broad range of proteins involved in different physiological processes. WWP2 is made up of an N-terminal C2 domain, four central WW domains and a C-terminal catalytic HECT domain. The linker peptide between the middle WW domains can autoinhibit the catalytic domain of this protein, and this inhibition can be removed by phosphorylation at the tyrosine residue at position 369. Researchers have yet to determine the range of substrates and functions of WWP2.

In a recent article in the Journal of Biological Chemistry, Hanjie Jiang and collaborators at Brigham and Women’s Hospital describe using protein microarray technology as a platform to identify WWP2 substrates using an activated version of this ligase. This technology can assess enzyme-substrate interactions directly in a high-throughput fashion.