Almost a decade ago, Ralph Panstruga and Jürgen Bernhagen served together on a student’s thesis committee at Rheinisch-Westfälische Technische Hochschule Aachen, a university in Germany. At first glance, Panstruga, a molecular botanist, and Bernhagen, a biochemist in cardiovascular medicine, would seem to have little in common. However, they discovered a shared interest — host immunity — while chatting over coffee after the student’s presentation. 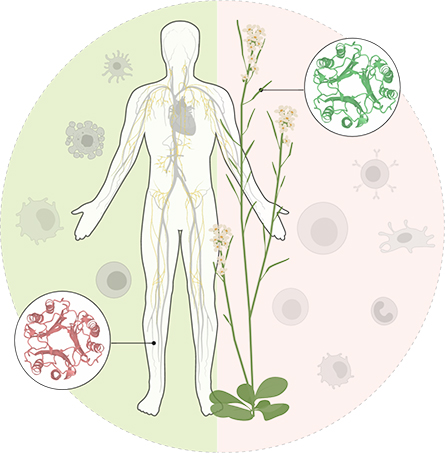 Bernhagen told Panstruga about his research into macrophage migration inhibitory factor, or MIF, a noncanonical cytokine and chemokine that regulates innate immunity and is involved in inflammatory and cardiovascular diseases. Evolutionarily conserved, MIF was incompletely characterized at the time.

“Jürgen told me that he’d heard anecdotes that MIF-like chemokines should also exist in plants, which I couldn’t believe, because chemokines are known to be animal-specific signaling molecules with dedicated receptors and signaling cascades,” Panstruga said. “They were, in my view, unlikely to be present in plants.”

Nonetheless, Panstruga returned to his office and did a computer search that identified related biomolecules based on sequence similarity. He found that Bernhagen was right: Plants have three homologs to MIF known as MIF/D-dopachrome tautomerase–like, or MDL, proteins. However, plants lack cognate receptors, so the scientists wondered about the role of MDL in plants.

Panstruga and Bernhagen began working together to characterize MIF and MDL in the animal and plant kingdoms. “I’ve learned over the years that although the types of immune systems in plants and humans are really significantly different, there are some joint principles that have obviously developed over millions of years,” Bernhagen said.

Bernhagen moved to Ludwig Maximilians University in 2015, but their collaboration continued. Their most recent study, published in the Journal of Biological Chemistry, characterizes the biochemical and biological activity of MDL in Arabidopsis thaliana, a plant from the mustard family and Panstruga’s favorite experimental model system.

The paper begins with a simple question: Where are MDLs located? Most human chemokines are secreted from cells; however, MIFs can be found both inside and outside the cell. Bernhagen and Panstruga’s recent study shows that MDLs are inside cells. This is consistent with the hypothesis that MIF-like cytokines were originally intracellular proteins that evolved to gain secondary functions outside the cell.

Next, the research team deleted the genes coding for MDL from A. thaliana and exposed both mutant and wild-type plants to common pathogens. Mutant plants were more resistant than wild-type to bacterial infections. A targeted metabolite screening failed to identify a mechanistic explanation for this, a gap the researchers plan to address in future work.

The team plans to continue studying host immunity through characterization of MIF and MDL. “The mere comparison of plant protein structure and functions with human proteins — we call this structure-activity relationships — can tell us about which amino acids are important and inform design of drugs against the human protein,” Bernhagen said.

“We learned a lot from each other regarding possibilities and limitations of our experimental systems,” Panstruga said, “and how each can be used to address questions that are not so easy to address in the other system. For example, in plants we can easily generate transgenic lines; this would not be so straightforward in mice.”

The two are eager for the post-pandemic return to campus. “We started working together after a chance meeting at a student’s committee meeting,” Panstruga said. “These little chats are important idea generators in science,” Bernhagen said.