Ulcerative colitis, or UC, is a form of inflammatory bowel disease characterized by chronic and relapsing large intestine inflammation. Genetics account for only a minority of UC cases; hence, to develop treatments, researchers need to understand better the environmental contributions to this condition.

Gut microbes are in perpetual contact with the gastrointestinal tract, so they comprise important but poorly defined environmental variables contributing to UC development. Many studies have reported changes in gut microbiome composition in patients with UC compared to healthy individuals. While that suggests a potential role for gut microbes in UC pathogenesis, researchers have yet to pinpoint the causative microbes and associated bacterial proteins. 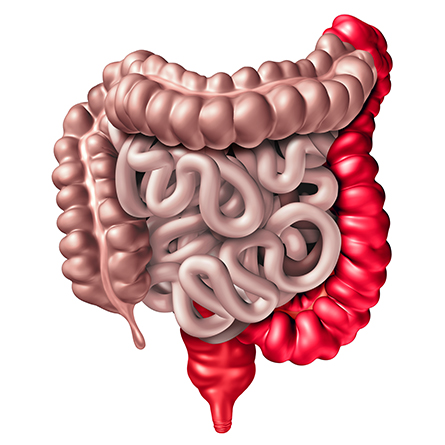 Dennis Wolan’s lab at Scripps Research is interested in identifying small-molecule activators and inhibiting bacterial enzymes involved in proliferation of human disease. Wolan said he was curious about what bacterial enzymes of the microbiome contribute to UC development.

“Many publications have focused on the role of the microbiome in both health and disease states,” he said. “Most of these were focused on the taxonomical and phylogenic differences in the microbiome. But what about the associated bacterial proteins? What proteins are these gut bacteria making in disease conditions, and how are these interacting with the human body?”

One protein of interest was serine proteases, a type of proteolytic enzyme that cleaves peptides at the serine amino acid. Researchers long have recognized that they coordinate many physiological processes and play key roles in regulating the inflammatory response. Previous studies have suggested increased proteolytic activity in microbial samples harvested from people with inflammatory disorders such as UC and Crohn’s disease.

Peter Thuy–Buon, a graduate student and later a postdoc in the Wolan lab, led a project to study differential protein expression in healthy and UC fecal samples. He and the team described the project in a recent paper in the journal Molecular & Cellular Proteomics. In addition to standard mass spectrometry, Thuy–Buon used a small molecular approach called affinity-based proteomic profiling to target and enrich for different types of proteases in the fecal samples.

“We showed that there were 176 discrete host and microbial protein groups differentially enriched between healthy and UC patients,” Wolan said. “Furthermore, further enrichment of these proteins showed significantly higher levels of serine proteases in UC patients.”

This finding has inspired exciting future research questions. For example, are elevated serine proteases the driver of UC or merely the effect of UC disease progression?

“There is a lot of exciting work to be done using these findings,” Wolan said. “Future molecular studies should focus on how serine proteases might be contributing to UC and whether their levels can be manipulated to modify disease progression.”

Functional proteomics has shown the potential role of serine proteases in UC. Future steps will include drug discovery and design of small-molecule regulators of bacterial enzymes.

Wolan said, “Ultimately, the moderation of microbiome distribution in UC via external small-molecule intervention can serve as a foundation for UC prevention and treatment.”