ASBMB Today Science The mechanism of the monkeypox antiviral
News

The molecule targets a multilayered quirk in the poxvirus life cycle

Since the World Health Organization announced a week ago that a traveler in the U.K. tested positive for monkeypox, cases have been reported in at least 12 countries where the virus is not usually found. 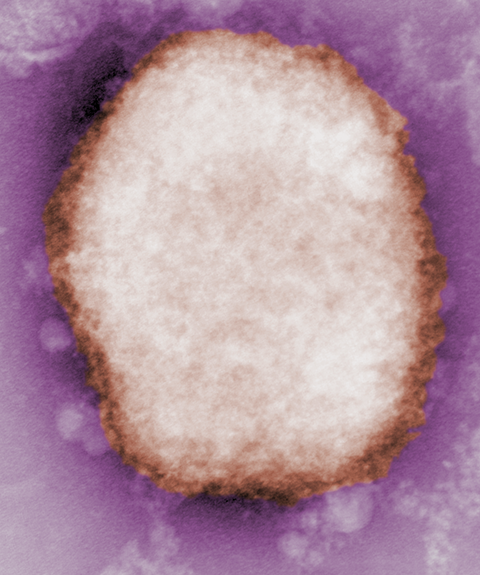 Charles D. Humphrey, Tiara Morehead & Russell Regnery/Centers for Disease Control and Prevention
This negative-stain transmission electron micrographic image shows a mulberry-type monkeypox virus particle that was found in human vesicular fluid. The surface of these M-type virions are covered with short, whorled filaments, while C-type, or capsular-type virions, are penetrated by stain and are seen as a sharply defined, dense core, surrounded by laminated zones of differing densities.

At the offices of SIGA Technologies, a health security company in the U.S. that produces an antiviral molecule recently approved in some countries to treat monkeypox, chief scientific officer Dennis Hruby said his team has been working “frantically” to respond to the outbreak.

Monkeypox is not a new virus. Nigeria, which has an ongoing outbreak, has reported more than 500 suspected cases since 2017, and in the Democratic Republic of Congo, the WHO estimated more than 2,700 people were infected with a more severe strain in 2021 alone.

However, the sudden detection of the virus in multiple countries where it is not endemic, among patients with no obvious connections to one another and no history of travel to places currently fighting outbreaks, suggests that there may be a transmission chain — either between people or from an animal reservoir — that health authorities don’t know about.

It’s too soon to say whether that is true in this outbreak. But, Hruby said, governments are acting fast to contain the virus.

“We’ve already been having conversations with a number of governments about stockpiling a drug for smallpox,” Hruby said. But the outbreak has ignited much more customer interest. (See box.)

SIGA Technologies makes one of two small molecules approved by the Food and Drug Administration, and recently approved in Europe, to treat smallpox. (Global rights to the other FDA-approved drug, a nucleotide analog optimized to block poxvirus polymerases, were bought last week by Emergent BioSolutions.)

SIGA’s flagship drug, identified through a high-throughput screen in 2005, has a somewhat unusual mechanism of action. Called tecovirimat, it targets a viral structural protein called the F13 homolog, alias p37, that enables a strange quirk of poxvirus biology. Exactly how the protein works remains a bit of a mystery.

A virus in a double wrapper

Poxviruses — there are dozens, including smallpox, monkeypox, rabbitpox and the recently-identified Alaskapox — have an unusual life cycle. Although they are DNA viruses, they avoid the host cell’s nucleus completely, conducting all of their genome replication, transcription, translation and new virus assembly in the host cell cytoplasm.

They also make two forms of infectious progeny, thanks to a curious cellular escape strategy. A mature, infectious pox virion, produced in a zone of the cytoplasm called the virus factory, has a viral protein capsid wrapped in a membrane stolen from its host. But before it leaves the cell, it accumulates two more layers of membrane packaging, then sheds one of them by fusion with the cellular membrane. That leaves the extracellular virus wrapped in a double layer of membrane.

Not every virion makes it through this process. University of Rochester virologist Brian Ward, who studies poxvirus replication, estimates that between 5% and 10% of intracellular mature virions eventually escape the cell in double-enveloped form. Infected cells generally don’t burst open, so the majority of the viral progeny they generate stays bound up inside — infectious, but sequestered.

In variola, the virus that causes smallpox, “a maximum of 10% of the virions that are made are enough to cause that disease,” Ward said. “If you had 20% — twice as many — it would be devastating.

“I think to some extent, the virus does want to limit how much of the virus gets out, to control its pathogenicity.”

Researchers know relatively little about how the second and third membranes, which seem to derive from the cell’s trans-Golgi network, become wrapped around the virus. There are two mechanistic possibilities, Ward said, but little experimental support for either. One thing scientists do know is that the F13 homolog protein is crucial for the wrapping process. (The F13 protein is found in vaccinia virus. Researchers working on other viruses agreed to call its homologs in other poxviruses “F13 homologs” when it became clear that developing a new system of protein nomenclature for every species of poxvirus was much too confusing.)

Anchored to the membrane by palmitoylation and perhaps by some phospholipase-related domains, F13 homologs are found between the inner and outer membrane layers of the extracellular virus.

Hruby studied F13 as an academic virologist, he said, before launching his biotech career. “If you’d asked me if (the gene that makes P37) was going to be a target for an antiviral, I would have not thought that was possible,” he said. “One of the advantages of blind high-throughput screening is you come out with hits that hit targets you never would have predicted.”

In 2005, Hruby and colleagues at SIGA published the results of a screen of more than 350,000 small molecules they had licensed from another company. After some tweaks and optimization, one of them, known as ST-246 and subsequently as tecovirimat, proved to be effective in halting the replication of cowpox virus, one of many less dangerous relatives of smallpox.

Virologists use cells grown in a monolayer and then stained with crystal violet to measure the disruptive potency of a virus. Just one cowpox virion per 100 cells can destroy a smooth blue lawn of cells almost completely, leaving only a few hardy tufts behind. In lower concentrations, the virus forms plaques that dapple the lawn with groups of dead cells. But in cells treated with ST-246, the screen showed, the highest dose of virus formed no plaques at all, a clue that the molecule blocks viral infection.

Further studies using a different virus showed that ST-246 didn't stop virions from assembling within the cell; treated and untreated cells contained about the same quantity of intracellular mature virions after infection. Instead, the molecule dramatically reduced the virus’s escape into the culture media. That gave the SIGA researchers the idea that ST-246 could alter a virus’s wrapping in its second and third membranes.

By growing many rounds of the cowpox virus in cells with a low concentration of the molecule, then mapping the mutations that lent resistance, they identified the F13 homolog as tecovirimat’s target. Later biochemical studies showed that the drug disrupted the interaction between F13 and two cellular proteins involved in trafficking, Rab9 and TIP47.

Without a clear understanding of the steps in viral wrapping, it is difficult to determine exactly why breaking up the Rab9-TIP47-F13 interaction is so effective.

It’s plausible that, after treatment, the F13 homolog fails to localize properly for envelopment, Ward said. “But there’s no real hard evidence for that. What we do know is that the drug works fantastically. They have saved people’s lives with this drug.”

Ward recalled, for example, the 2008 case of a 2-year-old boy who became seriously ill with vaccinia contracted after his father, a soldier, was vaccinated against smallpox. After more than a week in the hospital in worsening health, the child received both tecovirimat and a nucleotide analog and began to recover.

Presented with Ward’s assessment that the drug’s mechanism is uncertain, Hruby pushed back. “I think we know how the drug works. It keeps F13 from going to the membrane, and, by doing that, it keeps the virus from budding.” Still, he conceded, there are open questions for basic researchers to tackle. “What we don’t know is down at the molecular level… we know the region of the protein where it interacts, but the exact biochemical mechanism, no, we don’t.”

The close relationship between monkeypox and its deadlier cousin smallpox is a big part of why a stockpile of effective drugs to treat monkeypox exists — for residents of wealthier nations. 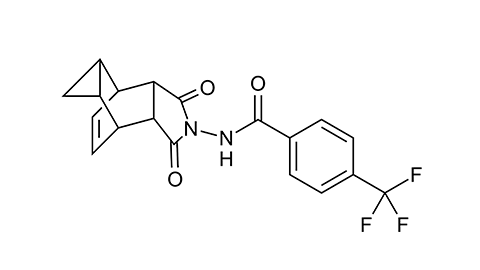 In the wake of the Sept. 11, 2001 terrorist attacks, the U.S. invested heavily in defense against bioterrorism. That included developing treatments for the virus that causes smallpox, which was eradicated in the 1980s but still exists in a few freezers around the world.

SIGA Technologies was one of the beneficiaries of that investment. Over the years, its funding has come from the National Institute of Allergy and Infectious Disease, which contributed slightly over $35 million to SIGA’s smallpox antiviral program from 2003 to 2010, and the Biomedical Advanced Research and Development Authority, or BARDA, biosecurity program, which agreed to contribute up to $435 million at the clinical testing stage.

In 2018, SIGA researchers reported in the New England Journal of Medicine that tecovirimat, which is branded as TPOXX, was safe for healthy humans to ingest.

It was impossible to test the drug in humans with smallpox; there is none. However, the company reported that it prevented death among rabbits and monkeys infected with an otherwise-lethal dose of rabbitpox or monkeypox viruses. Shortly thereafter, the FDA approved the drug to treat smallpox, and the U.S. and Canadian governments began to accumulate stockpiles.

SIGA declined to disclose the price it charges per 14-day course of treatment. The company has an agreement with Oxford University and the local health ministry to provide the drug free of charge to patients with monkeypox in the Central African Republic, and Hruby said that they intend to conduct clinical trials in other countries where the virus is endemic.

“Of course,” he added, “we didn’t anticipate having a pandemic to test the drug.”

From the journals: JBC
Anand Rao
Working with dangerous viruses sounds like trouble
Jerry Malayer
Unraveling the mysterious mutations that make delta the most transmissible COVID virus yet
Liz Szabo
Targeting 20,000 proteins by 2035
Laurel Oldach
A protein in your brain behaves like a virus
Yewande Pearse
COVID-19 vaccines focus on the spike protein, but there’s another target
Sarah L. Caddy