Understanding how could help save coral reefs 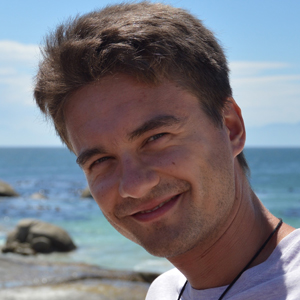 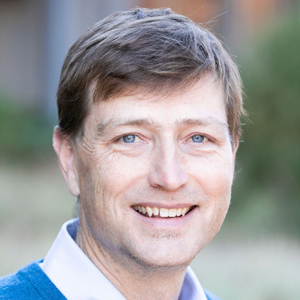 Sunscreen bottles are frequently labeled as “reef-friendly” and “coral-safe.” These claims generally mean that the lotions replaced oxybenzone — a chemical that can harm corals — with something else. But are these other chemicals really safer for reefs than oxybenzone?

This question led us, two environmental chemists, to team up with biologists who study sea anemones as a model for corals. Our goal was to uncover how sunscreen harms reefs so that we could better understand which components in sunscreens are really “coral-safe.”

In our new study, published in Science, we found that when corals and sea anemones absorb oxybenzone, their cells turn it into phototoxins, molecules that are harmless in the dark but become toxic under sunlight. 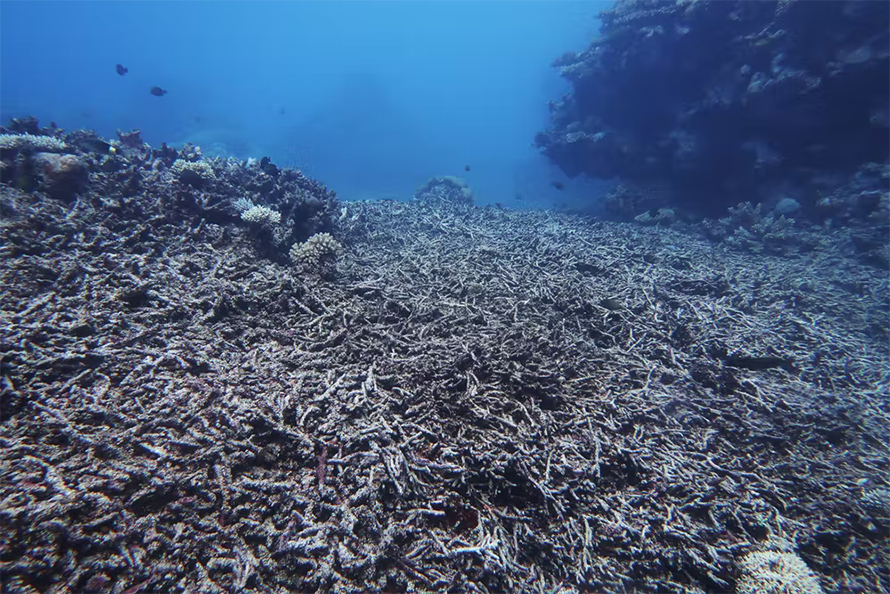 Amanda Tinoco, CC BY-ND
Reefs around the world — like the Great Barrier Reef seen here — are bleaching and dying because of stressors like increased water temperatures, and sunscreens may be exacerbating the issues.

Sunlight is made of many different wavelengths of light. Longer wavelengths — like visible light — are typically harmless. But light at shorter wavelengths — like ultraviolet light — can pass through the surface of skin and damage DNA and cells. Sunscreens, including oxybenzone, work by absorbing most of the UV light and converting it into heat. 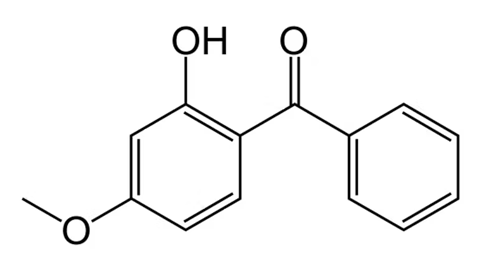 Fvasconcellos via WikimediaCommons
Oxybenzone is a common ingredient in many sunscreens.

Coral reefs around the world have suffered in recent decades from warming oceans and other stressors. Some scientists thought that sunscreens coming off of swimmers or from wastewater discharges could also be harming corals. They conducted lab experiments that showed that oxybenzone concentrations as low as 0.14 mg per liter of seawater can kill 50% of coral larvae in less than 24 hours. While most field samples typically have lower sunscreen concentrations, one popular snorkeling reef in the U.S. Virgin Islands had up to 1.4 mg oxybenzone per liter of seawater — more than 10 times the lethal dose for coral larvae.

Likely inspired by this research and a number of other studies showing damage to marine life, Hawaii’s legislators voted in 2018 to ban oxybenzone and another ingredient in sunscreens. Soon after, lawmakers in other places with coral reefs, like the Virgin Islands, Palau and Aruba, implemented their own bans.

There is still an open debate whether the concentrations of oxybenzone in the environment are high enough to damage reefs. But everyone agrees that these chemicals can cause harm under certain conditions, so understanding their mechanism is important. 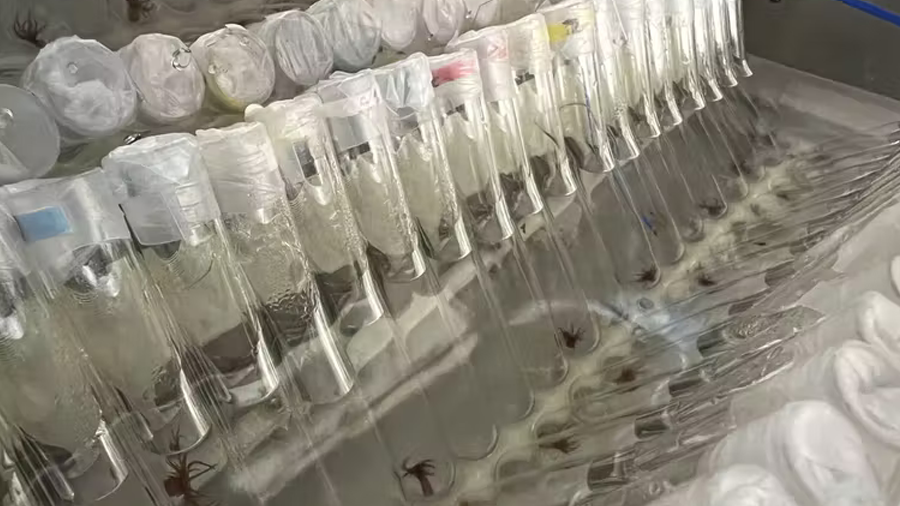 Djordje Vuckovic, CC BY-ND
By putting sea anemones into test tubes with oxybenzone and controlling what kinds of light they were exposed to, we could see whether the sunscreen was reacting to light.

While laboratory evidence had shown that sunscreen can harm corals, very little research had been done to understand how. Some studies suggested that oxybenzone mimics hormones, disrupting reproduction and development. But another theory that our team found particularly intriguing was the possibility that the sunscreen behaved as a light-activated toxin in corals.

To test this, we used the sea anemones our colleagues breed as a model for corals. Sea anemones and corals are closely related and share a lot of biological processes, including a symbiotic relationship with algae that live within them. It is extremely difficult to perform experiments with corals under lab conditions, so anemones are typically much better for lab-based studies like ours.

We put 21 anemones in test tubes full of seawater under a lightbulb that emits the full spectrum of sunlight. We covered five of the anemones with a box made of acrylic that blocks the exact wavelengths of UV light that oxybenzone normally absorbs and interacts with. Then we exposed all the anemones to 2 mg of oxybenzone per liter of seawater.

The anemones under the acrylic box were our “dark” samples and the ones outside of it our control “light” samples. Anemones, like corals, have a translucent surface, so if oxybenzone were acting as a phototoxin, the UV rays hitting the light group would trigger a chemical reaction and kill the animals — while the dark group would survive.

We ran the experiment for 21 days. On Day Six, the first anemone in the light group died. By Day 17, all of them had died. By comparison, none of the five anemones in the dark group died during the entire three weeks. 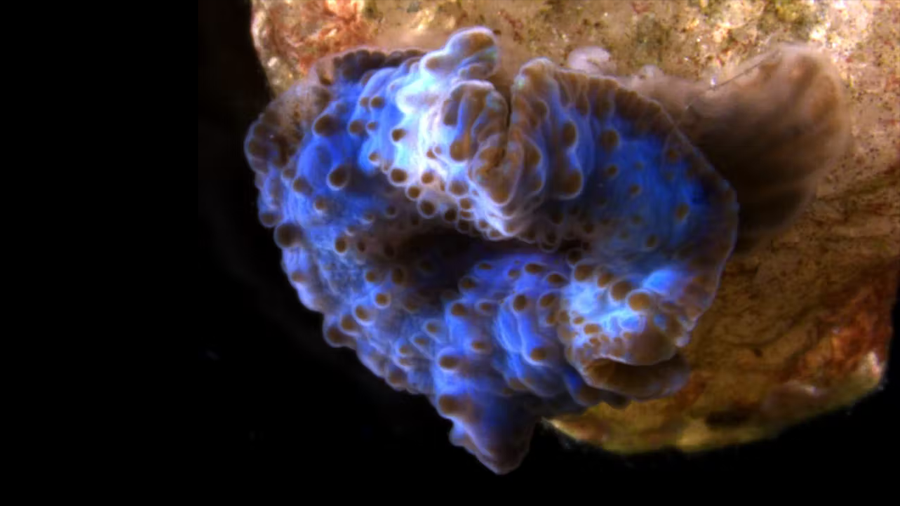 Christian Renicke, CC BY-ND
Corals — like the mushroom coral seen here — and sea anemones absorb oxybenzone and metabolize it, but in doing so, they turn it into a toxin.

We were surprised that a sunscreen was behaving as a phototoxin inside the anemones. We ran a chemical experiment on oxybenzone and confirmed that, on its own, it behaves as a sunscreen and not as a phototoxin. It’s only when the chemical was absorbed by anemones that it became dangerous under light.

Any time an organism absorbs a foreign substance, its cells try to get rid of the substance using various metabolic processes. Our experiments suggested that one of these processes was turning oxybenzone into a phototoxin.

To test this, we analyzed the chemicals that formed inside anemones after we exposed them to oxybenzone. We learned that our anemones had replaced part of oxybenzone’s chemical structure — a specific hydrogen atom on an alcohol group — with a sugar. Replacing hydrogen atoms on alcohol groups with sugars is something that plants and animals commonly do to make chemicals less toxic and more water soluble so they are easier to excrete.

Djordje Vuckovic, CC BY-ND
When cells try to process oxybenzone, they replace part of an alcohol group (highlighted in red on the left) with a sugar (in red on the right) and in doing so turn the sunscreen into a phototoxin.

But when you remove this alcohol group from oxybenzone, oxybenzone ceases to function as a sunscreen. Instead, it holds on to the energy it absorbs from UV light and kicks off a series of rapid chemical reactions that damage cells. Rather than turning the sunscreen into a harmless, easy-to-excrete molecule, the anemones convert oxybenzone into a potent, sunlight-activated toxin.

When we ran similar experiments with mushroom corals, we found something surprising. Even though corals are much more vulnerable to stressors than sea anemones, they did not die from oxybenzone and light exposure during our entire eight-day experiment. The coral made the same phototoxins from oxybenzone, but all of the toxins were stored in the symbiotic algae living in the coral. The algae seemed to absorb the phototoxic byproducts and, in doing so, likely protected their coral hosts.

We believe there are a few important takeaways from our effort to better understand how oxybenzone harms corals.

First, coral bleaching events — in which the corals expel their algal symbionts because of high seawater temperatures or other stressors — likely leave corals particularly vulnerable to the toxic effects of sunscreens.

Second, it’s possible that oxybenzone could also be dangerous to other species. In our study, we found that human cells can also turn oxybenzone into a potential phototoxin. If this happens inside the body, where no light can reach, it’s not an issue. But if this occurs in the skin, where light can create toxins, it could be a problem. Previous studies have suggested that oxybenzone could pose health risks to people, and some researchers have recently called for more research into its safety.

Finally, the chemicals used in many alternative “reef-safe” sunscreens contain the same alcohol group as oxybenzone — so could potentially also be converted to phototoxins.

We hope that, taken together, our results will lead to safer sunscreens and help inform efforts to protect reefs.

Djordje Vuckovic is a Ph.D. candidate in civil and environmental engineering at Stanford University.

Bill Mitch is a professor of civil and environmental engineering at Stanford University.