Finding sarcoidosis: A clinical game of hide and seek

How do I introduce a disease that camouflages as different ailments and the cause for which remains a mystery?

What started as a case of dermatological curiosity in 1869 is in modern times characterized as a rare, chronic, multisystemic inflammatory disorder. Sarcoidosis is a rare disease with numerous clinical presentations (signs and symptoms). Consequently, patients with sarcoidosis wind up in multiple specialty clinics across various medical disciplines.

As each patient is unique and affected by sarcoidosis in a different way, it also is called “the Snowflake Disease.”

On one side of the bench-to-bedside spectrum, researchers meticulously are trying to identify the cause and mechanism of sarcoidosis. On the other, clinicians are facing challenges in avoiding misdiagnosis, as the prevalence and presentation of sarcoidosis vary from patient to patient. 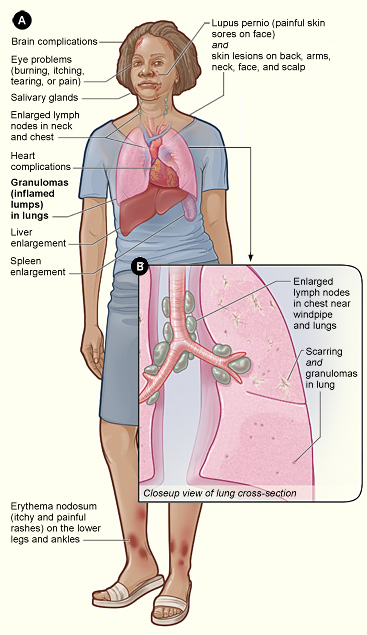 Sarcoidosis is a rare inflammatory disorder that develops when immune cells abnormally clump together to form red, swollen lumps called granulomas. If left untreated, the granulomas harden the tissues of the affected organs, a process often referred to as scarring or fibrosis, which impairs their proper functioning.

The onset of sarcoidosis can be sudden (acute) or gradual (chronic). And the cause remains a mystery.

According to the American Lung Association and the Foundation for Sarcoidosis Research, there are fewer than 200,000 cases per year in the United States.

The first clinical case of sarcoidosis, or sarcoid for short, can be traced back to January 1869 when John, a 58-year-old coal-wharf worker, visited Sir Jonathan Hutchinson at Blackfriars Hospital for Skin Diseases in London. Over two years, John had developed patches of purple symmetric skin plaques on his hands and legs, which Hutchinson described later as a “form of skin disease which has hitherto escaped special recognition.”

It was Sven Löfgren, a Swedish pulmonologist, who demystified sarcoidosis and brought it to public attention. In 1946, he described Löfgren’s syndrome, an acute type of sarcoidosis with clinical presentations including fever, bilateral hilar lymphadenopathy (swollen lymph nodes in the chest), arthritis, and erythema nodosum (inflammatory skin lesions with tender, red bumps). Most cases of Löfgren’s syndrome do not require treatment. However, some cases may be severe and last a long time.

Sarcoid mimics and challenges in diagnosis

Avrom Caplan is an assistant professor of dermatology and co-director of the sarcoidosis program at New York University Grossman School of Medicine. He talked to me about how sarcoid presents, its known triggers, and the the state of research and therapies today.

“In the United States, severe cases of sarcoidosis tend to present more commonly in the African-American patients. It tends to be less common in Asian countries and more common in Scandinavian countries. There is a lot of heterogeneity in the disease spectrum across patient populations,” Caplan said.

Many granulomatous diseases can mimic sarcoid, and the list is rather long. Some well-known sarcoid mimics include several bacterial and fungal infections, neoplasms, drug-induced granulomas, autoimmune diseases and cardiovascular diseases. For example, infectious granulomatous diseases such as tuberculosis, caused by Mycobacterium tuberculosis, have high prevalence rates in developing countries, allowing sarcoid to escape diagnosis. 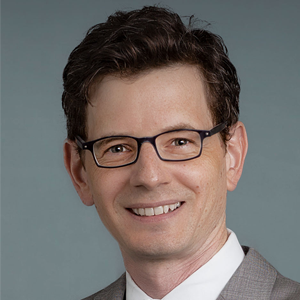 Caplan mentioned that, despite studies associating Mycobacterium (tuberculosis and nontuberculosis) and Cutibacterium acnes with sarcoid, sarcoid itself is characterized by noninfectious granulomas. Remnants of mycobacterial antigens have been detected in sarcoid granulomas. However, failure to culture Mycobacteria from granulomas associated with sarcoid refutes their potential role in the pathogenies of sarcoidosis.

Common sarcoid triggers are environmental exposures to insecticides, mold, mildew, beryllium, titanium and aluminum. Conditions such as chronic beryllium disease and hypersensitivity pneumonitis mimic sarcoid, but not all granulomas related to these exposures are sarcoid.

Identifying and ruling out sarcoidosis mimics is critical to avoid misdiagnosis and inaccurate treatment that can have grave consequences.

Sarcoid can occur in any organ, with the most common locations being the lungs, skin, lymph nodes and eyes. However, the brain, heart, kidneys and bones also can be affected. Tissue diagnosis is an integral method of identifying sarcoid in patients.

“Skin is sort of a window and marker to systemic diseases. The diagnostic procedure is not that challenging when sarcoid comes up on the skin. I do a skin biopsy, and skin biopsies are very low risk. It is easier than a pulmonary bronchoscopy, brain biopsy or cardiac bioscopy,” Caplan said. “Because sarcoid can look like many (or any) other skin conditions, it is important to have a trained dermatologist examine patients who have been diagnosed with sarcoidosis. It is vital to rule out other skin diseases that may present as sarcoidosis.”

He added that when a patient presents with skin sarcoid, the chances are that other organs are affected as well. 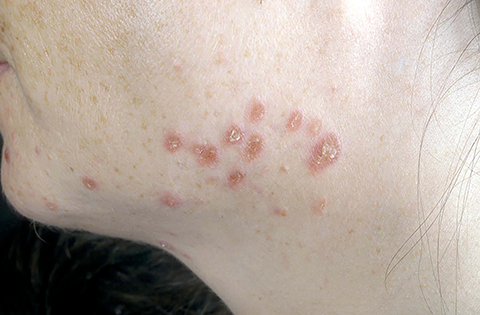 “A significant challenge associated with sarcoid is addressing the workup of sarcoid,” Caplan said. “For example, getting a tissue diagnosis to confirm sarcoidosis is not straightforward, especially when critical organs are involved. Extracutaneous sarcoidosis (sarcoid that does not affect the skin) can occur in the absence of skin involvement. However, skin sarcoid can be the first clue to systemic involvement, including sarcoidosis affecting the heart.”

Cardiac sarcoidosis is associated with sudden death, and timely diagnosis often is challenging without related clinical presentations. Cardiac sarcoidosis results when granulomas are deposited in the cardiac tissues, resulting in inflammation that causes dysfunction of the heart. When inflammatory granulomas occur in the heart’s electrical system, it results in tachy-brady (quick-slow) syndrome, the abnormal beating of the heart (also known as arrhythmia), and sudden death. 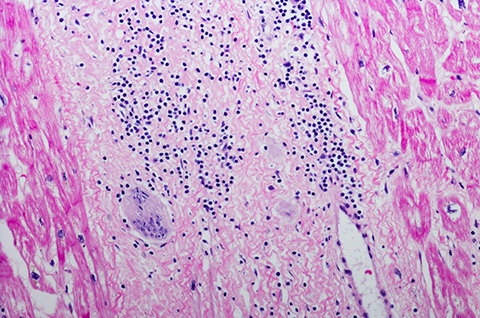 “It is critical to figure out if someone has cardiac sarcoid, but it’s not straightforward,” Caplan said. “I am not a cardiologist, but I can look at the skin and see if there are granulomas on the skin typical of sarcoid inflammation. This will allow me to order consults, electrocardiogram (EKG) and systemic workups.”

“On several occasions, individuals are diagnosed with sarcoidosis during a routine medical examination or in combination with other autoimmune diseases such as systemic lupus erythematosus, Crohn’s disease or psoriasis,” Caplan said.

He stressed the need to establish nationwide programs where multiorgan experts — such as pulmonologists, neurologists, cardiologists and dermatologists — work as a team to diagnose sarcoidosis, align treatment plans based on the clinical presentations and continue to advance sarcoid research.

“Currently, there is a need for large cohort studies to facilitate expert-level guidance to treat sarcoidosis. What is the exact molecular pathway? What can we target and treat? Is there something in a particular patient or patient population that we can target and treat to help them get better? These answers are key to helping patients do better and devising targeted therapies,” he said.

It is critical to understand the precise molecular events leading to the pathogenesis of sarcoid to design effective therapeutics.

Current disease management and treatment involve the use of immunosuppressants and drugs that reduce inflammation, such as corticosteroids, to prevent the formation of granuloma and fibroids.

Based on recent literature, T-cell receptor selection, activation and apoptosis and cytokine regulation are highly associated with the pathogenesis of sarcoidosis. Cytokines are signaling molecules secreted by several immune cells, such as innate macrophages and the adaptive T and B lymphocytes. Cytokines allow immune cells to communicate and are an integral part of the inflammatory process. The development of granulomas involves CD4+ T helper cells, which secrete interferon gamma and cytokines, such as interleukins 2 and 17. 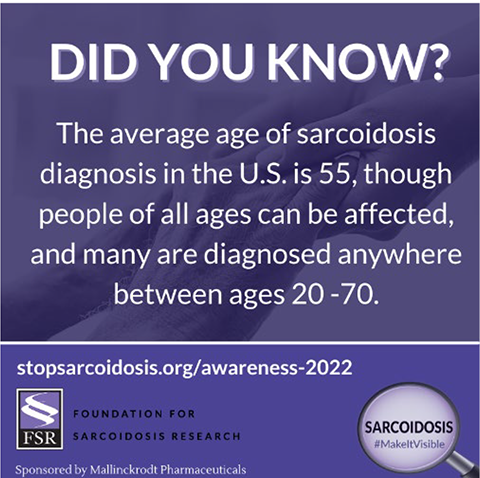 April is Sarcoidosis Awareness Month. The Foundation for Sarcoidosis Research (@StopSarcoidosis on Twitter) has been running a social media campaign (using the hashtag #MakeItVisible) all month to shine a light on the often invisible disease and support the sarcoidosis patient community.

Therefore, therapies that target the interactions between T cells and macrophages via cytokines are attractive candidates for sarcoid treatment. However, overlapping pathogenic signatures with other granulomatous conditions could complicate treatment.

JAK/STAT inhibitors: Cytokines help immune cells communicate by binding to specific receptors on the target cells. The Janus kinase/signal transducers and activators of transcription — or (JAK/STAT) — signaling pathway is a critical communication node to relay the cellular responses to cytokines. Therefore, drugs that target JAK proteins are in clinical trials for sarcoid treatment.

Ruxolitinib, tofacitinib, baracitinib and upadacitinib are four Food and Drug Administration–approved JAK inhibitors in use for diseases including acute graft-versus-host disease, rheumatoid arthritis, psoriatic arthritis and ulcerative colitis, to name a few.

A recent study published in the New England Journal of Medicine by a team of sarcoid experts from Yale School of Medicine showed that tofacitinib could be used to mitigate the symptoms of cutaneous sarcoidosis. However, its effect on pulmonary and other forms of sarcoid is not conclusive.

IL-17 inhibitors: The T helper 17 cells are a unique subset of CD4+ T cells characterized by the production of interleukin 17, proinflammatory cytokine and the primary effector of Th17 cells. Recent reports show high levels of soluble IL-17 in the bronchoalveolar lavage fluid of sarcoidosis patients with Löfgren’s syndrome compared with non-Löfgren’s patients. Given the importance of IL-17 in sarcoidosis, therapies that target IL-17 are attractive candidates for clinical trials.

Based on small case studies and case series, anti-IL-17 therapies have shown mixed results in sarcoidosis. In some cases, IL-17 inhibitors have been noted to flare or cause new cases of sarcoidosis. This paradoxical reaction is essential to note as treatments are developed, underscoring the significance of carefully planned clinical trials to avoid drug-induced sarcoidosis-like reactions.