By Laurel Oldach
April 27, 2021
If you’ve ever sampled Ethiopian cuisine, you’ve probably tasted teff. The cereal grain is the key ingredient of injera, Ethiopian flatbread, and a staple crop in the Horn of Africa. Researchers at Michigan State University are studying a closely related grass that is hardier, hoping to use its tricks to help teff survive severe drought.

Eragrostis nindensis is known as a resurrection plant: Even after a drought that would kill other grasses, and even if it has shriveled to a dead brown husk, it can rebound and sprout new green shoots when water becomes available. 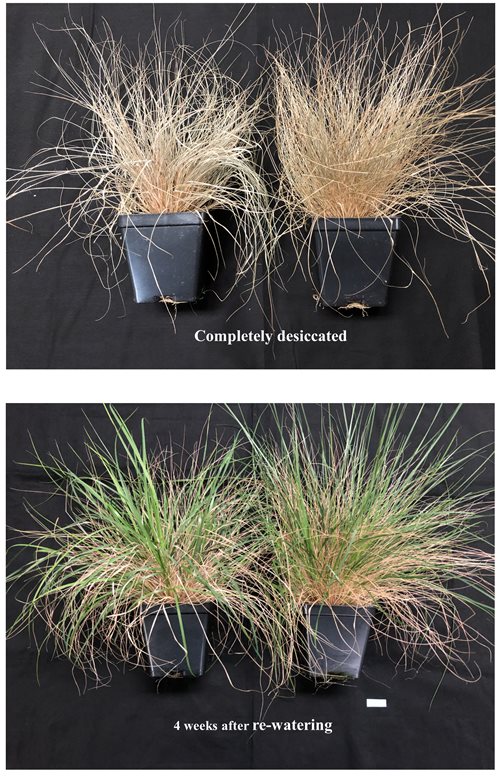 Kiran Shivaiah
Despite drying out completely during a simulated drought, a laboratory specimen of E. nindensis was able to recover and thrive after Kiran Shivaiah re-watered it.
When a lab down the hall began a genomic comparison of teff and E. nindensis, which belong to the same genus, Kiran Shivaiah, a research associate at the MSU Plant Resilience Institute, struck up a collaboration to study the resurrection plant’s physiology. He started by letting his study subject wither and keeping it that way for weeks.

“It was completely desiccated. Dead,” Shivaiah said. “Nobody thought it would come back. But I started watering and within four weeks … it came back to life.”

Like other researchers in Peter Lundquist’s lab, Shivaiah is interested in how plastoglobules, lipid droplets found in the chloroplast, mediate stress responses. He found that as nindensis stems dry, their plastoglobules increase in size. Nindensis is known to destroy its chlorophyll while drying out, to prevent photo-oxidation. Using lipidomics, Shivaiah observed that crash in chlorophyll level and an increase in smaller lipids and sugars, which he thinks are breakdown products. He suspects that some lipids are converted into sucrose, to stabilize proteins as drier conditions introduce osmotic stress. The adaptation also seems to involve reductions in the level of many plastoglobule proteins.

The findings are preliminary, Shivaiah said. After replicating them to solidify his conclusions about how the plastoglobule changes, he hopes to investigate what differentiates teff plastoglobules from those of E. nindensis.

“Teff is dessication-sensitive. It can tolerate water scarcity for a while, but not as long as E. nindensis,” he said. “Can we do genetic modification to the teff plant to make it as desiccation-tolerant as the nindensis plant?”

You can see Shivaiah's poster presentation here, as part of the Lipids and Membranes poster session, or join a discussion on Tuesday, April 27 at 3:15 p.m. EDT.