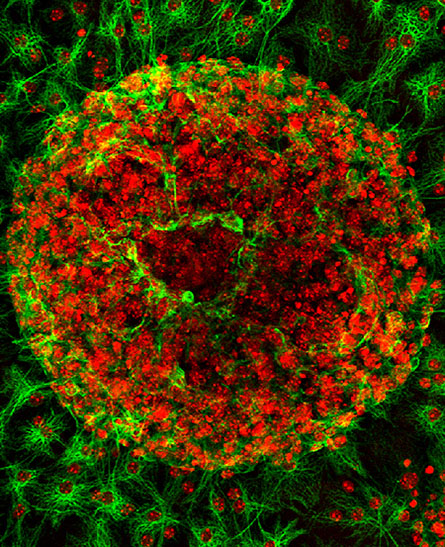 National Institute of Child Health and Human Development/NIH Flickr
Astrocytes (green), seen here in a mouse, are star-shaped cells in the brain and spinal cord.

Alexander disease, or AxD, is one in a group of an ultra-rare nervous disorders called leukodystrophies. In these disorders, sometimes called “white-matter diseases,” myelin — the white fatty insulating layer that surrounds the nerves and promotes the rapid transmission of nerve impulses — is destroyed. This hinders nerve impulses and nervous system functions. AxD also is characterized by abnormal protein aggregates called Rosenthal fibers within brain cells known as astrocytes. AxD is caused by gain-of-function mutations in the gene encoding glial fibrillary acidic protein, or GFAP.

To understand the disease at a molecular level, researchers use mice that have been altered genetically to mimic AxD symptoms. One such mouse contains a disease-causing heterozygous point mutation at R236H in mouse Gfap and a human transgenic GFAP, leading to increased levels of GFAP in astrocytes. In a recent study published in the journal Molecular & Cellular Proteomics, Michael R. Heaven of Vulcan Biosciences and a team from around the U.S. compared whole-brain proteomes of altered and unaltered mice and identified pathways and proteins that are differentially expressed in the AxD mice.

Using liquid chromatography with tandem mass spectrometry–based proteomics, the team found that two pathways, namely glutathione metabolism and the peroxisome proliferator-activated receptor, or PPAR, signaling pathway, are upregulated, suggesting a role in neuroprotection. They also noted that levels of UDP-galactose-ceramide galactosyltransferase, or Ugt8, a regulator of myelin membrane synthesis, were decreased and that mice that were altered genetically to remove Ugt8 shared phenotypic characteristics of the AxD mice. Lastly, a fatty acid binding protein that activates the NF-B inflammatory response and thereby decreases the neuroprotective effects of the PPAR pathway was upregulated in both AxD mice and human patients.

This study exemplifies the use of high-resolution mass spectrometry–based proteomics to investigate whole-brain tissue in animal disease models when it is not possible to obtain sufficient patient tissues.

Most cells cut their own proteins into fragments called immunopeptides and present these fragments to T cells — like evidence offered to a detective. The T cells determine if the evidence, the immunopeptides, are self or foreign and, if the latter, trigger an immune response to neutralize the threat. Cancer cells and infectious pathogens generate foreign immunopeptides that mark them for destruction and hence have great potential for highly specific therapeutic approaches. With the development of high-sensitivity mass spectrometry–based proteomics, scientists have discovered new cancer-specific antigens. However, standards to assess the quality of immunopeptidomic data generated by mass spec largely are falling behind the pace of discovery.

In a recent paper published in the journal Molecular & Cellular Proteomics, Kevin A. Kovalchik of CHU Sainte-Justine Research Center and a Canada-based team created the first user friendly quality control software tool, named MhcVizPipe, or MVP, that enables rapid and simultaneous assessment of large immunopeptidomic data sets. The authors showed that MVP, when compared to manual approaches, accelerates the analysis and data generation process about 22-fold on average. Thus, MVP serves as a great starting point for nonexperts to delve into immunopeptidomics and will foster greater accessibility and expansion of the field.

Matrigel — a necessary evil for organoids?

Researchers have been shifting recently toward growing and dividing cells in three-dimensional instead of two-dimensional cultures in petri dishes. These 3D cell cultures, called organoids, simulate microscopic and molecular features of original tissues. Hence, organoids are more clinically relevant and have tremendous therapeutic potential. Proteomic profiling of organoids could be valuable to test treatment regimens and find novel biomarkers.

Most organoids are grown in the solubilized basement membrane matrix Matrigel, which serves as a scaffold and provides mechanical properties and signaling cues for cell attachment and survival. However, Matrigel is complex and poorly defined, making it difficult to identify specific ingredients necessary for organoid function. Furthermore, thousands of identical peptides are shared between Matrigel and organoids, and insufficiently dissolved Matrigel could influence proteomic analysis of organoids.

In a recent article published in the journal Molecular & Cellular Proteomics, Man Wang, Huan Yu and colleagues at Peking University compared three Matrigel dissolving methods (cell recovery solution, dispase, and phosphate buffered saline–ethylenediaminetetraacetic acid buffer) and studied the effect of undissolved Matrigel proteins on proteomic profiles of organoids. They found that dispase digestion was the best method, with the highest peptide yield and highest incorporation ratio of stable isotopes. Further, 312 high-confidence Matrigel contaminants were identified, and they found that exclusion of the contaminants minimized Matrigel interference.