Developing tools to capture O-GlcNAc modifications. Discovering a new domain in ubiquitin binding. Exploring the unknown of a parasite’s lysosome. Read about papers on these topics recently published in the journal Molecular & Cellular Proteomics.

Exploring the unknown of a parasite’s lysosome

Trichomoniasis, one of the most common sexually transmitted diseases, is caused by a single-celled eukaryotic parasite called Trichomonas vaginalis. As a eukaryote, T. vaginalis has a degradative compartment called a lysosome, about which little is known. 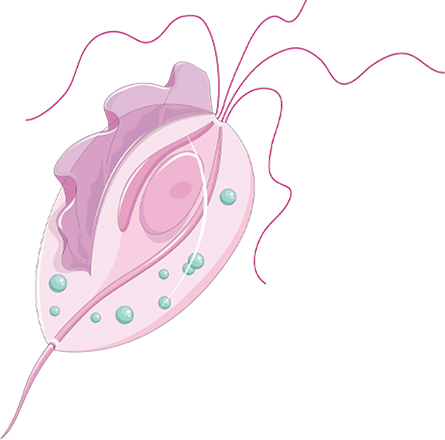 The parasite’s lysosome can fuse with transport compartments called phagosomes to form a phagolysosome that then degrades its internal contents. In a recent study published in the journal Molecular & Cellular Proteomics, Nadine Zimmann and colleagues from Charles University in the Czech Republic analyzed the phagolysosome of T. vaginalis to better understand its function.

The researchers identified 462 proteins located in the phagolysosome. Hydrolases, or enzymes that use water to cleave covalent bonds, were the most common type of protein found.

The team also observed proteins distantly related to receptors that recognize specific sugars known to direct proteins to the lysosome. But T. vaginalis doesn’t have any of the machinery necessary to make those specific sugars, called oligosaccharides. The researchers tested whether other oligosaccharide structures were involved in lysosomal targeting instead. They mutated part of a protein known to reside in the lysosome at sites that could attach oligosaccharides and found that the mutant protein could no longer be found in the lysosome. They also observed that by adding oligosaccharide attachment sites to a protein not found in the lysosome, the protein was targeted there. This makes T. vaginalis unique, as most other eukaryotic parasites don’t use sugars for lysosomal targeting.

Zimmann and colleagues also inhibited the lysosome and found that enzymes important for infection, such as the TvCP2 enzyme, which breaks down proteins, were secreted via the lysosome instead of the traditional secretory pathway.

This work yields a better understanding of how T. vaginalis uses its lysosome, including the secretion of enzymes involved in pathogenesis, which could provide a future therapeutic target.

The many roles of proteins are made more complex by posttranslational modifications, or PTMs, the chemical changes to proteins that are introduced by enzymes such as transferases, ligases and kinases.

The sugar N-acetylglucosamine can be attached to specific protein sites to yield a PTM abbreviated O-GlcNAc. This modification is implicated in various biological processes and diseases, yet our understanding of it has been limited. In a new study published in Molecular & Cellular Proteomics, Rajan Burt at the Broad Institute and a team of researchers describe how they developed a technique to study O-GlcNAc modifications.

The researchers modified a traditional approach to protein identification to enrich for O-GlcNAc modifications. Proteins from cells or tissues were cut up into fragments called peptides, which then were combined with an antibody mix that specifically binds to peptides with O-GlcNAc modifications and separates them from nonmodified peptides.

The team used mass spectrometry to identify the proteins and sites with modifications. They applied their technique to synaptic terminals from mouse neurons and identified over 1,300 O-GlcNAc-modified peptides with more than 1,000 modification sites.

This research provides an experimental strategy to map O-GlcNAc modification sites across the proteome, allowing scientists to understand better the diverse functions of this PTM.

A new domain in ubiquitin binding

Ubiquitin is a small protein that can be attached to other proteins as a post-translational modification through a process called ubiquitylation. Ubiquitylation has diverse signaling functions that are influenced by the length and type of ubiquitin chains.

Proteins with regions called ubiquitin-binding domains that specifically recognize and bind ubiquitin chains are central to signaling, yet researchers know little about their characteristics. In a new paper in the journal Molecular & Cellular Proteomics, Mark Villamil, Weidi Xiao and colleagues from the University of California, Irvine identify a ubiquitin interacting motif-like, or UIML, domain and describe its specific binding.

The researchers used biolayer interferometry, pull-down assays, and mass spectrometry to determine that the UIML domain in the yeast transcription factor Met4 specifically binds to K48-linked ubiquitin chains, which are the most abundant chain type. They then designed a probe to mimic the binding and tested its ability to specifically bind to K48-linked polyubiquitin chains on proteins in yeast and mammalian cells. The probe worked, helping the researchers identify proteins with this specific modification.

These results further our understanding of ubiquitin signaling and provide a new reagent to study ubiquitylation across the proteome.