We offer summaries of a selection of papers recently published in the Journal of Lipid Research. Topics include the role of HDL and Smo in inhibiting beta-cell apoptosis, lipid asymmetry in a plasma membrane and apolipoproteins and dementia risk.

HDL and Smo play a role in inhibiting beta-cell apoptosis

About 32 million Americans have Type 2 diabetes, meaning their bodies either don’t produce enough insulin or resist insulin. Researchers believe that due to endoplasmic reticulum stress, these patients lose the pancreatic beta cells that synthesize insulin. 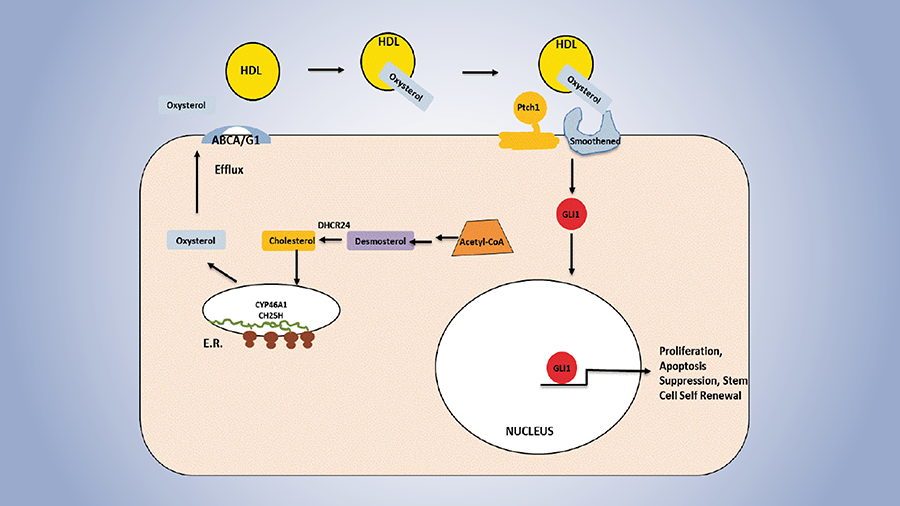 Studies in humans and in animal models have shown that high-density lipoprotein, or HDL, reduces the risk of diabetes by decreasing ER stress and beta-cell apoptosis. Researchers also have found that the hedgehog signaling pathway and cholesterol are involved in the fate of pancreatic beta cells and insulin production.

Mustafa Yalcinkaya and colleagues at the University Hospital of Zurich, Switzerland, published a paper in the Journal of Lipid Research on the mechanism by which HDL and the hedgehog signaling molecule Smoothened, or Smo, reduce beta-cell apoptosis induced by ER stress. They treated rat insulinoma beta cells with the ER stress inducer thapsigargin in the presence or absence of native HDL or CSL-111 (an artificially reconstituted HDL). Apoptosis studies such as free nucleosome assay and Caspase-3 activity assay showed that both HDL and CSL-111 reduced apoptosis in these cells.

Similar experiments involving the knockdown of oxysterol-producing enzyme cytochrome P450 and cholesterol transporter ABCG1 increased the thapsigargin-triggered apoptosis, indicating that oxysterols and their transport by ABCG1 increased the anti-apoptotic activity of HDL. Cholesterol and oxysterols are known to regulate the activity of Smo, which translocates the transcription factor GLI1 into the nucleus. Experiments with oxysterol showed increased nuclear GLI1, indicating Smo activation by oxysterol in the presence of HDL.

The research shows that oxysterol mobilized by HDL activates Smo and later reduces apoptosis. This work is promising; the researchers plan to conduct experiments imitating the physiological environment in primary cells for a more in-depth knowledge of the process.

Lipid asymmetry in a plasma membrane

The plasma membrane in eukaryotic cells is a lipid bilayer of lipids and proteins. The lipid content of this bilayer varies between the outer leaflet that faces the extracellular environment and the inner leaflet, which faces the cytoplasm. This asymmetry in the lipid distribution across the plasma membrane helps to regulate important biological processes such as apoptosis and signaling in immune cells. Scientists have tried to develop models to study it but have been unable to re-create the complex cellular environment. A more thorough methodology was needed.

Anjali Gupta and a team led by Thorsten Wohland from the National University of Singapore used two imaging systems — fluorescence lifetime imaging microscopy and imaging total internal reflection fluorescence correlation spectroscopy — to do a spatiotemporal study of the asymmetric distribution of lipids across the plasma membrane in live mammalian cells. This study was published in the Journal of Lipid Research. Their neat methodology demonstrated the varying lipid distribution by using fluorescent analogues of membrane lipids such as phosphatidylcholine, sphingomyelin and phosphatidylserine, and it also showed that the distribution depends on the cell line.

Are apolipoproteins a key to dementia risk?

Alzheimer’s disease and its related dementia are major neurological disorders, with about 44 million patients worldwide. An affordable diagnostic biomarker is needed that can identify easily the onset of these conditions in high-risk individuals. Recent studies have indicated the association of some subfractions of high-density lipoproteins, or HDL, with dementia. Researchers are looking into the relation of these subfractions, such as  apolipoproteins found in HDL particles including apoA1, apoC3 and apoJ, with dementia and whether they might be potential biomarkers.

Manja Koch and colleagues at the Harvard T.H. Chan School of Public Health studied the association of HDL and its apolipoprotein subspecies in a group of 1,351 elderly men and women. Their findings recently were published in the Journal of Lipid Research. They found that the total concentrations of apoA1 and some of the other apolipoprotein subspecies were not related to dementia risk, so these apolipoproteins would not be effective biomarkers for risk of dementia. However, they did find that a high concentration of apoC3 related to a lower risk of dementia. The researchers plan future investigations supported with brain imaging studies in a younger population to understand better how apolipoprotein concentration relates to Alzheimer’s and dementia.