Bacterial virulence is the extent to which a pathogenic microbe can cause disease. Genetic virulence factors in bacteria aid in host invasion, disease progression and evasion of host defenses. Staphylococcus aureus is one bacterium that has become increasingly difficult to treat with antibiotics due to the onset of resistant strains such as methicillin-resistant S. aureus, or MRSA. 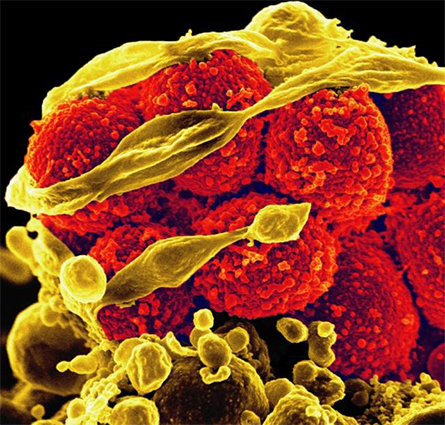 In a recent paper in the journal Molecular & Cellular Proteomics, Nadine Prust and colleagues at Utrecht University in the Netherlands describe how they improved protein preparation and quantitative detection methods to identify novel targets of protein phosphorylation in S. aureus. The expression of virulence factors in this bacterium is triggered by extracellular cues that set off intracellular signaling cascades; phosphorylation at serine/threonine kinase residues regulates this process.

Researchers believe that Stk1, one of two eukaryoticlike serine/threonine kinases expressed in S. aureus, calibrates genetic responses to extracellular stimuli via phosphorylation at serine/threonine residues. Alternately, Stp1 removes these phosphates. To determine potential targets of Stk1 and Stp1, Prust and colleagues designed a protein purification protocol that accounted for differences in Gram-positive bacteria, whose thick cell walls can increase contaminants from phospholipids, RNA and DNA. Next, using label-free protein detection designed to isolate and identify phosphorylated amino acids, Prust and colleagues identified 74 potential Stk1/Stp1-related phosphosites in S. aureus. By profiling Stk1/Stp1-deficient MRSA mutants, they were able to generate the most comprehensive S. aureus phosphoproteome to date.

These findings demonstrate that bacterial pathogens such as S. aureus use serine/threonine signaling more than researchers previously thought. By elucidating the role that serine/threonine kinases play in the expression of genetic factors like virulence, researchers can learn more about the causes of antibiotic resistance.

Chronic kidney disease, or CKD, is characterized by the progressive loss of kidney function and often leads to end-stage kidney failure, which can be treated only by transplant or dialysis. Protein-based approaches to predict progression of CKD have focused primarily on urinary proteins, which demonstrate overall kidney failure; however, urinary proteins don't accurately reflect the diversity of tissue damage in CKD.

Ji Eun Kim and colleagues at Seoul National University sought to identify key proteins expressed at the onset of kidney damage, such as those linked to inflammation and fibrosis in CKD. In a recent study published in the journal Molecular & Cellular Proteomics, Kim and colleagues assessed protein profiles of cultured renal cells and kidney tissue in rats as well as urine samples taken from CKD patients. Using label-free and tag-based protein detection methods, this team was able to identify the expression of specific proteins associated with various stages of kidney damage.

This study is the first to use multi-sample protein-based methods to detect key kidney damage proteins and provides a starting point for understanding the functional relevance and future use of these proteins in CKD detection and progression.

In a recent study in the journal Molecular & Cellular Proteomics, Kyle Swovick and colleagues at the University of Rochester in collaboration with researchers from the Wise Lab at the University of Louisville sought to understand the connections among protein turnover, aging and cellular energetic demands across organisms. Among the cells studied were valuable and difficult-to-obtain cell lines from whales, provided by Native American scientists at the North Slope Borough office of the Department of Wildlife Management in Barrow, Alaska. The team isolated the same cell type from organisms with varying life spans and evaluated the rates of protein turnover, energy consumption and cellular stress using liquid chromatography coupled with tandem mass spectrometry.

This study showed that despite having slower rates of protein turnover, some long-lived organisms were able to tolerate protein folding and stress more effectively than those with short life spans. Further understanding of protein synthesis and degradation across species of varied life spans could help researchers develop potential treatments for age-related disease.