“I want you to get to know me. This is my life. Progeria is part of it. It’s not a major part of it.”

That is how then-15-year-old Sam Berns introduced the 2013 Oscar-nominated HBO documentary “Life According to Sam.”

The film aimed to increase awareness of Hutchinson–Gilford progeria syndrome, a rare, fatal genetic disease that causes premature aging. It chronicles the inspiring journey of hope and resilience taken by Sam and his parents. It also documents the science and advocacy that ultimately resulted in the first FDA-approved treatment for progeria, which was approved late last year. 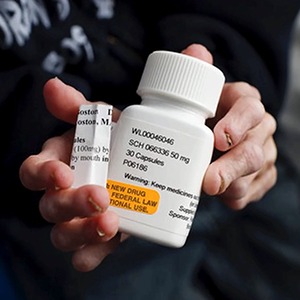 Aaron Vincent Elkaim | Courtesy of The Progeria Foundation
Lonafarnib is the first drug approved by the Food and Drug Administration to treat the rare disease progeria.

On Nov. 20, the Food and Drug Administration approved lonafarnib, which goes by the brand name Zokinvy. In trials, lonafarnib, a farnesyltransferase inhibitor, increased progeria patients’ lifespans by an average of 2.5 years.

“This is encouraging, as it sets a standard of care for progeria patients while we and other progeria researchers explore even better therapeutics leading to the cure,” said Mike Erdos, a staff scientist at the National Institutes of Health’s National Human Genome Research Institute.

The genetics and biochemistry

Infants born with progeria seem healthy at first. But they start aging at a pace 10 times faster than normal. Before age 1, weight gain slows, hair starts thinning and then falls out completely, joints may stiffen, and bones weaken. With time, blood vessels clog and connective tissue hardens. Many patients die of heart attack or stroke before they reach the age of 15.

The Progeria Research Foundation International Patient Registry currently identifies 131 children living with progeria worldwide. The foundation estimates that there may be as many as 250 patients around the world who still are undiagnosed.

Progeria is caused by the accumulation of progerin, an abnormally truncated form of the lamin A protein. A single mutation in the LMNA gene activates a rarely used alternative splice site, resulting in deletion of a chunk of the protein (50 amino acids, to be precise). The mutation is autosomal dominant; however, it is not found in the parents and likely arises spontaneously in a germ cell.

Lamin A is one of the key structural proteins that form the strong lipid and protein framework that holds the nuclear membrane of each cell nucleus together. Normally, lamin A undergoes post-translational modification, whereby it is first farnesylated and carboxymethylated, followed by enzymatic cleavage of the terminal 50 amino acids, including the farnesyl group. 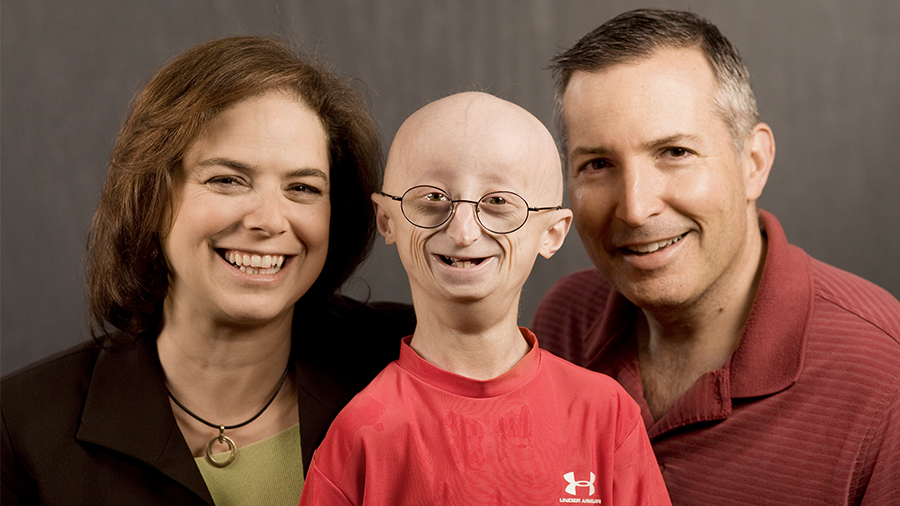 Sean Fine | Courtesy of The Progeria Foundation
Leslie Gordon and Scott Berns co-founded the Progeria Research Foundation after their son, Sam, was diagnosed with progeria. Sam shared what life is like with progeria in the HBO documentary “Life According to Sam.” He died of complications of the disease at the age of 17 in 2014.

Dr. Leslie Gordon is a pediatric researcher at Brown University and a physician at Boston Children’s Hospital. Perhaps her most important credential: She is the mother of Sam Berns.

“When Sam was diagnosed, we dropped everything and tried to find resources. What we found was discouraging,” Gordon said. “We didn’t know the cause, the mutation. There was minimal research, no funding, no treatments, and families like us had no place to go for information.”

Gordon established The Progeria Research Foundation with her husband, Dr. Scott Berns, also a pediatric physician, in 1999, just a year after their son’s diagnosis, to fill this gap. 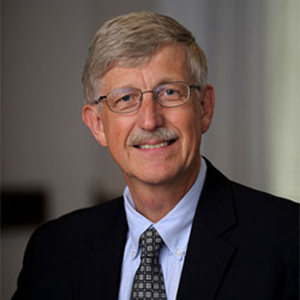 The foundation set up an international patient registry, established a cell and tissue bank to provide research materials, started a research-funding program, and created a progeria research consortium made up of scientists from around the world. One of the experts who joined the consortium was National Institutes of Health physician and geneticist Francis S. Collins.

From 1993 to 2008, Collins served as a director of the NHGRI. During that time, he oversaw the Human Genome Project, which culminated in the sequencing of the human genome in 2003.

That’s the same year that Collins’ research team, Leslie Gordon and other collaborators published the paper that described the genetic basis of progeria for the first time — they identified the cryptic splice site in the LMNA gene as causing progeria. The collaborators went on to generate a transgenic mouse model expressing the human progerin gene. The mouse model successfully replicates the cardiovascular defects and other features of the disease.

“We didn’t have any idea that finding the gene mutation would do what it’s done for us, but we knew it was very, very important,” Gordon told PLOS Blogs in 2012.

Gordon set out to facilitate collaborations and spearheaded the start of a progeria natural history study at Boston Children’s Hospital to understand better the progression of the disease in these children, which eventually would lead to interventional clinical trials to test promising drugs to treat progeria.

As the farnesyl group in progerin is the predominant toxic ingredient, researchers zeroed in on treatments to block progerin farnesylation to prevent its attachment to the nuclear membrane. The drugs first were shown to work in cultured cells. Then Collins’ mouse model proved to be a vital tool to demonstrate their efficacy: The mice’s symptoms improved after treatment with certain farnesyl transferase inhibitors.

Serendipitously, researchers at Schering–Plough, now Merck, had been working for a decade with farnesyltransferase inhibitors as a potential treatment for childhood brain cancer, and the company supplied lonafarnib at no cost during clinical trials for progeria starting in 2007. “We got lucky because there was 10 years’ worth of pharmaceutical research into developing a drug that we asked to be moved over into the field of progeria,” Gordon told National Public Radio in 2012.

Later, Eiger, a small biopharmaceutical company, reached out to Merck about adapting lonafarnib to treat hepatitis delta virus infection, another serious rare disease. Eiger then began a collaboration with the Progeria Research Foundation in 2018.

Leslie Gordon, who serves as medical director of the foundation, said that 2011 results showing that lonafarnib had a dramatic improvement on patients’ arterial pulse wave velocity, a predictor for cardiovascular risk, were a tipping point. She was the lead author on that paper in the journal Proceedings of the National Academy of Sciences.

Her son was one of the first children with progeria to receive the drug.

“This is a story that will be an example of genetic disease in many, if not all, human genetics courses in school,” Erdos at the NHGRI said.

While lonafarnib relieves progeria’s cardiovascular symptoms and extends lifespan by almost 20%, it doesn’t alleviate other symptoms, such as lack of subcutaneous fat, hair loss, stunted growth and joint contractures.

Researchers pursuing second-generation drugs have a few avenues: small-molecule inhibitors that target progerin, RNA therapeutics that prevent the production of progerin, and genome editing to fix the mutation at the DNA level.

The development of the first treatment for progeria highlights the importance of basic research, collaboration between scientists and clinicians and, above all, the close involvement of patient-advocacy groups.

Gordon underscored that the pace of research, for rare diseases and everything else, is increasing rapidly. “Technology has advanced leaps and bounds in the last 20 years,” she said. “What we could achieve in months and years is now possible within weeks.”