Like most new parents, Prasanna and Sharada Shirol were over the moon when their daughter Nidhi was born in 1999. Their firstborn and ultimately only child, Nidhi was the center of their attention. But they soon grew concerned.

“After four months, we observed that she had problems with digestion and suffered from frequent pneumonia,” Prasanna Shirol, a business owner in the Indian state of Karnataka, said. “Even after one and a half years, she could not get up on her own, had flat feet and other motor problems.”

He and his wife consulted several doctors across the country, but they could not pinpoint the cause, and genetic testing was not available widely in India at the time. To their dismay, all that the doctors could conclude was that their daughter’s condition was progressive “and she may collapse any moment,” he said.

Finally, at the age of 7, Nidhi was diagnosed with Pompe disease. 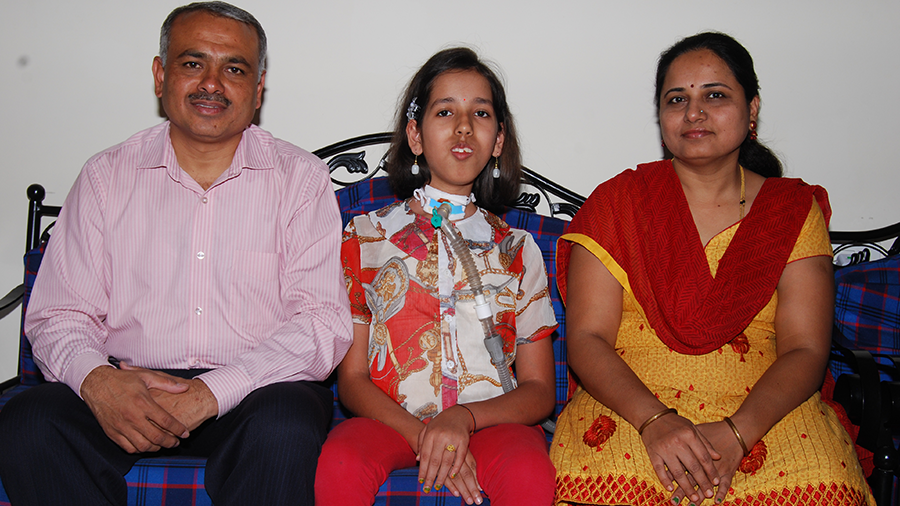 Courtesy of Prasanna Shirol
Prasanna and Sharada Shirol learned that their daughter, Nidhi, has Pompe disease when she was 7 years old. Prasanna, a business owner in the Indian state of Karnataka, since then has dedicated all of his free time to advocating for patients with rare diseases.

Pompe disease is a lysosomal storage disease. It is an autosomal recessive genetic disorder — meaning one gene is inherited from each parent — caused by loss-of-function mutations in the GAA gene, which encodes the lysosomal enzyme acid alpha-glucosidase, the only enzyme responsible for breaking down glycogen to glucose in the muscles. Deficiency of this enzyme leads to glycogen buildup in the muscles, causing them to distort. The disease also affects the liver, heart and respiratory system.

There are three types of Pompe’s disease: The classic infantile type occurs within a few months after birth, the nonclassic infantile type occurs around the first year, and late onset can occur in the teen years or even adulthood. In all cases, clinical manifestations include respiratory issues, enlarged heart, weak muscles and delayed motor skills.

Occurrence of the disease varies within ethnic groups and geographical regions. In the United States and the Netherlands, one in 40,000 people is affected by the disease. In Australia, the incidence rate is one in 145,000 people.

Enzyme-replacement therapy is the only available treatment for Pompe disease.

The drug, which reduced cardiomyopathy and extended ventilator-free survival for up to 36 months, earned FDA approval for treating infantile Pompe disease in 2006, around the time that Nidhi was diagnosed. The trial’s results were published in 2007 in the journal Neurology.

Sold under the brand name Myozyme by Genzyme Corp., the enzyme-replacement therapy was not available in India at the time.

“I connected with the International Pompe Association in the Netherlands, who then connected me to Priya Kishnani of Duke University, who helped to get Nidhi into the (drug maker’s) international charitable access program,” Shirol said.

In 2008, Nidhi’s treatment began, and she was infused with Myozyme once every two weeks. Her condition began to improve over time, though she still required a ventilator because her respiratory system had already weakened over the years because of the disease progression.

The next year, she was well enough to go to school.

“However, due to her body’s weakness, she developed scoliosis, which restricted her motor skills, and she needed further surgeries,” Shirol said. “Despite all this, she was really good in her studies. She scored 95% in her final board examinations and went on to go to college.”

In 2010, Genzyme won FDA approval for a new enzyme-replacement therapy, Lumizyme, for patients with late-onset disease.

This was true for Nidhi as well, her father said.

Though Nidhi was getting her therapy for free, Shirol was greatly concerned about the cost of the drug she was on, which increases as patients grow. At the time, the cost of treatment was around $55,000 per year for a patient weighing 10 kilograms (22 pounds).

“This bothered me,” he said. “What if the company stops giving the drug for free and starts charging us for the treatment? What if I lose my job? What about families who are going through the same struggle but are not that well-to-do?”

In 2009, he started the Pompe Foundation to raise money for families affected by Pompe disease. He connected with doctors around the country and soon learned that there were only a couple of Pompe patients in India.

One doctor advised Shirol to expand his organization to include other lysosomal storage disorders, so in 2010, Shirol co-founded the Lysosomal Storage Disease Society and went on to conduct India’s first Rare Disease Day.

In 2013, he co-founded the Organization for Rare Diseases in India. The ORDI provides a 24/7 helpline and a holistic management platform for rare disease patients — from diagnosis to treatments and then to follow-ups through the Rare Disease Care Coordination Centre.

The organization’s advocacy efforts have been profound.

It has engaged in litigation on behalf of rare disease patients.

It convinced the state government of Karnataka to provide funding to treat more than 40 patients with lysosomal storage disorders.

And, in 2015, it started the Race for 7 run/walkathon. The number seven was chosen because there are about 7,000 known rare diseases.

“In 2020, we had almost 10,000 people participating in the event, including celebrities and politicians,” Shirol said.

All told, the organization has served more than 3,000 patients, of whom around 160 were Pompe disease patients. Sadly, most have died, Shirol said. 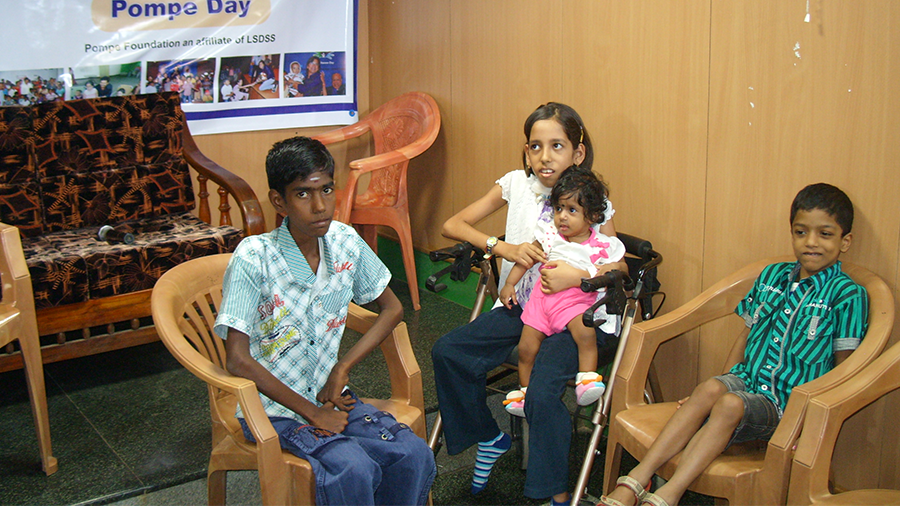 Courtesy of Prasanna Shirol
Nidhi Shirol, center, began receiving an enzyme-replacement therapy in 2008. Soon she was well enough to begin college, though she still needed a respirator. Breathing problems, along with muscle weakness and heart complications, are common in Pompe disease patients.

While Shirol was doing everything he could to raise national awareness and make resources available to families affected by rare diseases, Nidhi was enjoying her college education and enthusiastically supporting her father with his campaigns. But in 2017, tragedy stuck.

“While she was attending a college event, her ventilator switched off, and before it could be restarted, she suffered a massive cardiac arrest,” Shirol said. “She eventually went into a semi-coma state and has been as such since.”

Looking into the future

These days, researchers studying Pompe disease have their sights set on gene therapy.

In 2017, researchers reported achieving liver-specific delivery of a GAA transgene using an adeno-associated virus vector in mouse and monkey models.

In 2019, Amicus Therapeutics won a breakthrough therapy designation for late-onset Pompe disease from the FDA for their drug called AT-GAA. The novel therapy involves administering recombinant human GAA enzyme with a small pharmacological chaperone to help protect and increase the activity of the GAA.

“We expect gene therapy to come to India also,” Shirol said, adding that genetic diagnosis has become more widespread. The country now has more than 26 labs performing genetic testing, which is still very few compared to other nations, and whole exome sequencing costs about $270.

“With the financial status of Indians, even that becomes taxing. But the good news is that Genzyme and the Indian Council of Medical Research are offering a free testing for lysosomal-storage diseases,” he said, adding that this development underscores how impactful patient resource groups can be.

Going forward, Shirol is all the more determined to help the rare disease community at large by focusing his efforts on clinical trials and research and bringing in more stakeholders in those areas, because ultimately those are going to drive therapeutic improvement.

He also stressed the need for a strong rare-disease policy by the government to ensure early diagnosis, treatment and lifelong support for patients as needed.

One thing that bothers him is that there is no patient registry for rare diseases in India, which, combined with a lack of research infrastructure, poses challenges to research and development initiatives on such diseases and “creates a big gap between the patient’s expectations and the development of new drugs,” he said.

He said he’s willing to serve as a liaison between researchers, doctors, patient groups and stakeholders and that his team is developing a digital patient registry platform to help steer research and therapeutics in the right direction.

Shirol said he has given his life to the cause and will continue to advocate for better therapy for rare diseases, “because it is not just about my daughter — it’s about all the families affected by such diseases.”