Robert Lickely Post (Robin to all who knew him) passed away on Jan. 26 following a long illness. The fields of physiology and membrane biology lost a pioneer who laid much of the groundwork for our understanding of the way cells maintain their ionic composition through the action of a family of proteins called ion pumps. 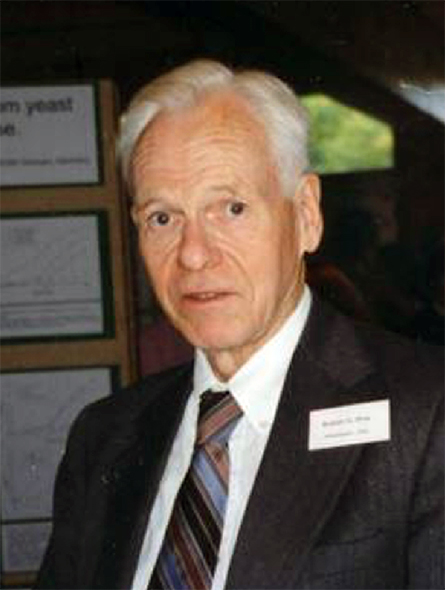 Courtesy of Joseph F. Hoffman
Robert "Robin" Lickely Post died Jan. 26 after a long illness. In a tribute, colleagues
wrote, "He was a patient and logical thinker,a thoughtful adviser, and a kind and
gentle colleague."

Robin Post was born Nov. 4, 1920, in Philadelphia. Following his undergraduate education at Harvard College, he earned an M.D. in 1945 from Harvard Medical School, and after an internship in Hartford, Connecticut, he joined the faculty of the University of Pennsylvania as an instructor in physiology. In 1948, he joined the faculty of Vanderbilt University Medical School in the department of physiology, where he rose through the academic ranks and became a professor of physiology in 1966. He remained at Vanderbilt until his retirement in 1991. At that point he returned, with his wife Elizabeth (who was also a professor at Vanderbilt and predeceased him in 2015), to Philadelphia. They lived in the Quadrangle retirement community in suburban Philadelphia and were active members of the Haverford Friends Meeting. Post was also a visiting professor in the physiology department at Penn.

Post first reported on the movements of sodium and potassium ions across the plasma membrane of human red blood cells in 1955 at a meeting of the American Physiological Society. He spent the remainder of his career investigating how the protein responsible for maintaining the cellular composition of these ions in almost all animal cells, called the Na/K-ATPase, carries out this active transport. To this day, one rarely encounters a publication on the Na/K-ATPase that does not mention one of his many groundbreaking studies.

In 1957, Jens Christian Skou published his observation that when adenosine triphosphate, or ATP, is exposed to crab nerve tissue, it is cleaved rapidly only when sodium and potassium, or Na and K, ions are simultaneously present. For this "first discovery of an ion-transporting enzyme, Na+,K+-ATPase," Skou was awarded the 1997 Nobel Prize in chemistry. (He shared the prize with John E. Walker and Paul D. Boyer, who were honored for elucidating ATP synthesis). The research community already knew that the ionic gradients across the membranes of muscle and nerve (where they underlie electrical activity) and of red blood cells — low Na and high K inside, high Na and low K outside — are regenerated continually, yet the mechanism remained unknown.

Post (with Philip Jolly) established in 1957 that Na and K ion movement across the membranes of human red blood cells is stimulated by the addition of adenosine — that is, it is metabolism-dependent — and that the ratio of Na exit to K entry is 3-to-2. These observations implied that during this process a net positive charge is ejected. These findings, along with those of Skou, suggested that the mechanism responsible, being present in two such diverse preparations, was likely to be of widespread importance.

In 1960, Post and his colleagues provided more evidence that the ATPase activity in red blood cell membranes participates in the ion movements and identified seven characteristics shared by ion translocation and ATP hydrolytic activity. Among the most striking was the completely specific inhibition of both processes by ouabain, which Hans J. Schatzmann in 1953 had reported to inhibit ion movements in red blood cells. Knowledge of the mechanistic basis of this drug's action provides a rationale for the widespread use of cardiotonic steroids to treat cardiac insufficiency.

Post then shifted his investigations to the enzymatic ATPase activity present in many cell membranes and over the next 15 years provided much of what we now know about how the process of active ion transport is coupled to the hydrolysis of ATP. In 1965 Post, with Amar Sen and Alan Rosenthal, established that the terminal phosphate of ATP becomes covalently attached to the protein as an intermediate state during the process. Soon after this, Post (with Shoji Kume, Thomas Tobin, Betty Orcutt and Sen) and, in separate studies, R. Wayne Albers and colleagues established that there are two interconverting forms of the phosphoenzyme, and this E1P–E2P model became the central characteristic of what now is referred to as the Albers–Post model for the molecular mechanism of this class of enzymes, the P-type ATPases.

These membrane proteins are responsible for the active transport and homeostasis of Na, K, calcium and many other metal ions in almost all cells. Their action underlies various physiological processes, including muscle contraction, digestion, gastric acid secretion, kidney function and neurotransmitter biosynthesis. Their disruption causes an array of human diseases. These proteins couple the translocation of ions across cell membranes using the energy derived from ATP hydrolysis to drive the ion transport.

Post's major contributions also include the realization in 1973 that a specific aspartate amino acid residue on the protein accepts the phosphate group in E1P and E2P, and in 1972 that, following release of the phosphate, the K ions are occluded (or trapped) within the protein as a transport intermediate. The multiple modes of transport carried out by these proteins are rationalized in the context of the Albers–Post mechanism.

It is worth recalling what Skou wrote in his 2017 memoir: "Though I had opened up a new field of research, I did not subsequently make any decisive contribution to the further understanding of that field, and therefore doubted that I deserved the (Nobel) prize even when awarded it."

Skou then singled out Ian Glynn (whose rigorous dissection of the many modes of ion transport mediated by the Na pump provided a basis for coupling transport to enzyme activity) and Robin Post (whose cleverly designed experiments and beautiful logic placed the central roles of phosphorylated intermediates and occluded cations at the center of our pictures of pump action) for their contributions, having provided the most important information for the understanding of the pump mechanism. "I would have liked to have shared the Nobel Prize with them," Skou wrote.

In his youth, Robin Post was an assiduous jogger and avid sailor. During his career, he was a widely appreciated inspiration to those familiar with the man and his work. He was a patient and logical thinker, a thoughtful adviser, and a kind and gentle colleague, particularly to young investigators. His scientific contributions live on, and his passing is a great loss to all of us who knew him and valued his presence.

Jack H. Kaplan, professor emeritus of biochemistry and molecular genetics at the University of Illinois College of Medicine at Chicago, is a leading authority on the structure and function, biosynthesis, assembly and trafficking of P-type ATPase ion pumps and on copper transport and homeostasis in human cells.

Paul J. DeWeer, emeritus professor of physiology at the Perelman School of Medicine at the University of Pennsylvania, is a leading authority on the kinetics and thermodynamics of the Na/K-ATPase sodium–potassium pump.

Joseph F. Hoffman, professor emeritus of cellular and molecular physiology at the Yale School of Medicine, is a leading authority on the physiology of red blood cells, particularly the mechanisms of plasma membrane movements of salt and water.